By sungirl (self media writer) | 2 years ago

Planet Earth is home to a vast number of animal and plant species. It is estimated that there are about 8.6 million living species that have been discovered. However, still more than 80% of the species remain undiscovered. Nevertheless, this one species is so magnificent that it is widely regarded as the toughest on Earth. These are the Tardigrades.

Also known as Water bears, Tardigrades are a Phylum of microscopic 8-legged organisms which are about 0.5mm in length and live in water. However, these mighty small creatures can survive any adversity that comes their way including extreme temperatures, extreme pressures (both high and low), vacuum, radiation, dehydration, and starvation for decades without dying. They can endure pressures that are 6 times more than those felt at the deepest point in the ocean which means Tardigrades can withstand 6500 times more pressure than what is felt by a human at sea level.

These little creatures can survive for almost 30 years without food or water. When faced with such a situation, they can squeeze out 99% of the water in their bodies, pull in their body parts, curl up into a little sphere, and become dormant. Space and The Moon

Tardigrades are the first known animal that can withstand the cruel conditions of outer space. In September 2007, Tardigrades were carried into the lower Earth orbit on the FOTON-M3 mission bearing the BIOPAN payload. For 10 days, groups of Tardigrades endured harsh and severe conditions of space like a complete vacuum, ultra-violet radiation from the sun, and subzero temperatures without any protection. After coming back to Earth, scientists we able to revive over 70% of the subjects 30 minutes after hydrating them.

Also, in 2019, an Israeli Spacecraft named Beresheet crash-landed on the moon. Scientists later revealed that a vessel containing Tardigrades may have survived that crash and Tardigrades might be found living on the moon!! 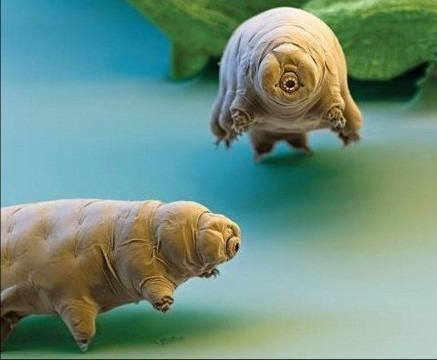 Hence these small creatures can survive anything ranging from a nuclear explosion to an asteroid collision. They really are the toughest in the world!

Content created and supplied by: sungirl (via Opera News )