Story of Russian family Isolated for 40 years, did not know World War II was over.

By Infosavvy (self media writer) | 8 days ago

At first, the pilot couldn't believe his eyes and had to fly over the spot twice just to be sure. but there was no doubt, the small clearing in the forest, the long dark furrows in the ground they could only have been made by a human hand. 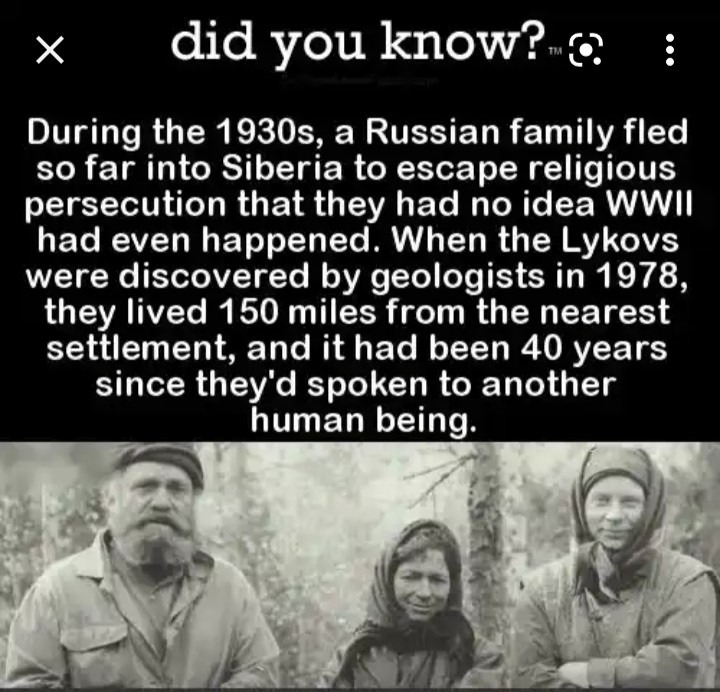 But who could be living some 150 miles away from the nearest human civilization?

The Siberian taiga is one of the harshest environments to leave thousand of square miles of dense pine forest. Tall mountains and impenetrable vegetation suited in a rugged region almost hostile and inhabitable for humans. For years, scientists believe that this vast region was just home to wolves, wandering bears, and whatever animals were capable of surviving the harsh climate. No human being would want to live in that place not even by mere coincidence.

It was in 1979 when a Russian pilot was searching for a spot to land a team of geologists when he spotted a little clearing up on a mountain some miles away from the nearest human settlement. Little did he know at that time that he has just found the home of the Lykovs - A family lost in time and somehow surviving in this country without seeing another human for 40 years. According to Dailymail.Co.Uk the Lykovs were old believers who were members of a Russian fundamentalist sect who have been persecuted since the day of peter the great in the early 18th century. When the Bolsheviks went into power following the Russian. revolution of 1917, many old believers fled to Siberia to avoid persecution. Things were to get even worst during the Stalinist purges of the 1930s when Christianity and other religions were outlawed. The Lykovs have been here for years unaware that world war II is over. The Lykovs endured a perpetual period of pain during their days of peril in the wilderness. However, before they were discovered the family had to endure harsh conditions in the wilderness. Tragically in 1981, three of Lykcov's family died, possibly of Modern diseases which their body wasn't immune to after coming in contact with the outside world. The only surviving member of the Lykov family who was rescued is presently in Russia, Latifa by name and age 77.