Here is the true story behind the fireflies John Glenn saw in space.

John Glenn is one of the people who holds a very special place in the history of US.He was among the first group of astronauts and also the first american to orbit earth.In 1962 February 20,he got aboard the friendship seven and blasted into the atmosphere.John circled the planet about three or five times while monitoring the mercury space craft.He also spent time watching the sun set and rise. 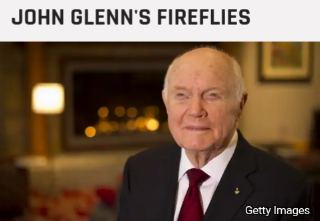 The fire flies also showed up.While circling the earth a second time,he looked outside the friendship seven and saw his space craft was surrounded by tiny glowing lights.Then Awestruck, john told the mission control that he was in a big mass of small of thousand particles that are brilliantly lit up like they are luminiscient.He described them as yellowish green and said that each of the orbs looked like a fire fly on a real dark night.

John and even NASA didn't know what was happening.Although some suspected extraterrestrials(Aliens)while some believed it was a miracle.Well that aside,this fireflies had simple more realistic explanation.The space craft was equipped with a vent which protected the astronauts bodily fluids,sweat and urine into space.When the liquid was put in space, it froze instantly and if the light hits it at just the right angle,the droplets will grow thousands of celestial fireflies.