How human being evolved. See what you need to know

By Meloboy_Hub (self media writer) | 2 years ago

We now realise that modern humans are just one of the African great apes.

So when and how did this radically changed perception come about?

In the 19th century the only evidence available for determining the closeness of the relationship between any two living animals was how similar they were in terms of what the naked eye could tell from their bones, teeth, muscles and organs.

The first person to undertake a systematic comparative review of these differences between modern humans and the apes was English biologist Thomas Henry Huxley.

In the central section of a small book he published in 1863, called Evidence as to Man’s Place in Nature, Huxley concluded that the differences between modern humans and African apes were less than those between African apes and orangutans.

This was the evidence the English naturalist Charles Darwin referred to in The Descent of Man in 1871.

He speculated that because African apes were morphologically closer to modern humans than the apes from Asia, then the ancestors of modern humans were more likely to be found in Africa than elsewhere.

Developments in biochemistry and immunology during the first half of the 20th century enabled the search for evidence of the relationships between modern humans and the apes to shift from macroscopic morphology to the morphology of molecules.

The results of applying a new generation of analytical methods to proteins were reported by the Austrian-born French biologist Emile Zuckerkandl and American biologist Morris Goodman in the early 1960s.

Zuckerkandl used enzymes to break up the protein component of haemoglobin into its peptide components. He showed that the patterns of the peptides from modern humans, gorilla and chimpanzee were indistinguishable.

Goodman used a different method, immunodiffusion, to study albumin, a serum protein. He showed that the patterns produced by the albumins of modern humans and the chimpanzee were identical. He concluded that this was because the albumin molecules were, to all intents and purposes, identical.

Proteins are made up of a string of amino acids and in many instances one amino acid can be substituted for another without changing the function of the protein.

In the late 1960s, the American anthropologist Vince Sarich and New Zealand biologist Allan Wilson exploited these minor differences in protein structure and concluded that modern humans and the African apes were very closely related.

They also provided the first molecular clock estimate of modern human-African ape divergence, dating the split to only around five million years ago. This date was less than half of contemporary estimates based on fossil evidence.

In 1975 the American human geneticist Mary-Claire King and Allan Wilson showed that 99% of the amino-acid sequences of chimpanzee and modern human blood proteins were identical.

The discovery by James Watson and Francis Crick, with unwitting help from Rosalind Franklin, of the basic structure of DNA, and the subsequent discovery by Crick and others of the nature of the genetic code, meant that the relationships among organisms could be pursued at the level of the genome.

Nowadays technological advances mean that whole genomes can be sequenced. Over the past decade researchers have published good draft sequences of the nuclear genomes of the chimpanzee, orangutan, gorilla and the bonobo. 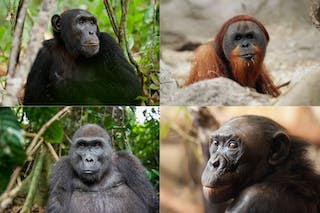 More and better data are steadily being accumulated, and in 2013 a review of ape DNA based on the genomes of 79 great apes was published.

These new ape genome sequences support the results of earlier analyses of both nuclear and mitochondrial DNA that suggested modern humans and chimpanzees are more closely related to each other than either is to the gorilla.

When DNA differences among modern humans and the great apes are calibrated using the best palaeontological evidence for the split between the apes and the old world monkeys, those differences predict that the hypothetical common ancestor of modern humans, chimpanzees and bonobos lived about 8 million years ago.

The rise of the hominins

Most researchers now recognise the modern human as hominins.

Still, the question “where do we come from” can from a scientific perspective be difficult for someone outside of the discipline to come to grips with. In part this is because the fossil record for human evolution seems to grow exponentially, with the author of each new discovery often claiming that the textbooks need to be rewritten.

The interdisciplinary nature of palaeoanthropology also means that new evidence that helps us make sense of our ancestry does not always come in the form of new fossils.

It comes from advances in a range of disciplines that include archaeology, comparative anatomy, earth sciences, evolutionary biology, genomics and primatology.

A further complicating factor is that the human fossil record does not just consist of the fossil evidence of our direct ancestors.

Many of the fossils belong to lineages that do not make it to the surface of the Tree of Life. They belong to extinct close relatives, and the task of sorting close relatives from ancestors is one with which we are only just now beginning to grapple.

There is a lineage that leads to today’s Homo sapiens, but there are also a host of side experiments that are equally important to understand. They represent some of the most interesting chapters in human evolution.

Origins of the genus Homo

Understanding the origins of our own genus Homo means establishing what fossils we recognise as being the first early humans.

Sometime before 4 million years ago we see the first evidence of the genus Australopithecus. These fossils sample the kind of creature that was most likely the ancestor to the genus Homo.

Around 2.5 million years ago we see the first fossil evidence of species in Africa that many argue belong to our own lineage. One of these, Homo habilis, almost certainly made stone tools, had a slightly larger brain than Australopithecus, stood upright and regularly walked on two legs.

Some recognise a second species, Homo rudolfensis, about which we know even less.

These possible human ancestors lived alongside close relatives that were almost certainly not our ancestors. These species are called Paranthropus or robust australopiths – they had small brains, big jaw bones, large flat faces, and huge chewing teeth.

They lasted for at least a million years, so whatever they were eating (which is still a mystery) they were successful in the sense that they lasted as long in the fossil record as the average mammal.

But some researchers think that Homo habilis and Homo rudolfensis are not different enough from the australopiths that preceded them to justify being included in the genus Homo.

They claim that the size and shape of their body and the size of their teeth and jaws was little different from that of the australopiths. This means that their locomotion and diet had not shifted far enough in the direction of pre-modern Homo species such as Homo erectus to justify inclusion in Homo.

Tool making is not enough

Also, because it is becoming evident that australopiths may have been making tools earlier than Homo habilis it means that tool-making can no longer be seen as the sole prerogative of Homo.

There is a developing consensus that the relaxation of the criteria more than 50 years ago that saw the inclusion of Homo habilis into the genus Homo needs to be reconsidered.

Species that emerge slightly later from Africa, such as Homo ergaster, fit much more clearly within what we understand by the genus Homo. That species probably left Africa around 2 million years ago and migrated ultimately as far east as China and Indonesia where it evolved, eventually, into Homo erectus.

A number of further migrations out of Africa probably occurred after the initial Homo ergaster migration, one of which, Homo heidelbergensis, is considered by many palaeoanthropologists to be the ancestor of both Neanderthals (Homo neanderthalensis) and modern humans (Homo sapiens).

As far as we know, Neanderthals evolved outside of Africa, perhaps in response to the ice ages of Europe. Our ancestors remained in Africa where perhaps as early as 300,000 years ago, as revealed from recent redating of the Moroccan site of Jebel Irhoud, were well along in the process of evolving into modern humans.

So the origins of ‘us’

Once we get to the origins of our own species Homo sapiens we have the added advantage that we are able to now use next generation sequencing methods to recover ancient DNA (aDNA).

As geneticists recover ancient genomes from different extinct hominin species, they are generating insights that are not possible from comparing the anatomy of the fossils alone.

There is now fossil evidence from teethto suggest that Homo sapiens may have been in China by 120,000 years ago and in South East Asia by 67,000 years.

The discovery of some distinctive modern human DNA within the DNA recovered from a Neanderthal fossil suggests that modest interbreeding was occurring between Neanderthals and modern humans in Central Asia by 100,000 years ago.

Modern humans have not shared the planet with another hominin species for several tens of thousands of years. But before that, in the past 300,000 years or so, there is fossil and DNA evidence of several hominin species, including the recently reported archaic hominin Homo naledi

First and foremost there was Homo neanderthalensis, whose range overlapped with modern humans in the Near East. Neanderthals most likely became extinct as a result of direct competition with the more technologically sophisticated Homo sapiens.

The evidence from DNA shows that there was interbreeding between our species and pre-modern humans, including the Neanderthals and the other enigmatic hominin referred to as the Denisovans.

We do not yet know how and when Homo erectus became extinct. It would appear that another unexpected side experiment in hominin evolution, known from the island of Flores and called Homo floresiensis most likely became extinct sometime after 60,000 years ago.

Indeed this hominin may represent something far more significant than simply an interesting side experiment, with many leading palaeoanthropologists arguing that the Hobbit may represent a pre-ergaster migration out of Africa.

Content created and supplied by: Meloboy_Hub (via Opera News )