By AdekunleG (self meida writer) | 1 months

Be honest, what crossed your mind when you read the title?

It will be some geographical or zodiacal rant? well, it’s not but still it has left many scientists and nuclear analysts sleep eluded as to why there was something so unprecedented happened when Lava met Ice.

Scientists never tire from executing the weirdest experiments in and when something really comes off from that, they pride on that, quite obviously. Scientists are our true north who unearth the wonders of the nature through their out-of-the-box and unheard experiments to bring the nature’s inherent mysteries to the fore, some times they succeed, sometimes they fail but every time they learn something or the other, so do us. There is dime a dozen about scientific experiments, scientists face winds of dissent, their intentions are brought under the scanner, they have to burn the midnight oil and compromise on their sanity while obsessing over a matter, they face damning strain of despair but oddly enough, the same team is celebrated when the research becomes successful.

This time round, scientists have gone an extra mile to find out what happens when the two extreme natural elements, such and Ice and Fire meet and the crosshatch produces.

There was a video that has been doing rounds for quite sometime in social media after it was first introduced in YouTube about the experiment and bytes from scientists who carried this out.

Lava Meets Ice experiment reminds us of two things, When Harry met Sally and the Song of Ice and Fire, jokes apart, let me cut to the chase as to what really happened when the scientists poured some molten lava on deathly cold ice. Well, the amount of Lava that has been poured over the ice can’t also be trifled with because apparently, the amount was hundreds of kilograms. This experiment had a purpose, that is to comprehend what impact it would do on communities living near the fleeting distance of ice-covered volcanos. The experiment, however shed light on the matter that when it happens, there are the high chances of enormous catastrophes occurring. 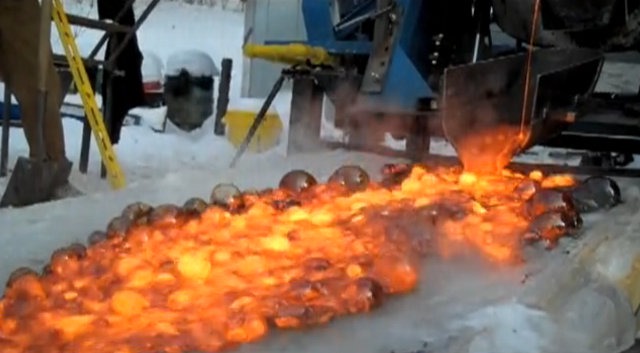 As per a study, there are 200 such volcanoes that are covered with ice and on the verge of eruption which is really an alarming concern. If you look at the picture carefully, there have been tons of Lava poured on an ice-bed and the end product were lots of clack bubbles and scientists are still brain storming over the probable cause of such a result. They pledge to extend help for the remote and impenetrable sites where ice capped volcanoes are located.

There are more to nature than what meets the eye, nature is more arcane to a measure that is beyond our imaginary boundaries and such experiments give testimony to the fact

Content created and supplied by: AdekunleG (via Opera News )

Osinbajo As Poverty Reduction Committee Chairman: A Round Peg In The Round Hole

If You Or Anyone You Know Easily Get Angry, See 5 Foods That Help To Control Anger