Detailed Explanation Of The Eighth Planets

By Paulchimex1 (self meida writer) | 5 days 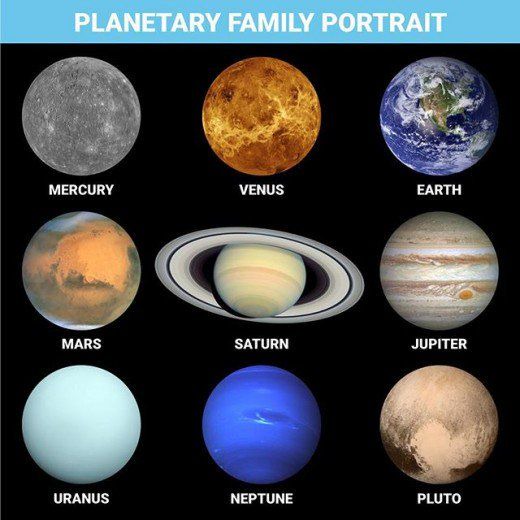 Back in the days, people studied the night sky observing the object with their naked eyes. During this time, the planets appear as bright specks while the stars show no visible change in their position in the sky, the planets seen to be moving. In the night, planets appear bright like stars because they reflect right from sun.

Mercury, Venus, Jupiter and Saturn are very bright and can be seen with the naked eye. Uranus and Neptune can only be seen with telescope.

Hope you understand the introduction okay, Let explain the eighth planets one after other.

The Eighth planets in the Solar

System are as follows:

Among all other planets, Mercury is the closest to the sun. It is also the smallest planet in the solar system. It has no satellite, Mercury completes a full revolution around the sun in 88 days. Interestingly, Mercury does not have an atmosphere.

Mercury's orbit is oval-shaped. On some occasions, Mercury can be viewed from Earth.

Venus is the second closest planet to the sun. Venus is also the hottest planet on the solar system. It is the closest to the Earth. Venus has the longest revolution and rotation times of any planet in the solar system. Venus takes 224.7 Earth days to revolve around the sun. The rotation of Venus on its axis is so slow that it takes the equivalent of 243 Earth days to complete a single rotation.

Planet Earth is the only planet known to host life. It completes a revolution around the sun every 365.256 days. It is 92,955,820 miles away from the sun and is the third closest planet to the sun. 71% of Earth is covered by water while the remaining 29% is land. The Earth’s atmosphere protects life from uninhabitable space, shields us from harmful radiation, and controls the weather. Earth is the densest planet in the Solar System. The planet Earth has only one satellite which is moon.

Do you understand, okay let move on. 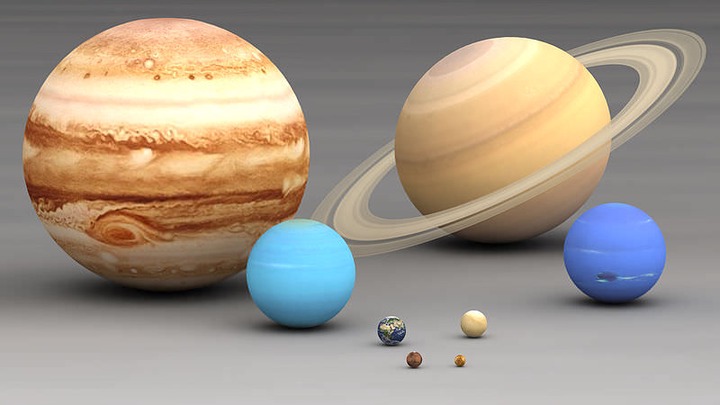 Mars, is the fourth planet in the solar system as well as the second smallest one. It has a solid surface just like the Earth, but its atmosphere is thin. Mars is half the size of the Earth. It is sometimes visible from the Earth in the evening due to its bright surface. Liquid water is not found on the surface of the planet due to the low atmospheric pressure.

Jupiter is the fifth and largest planet in the solar system. Along with Saturn, Uranus, and Neptune, Jupiter is considered to be one of the Solar System's gas giants. It is a gaseous planet meaning that it has no solid surface. Jupiter is so large that 1,300 Earths would fit inside it. The planet has three rings made of dust particles that are difficult to see. It takes 12 Earth years for Jupiter to make a revolution around the sun. It has four large moons and many of smaller ones.

Saturn is the second-largest planet in the solar system after Jupiter. It is a gaseous planet just like Jupiter but has nine continuous rings and several ringlets made of rocks and ice. It is considered the most beautiful planet in the solar system and is composed of hydrogen and helium.The diameter of Saturn is nine times biger compared to the Earth. Saturn has nearly 150 moons.

Uranus is the third-largest planet in the solar system. Its surface is composed of a frozen component and it is therefore considered an ice giant. However, its atmosphere is made up of hydrogen and helium alongside other “ices” such as methane, ammonia, and water.

Although it is not the furthest planet from the sun, it is the coldest planet. Uranus is the only planet that does not radiate heat from its core. Uranus is around 2 billion miles from the sun.

Neptune is the furthest planet from the sun. It is nearly 2.8 billion miles away from the sun and completes a revolution round the sun every 164.8 Earth years. It has 14 known moons with Triton being the largest. Its atmosphere consists of hydrogen and helium. It is the windiest planet in the solar system, hosting nine times the average wind speed of the Earth.

That is the end. If you have any questions feel free to ask your question okay.

Content created and supplied by: Paulchimex1 (via Opera News )

34 Amazing Pictures That Are Not Photoshopped