By Dablizz (self media writer) | 2 years ago

If you’re a perfectionist, this article is for you. Also, if you’ve got insanely high expectations of workers – in which case you’ll be glad to see workers doing their jobs correctly. These amazingly satisfying photos are nothing but pleasing.

Usually, when you go to buy a shirt and see a stack of t’s, you have no choice but to unfold them to see the final design, which means most of the clothes left will be a mess. However, when you have medal-worthy staff, you can get shirts folded so perfectly and aligned that they show the design from the side.

I assume most IT departments or server warehouses look like a real mess. An impossible maze of wires that’ll take you 5 years and 3 months to navigate. That is unless you have the person who organized this working for you.

The organization here is a thing of beauty. Until you have to replace a bad wire, in which case all those ties have to be removed.

I really thought most tire stockpiles look like this.

A tire-ring mission should you have to find the specific rubber ring that been requested. That is, until I saw this satisfying photo of a perfectly organized tire stockpile. 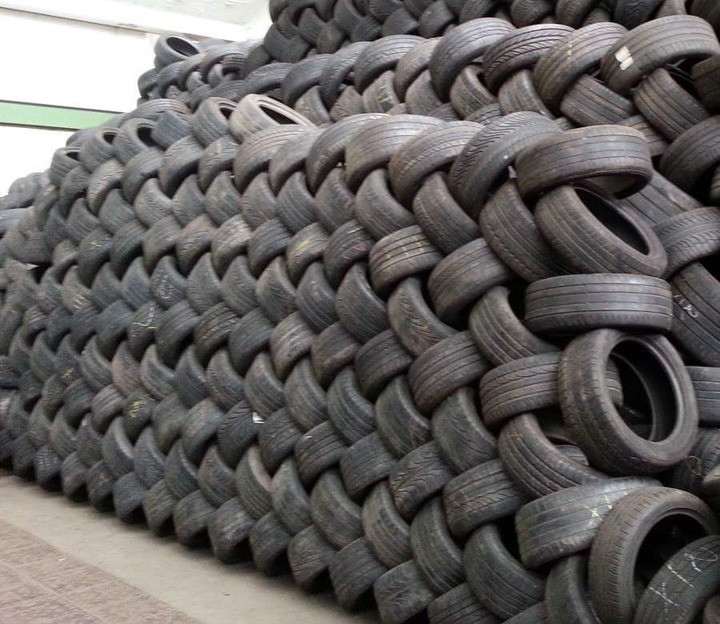 This is known as ‘lacing’ and it’s the most space-efficient way to store tires.

Clearance items piles literally always look like a dump – an area that items are just thrown into. What we really need are local heroes like this guy organizing them for us.

Let’s be honest, he’s probably in the middle of exams looking for any potential opportunity not to study. Either that or he’s evil and the photo order is reversed.

Mowing the lawn in stripes is satisfying, but nobody has anything on this guy – intricately cutting the grass into a seriously cool design.

Going by the haircuts some players display these days, it’s obvious where the idea came from.

Most supermarket shelves don’t usually look neat – carrots just were thrown on top of each other without much organization. If they had perfectionists working for them though, they’d get something like this satisfying photo.

Great, until the first customer comes along and says… ‘I’ll take that one’.

Corner shelves are notoriously difficult to stack, which is why you need to hire a professional cherry stacker.

Another hypnotic display of wire organization that gives me fear to look behind my own computer.

What happens when you need to replace the ‘purple’ wire though?

This whole foods display is mesmerizing, the creator even created the great pyramids of cucumber in the center!

But LOOK! SOMEONE MESSED UP THE PEPPERS ON THE LEFT-HAND SIDE! For the love of perfect symmetry why tell me WHY !!!

Although I applaud the symmetry of this satisfying photo, I have a few problems with it.

First and foremost, what’s with the limited variety? Secondly, it should clearly be: red, orange and then yellow. Finally, it looks like the bottles are actually supporting each shelf, so you’re basically playing Jenga here – make sure you have your wellies on!

This color-coded book layout is pretty.

But it’s highly impractical for anyone else than the person who has the intimate knowledge of the color of every one of those titles. Here’s another one also.

It’s also probably rather disturbing to those of you who’d prefer it to be size-ordered.

As if the sight of an Oreo wasn’t beautiful enough, you have this satisfying photo.

Now it’ll be totally obvious if someone went in the cookie jar.

This desk at a university library is made up of perfectly fitted books.

They’re all real books, which is great unless you actually want to take out a book, in which case this is a nightmare.

Japanese Department Stores know how to stack socks, this is really beautiful.

Except for that beige pile, someone’s clearly tampered with it. Same with that yellow one sticking out a little.

This has got to be wedding hair perfection, especially if her name is ‘Rose’. I wonder how it lasted and looked the day after.

The creator of this display definitely wasn’t drinking any of that beer.

If the driver of this truck packed all that wood in the back of it he’s seriously missed his calling as a professional Tetris player.

It also makes me wonder how much time it took him to cut and place each of those logs, they must have been heavy. Either that or there’s a fake door on the back and the truck is actually full of heroin. I’m calling it!

If only this guy was there to oversee the construction of the Tower of Pisa.

The concentration on his face says it all. He’s even managed to hypnotize his chef to the left.

This guy needs some tips from the truck driver we saw earlier on.

Nonetheless, without cutting the logs this guy has done a great job. I’d keep my distance though, flashbacks of Final Destination tell me it’s not a good idea to be behind this one.

NOW THIS is a display.

Bravo to the veg stacker out there who made this masterpiece. You deserve the turnip prize for this one.

Even if I needed a coat hanger I would not buy one from this place.

Destroying a display like this would be criminal. Just look at how perfectly that top shelf is aligned. Sleek and aesthetically pleasing.

Ohhhhh yeah, these are just beautiful.

I just pity the guy that has to replace a cable from the center of one of these piles.

These boxes fit sooo perfectly into the back of the truck.

It may seem simple but considering they had to deal with the wheel wells, we’re likely witnessing a king stacker here. Either that or we’re witnessing someone who has created a false top of boxes and is smuggling things or people underneath. Kind of reminds me of this.

These bottles fit so perfectly on the shelf.

Shame they couldn’t organize the labels as nicely.

Now, THIS is an organic display!

I’m just stressing about those radish’s toppling over though. That’s an accident waiting to happen.

More cables here for the cable enthusiasts among you.

This one looks like it came straight out of a spaceship.

Bananas are my favorite fruit. This display would definitely get my approval.

Unlike the others, you can take a pair without wrecking the whole display. That lime green bunch in the second row from the bottom needs to go… it doesn’t belong there… it’s wrecking the rest of the display..

This candy display was clearly made by an expert perfectionist.

But my question is, how do you get those junior mints when the ones in the center are gone? I sort of also feel an overwhelming urge to mess it up.

Those stickers make me peel slightly uncomfortable about this one but other than that you have to applaud the apple stacker here.

If only they could do the same thing to the ones of the left and right.

This cabling job at a private residence in Ft. Lauderdale is almost perfect.

Let’s just hope someone doesn’t put a nail through that drywall! It’s satisfying, though that black area is annoying me.

If any bartender I see cuts and lays out the limes at work like this, I’m straight up giving them a tip.

Flowers are super delicate items to transport, so they need to pack them tightly and efficiently, which is why we get awesome pictures like this.

Someone’s peeked inside a supermarket flower delivery truck and it looks beautiful!

The good bars out there always have their bottles on show, and some are better than others. I honestly don’t think I’ve seen a more clean and impressive display than this one though.

Look how evenly spaced they are! The only problem is that you’ll have to be rather tall to work here.

Peas are usually pretty irrelevant – we mash em together or pour them onto our plate without much regard. That’s why this picture really is apea-ling to me.

Look at this stack of sheetrock.

It’s lined up so nicely. The only issue is there isn’t much continuity in the pattern between the stacks. A- for effort here.

NOW THIS is cable management.

Somebody is obviously being paid hourly here. It’s freaking beautiful, just look at the attention to detail with those fasteners.

Igloos are super cool, and really satisfying designs to look at. Do you know what’s more satisfying though? One made from wood.

Tools are often stored messily. I mean, there are some neat pictures of tool storage out there, like the organisation of these wrenches, I didn’t know there were so many sizes.

Maybe he just has so many spares? But this one definitely takes a hammer to them.

I salute this studley tool chest.

Packing stuff tightly saves a load of money on transportation. That’s why shipping containers are such an amazing creation. So, when you have to transport or store a load of tanks, take a lesson from the person organizing these tanks.

This door and the circular window above it work so well.

Plumbing can be messy and rather a pain to look at. But when it’s done nicely, it can be a seriously aesthetically pleasing feature. Just look at this really nicely arranged plumbing!

When you shave a pencil, do you ever try to keep the peel intact throughout? I know I do. Seems as if this person owned it.

I’ve never made such a long, in-tact peel.

This is real Tetris experience at work.

Look at those taster tots! Someone really deserves a raise.

Whoever has the patience to organize a load of grains definitely has too much time on their hands.

Not that I care that much though, because this is freaking awesome. Look at those layers!

When your hoover fits perfectly under a cupboard like this one, you know you’ve made it in life.

Which was the most satisfying photo? Let me know in the comments section down below!

Content created and supplied by: Dablizz (via Opera News )