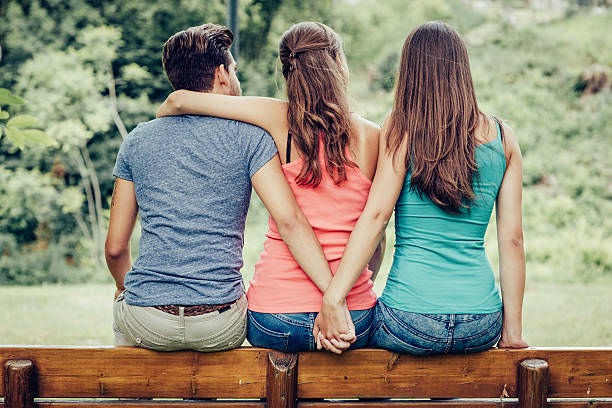 I have heard so many stories of girls complaning of being cheated on for years without finding out because these guys have honed the art of maintaining several relationships at once without either parties knowing better, and this was what prompted me to write this article, although, while i realise that to every rule there is always an exception, and the fact that these signs are visible in your relationship doesn't 100% guarantee that he's cheating, but the presence of these signs should make you suspicious enough to dig deeper and find assuarance before you end up getting your heart broken. The telltale signs that shows you might be a side chick on your relationship include; 1. He never talks about personal things with you: Some guys will use the excuse that they are a very private person to avoid having deep and personal conversations with their partner. This doesn't mean that you won't talk about other fun things or he might even be curious to know personal things about you, and so you might not have noticed that he doesn't talk about himself that much. Opening up and communication is an essential part of an healthy relationship and if you're lacking in that aspect, then you should talk things through with your partner. 2. He avoids taking you to meet his family and friends: Isn't it somehow to be dating someone whose close circles you have not been acquainted with. This has different levels, some guys will introduce you to their friends, but not family because their friends have been intimated about your side-chick situation, and some guys won't even allow you to meet their friends talk more of their family. This is a red flag you should look out for. Except you are in a casual relationship leading to nowhere, you should be significant enough to show off to his circle circles of friends and family. The excuse of privacy can work for the first 3 months or so, when you guys are still building something new, but after that new found love period, coming out into society as a couple should definitely be the next step. 3. He avoids your calls, and disappears for a while: I have a personal experience with this very one, he will ghost me for a couple of days, and then come back as if nothing happened, and questions like "why was your number not going through, why did you disconnect my video call" will get flimsy excuses like "oh, stop nagging me about insignificant things, the network was bad, or i couldn't charge my phone, thieves stole our transformer" if this happens once, then it might be genuine, but once it becomes more than two times, then queen, you have every reason to be suspicious, because those period of unavailability just means he's available to someone else that is not you. 4. You only hang out in your place or an hotel, or you are not allowed to go to his place unannouced: I believe this point explains itself. The fact that he is always sensitive about you being comfortable enough to have unscheduled visits to his house is a bright red flag right there, it shows he has something to hide, and he's avoiding a clashed visit between the main chick and the side chick, so it would feel as if you are in a long distance relationship with someone who isn't even far away. 5. His phone or personal computer is off limits, or he moves away from you whenever a call comes in: Technology has allowed us to save lots and lots of information on our mobile device, and no matter how good you are in being secretive, your phone might make you slip up and reveal all your dirty little secrets, from senstitive nude pictures, to saucy messages, or even bank transfer reciepts, to actual phone calls coming in, to social media conversations, so if his phone is off limits because of whatever reason he gives, it means he has something to hide, it is that simple. Normal people won't lock an empty box, it's as simple as that. 6. He doesn't like public display of affection- PDA could range from going out together and holding hands, to snapping cute couple pictures you can upload on social media, if he tells you he doesn't like showing off your relationship to the world, it might mean one of three things he's a private person, or an introvert, or you're a side chick, think deeply and pick which group you fall into. 7. Your time together is always scheduled and limited: I get that some guys actually have busy schedules, but when you come together and in your brief time together you just hook up and he gets ready to leave almost immediately, then the phrase 'wham bam thank you ma'am' should definitely ring alarms in your head. If he cancels plans with you for flimsy reasons, or important dates like Valnetines day or he can't spend time with you on his birthday because he is just so busy, then reconsider your main chick role in his life, because he just might not be that into you. Thanks for reading through. Follow and like for more insightful articles. You are also free to disagree and offer your counter points in the comment session, I would love to listen to your opinions and experiences regarding this topic and also learn from you.