A baby boy named Brooks from Burnsville, Minnesota was born with just one leg. In March, his mom shared a video of him standing on two feet and dancing for the very first time thanks to the use of a prosthetic limb. 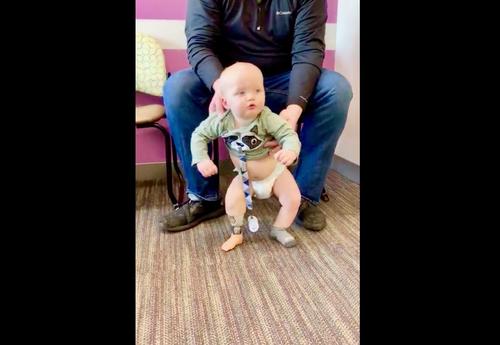 There are plenty of things that people take for granted in life. For instance, the ability to walk, run, and most importantly, dance. Brooks, though only one year old, had yet to experience any of those joys. He was born with a unique medical condition that left him with only one leg.

Originally, doctors believed that his chance of walking would be relatively low due to the nature of the condition. However, shortly after he turned a year old, he received his first prosthetic leg. Supported by his dad, his mother caught the adorable footage of Brooks standing on his own two legs for the first time. The little guy was so excited he couldn't help but dance with joy. 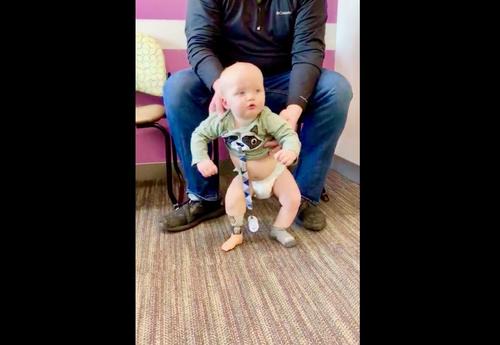 According to Daily Mail, when he was born, Brooks had a relatively rare medical condition. His leg, effectively, was a stump with a singular digit growing out of it. Due to the way the leg had formed, it wouldn't be correctable in the future. Doctors weren't entirely certain that they would be able to correct the deformity to provide young Brooks with a prosthetic leg in the future.

Thanks to diligent research, many doctor's appointments, and surgery to remove the extra digit attached to his stump, however, doctors were able to carefully create a prosthetic that met all of young Brooks's needs. This process — from the development of the leg to the preparation, imaging appointments, evaluations, and surgery — took just over a year. Once finally complete, however, Brooks's medical team was able to present him with his very own prosthetic limb. 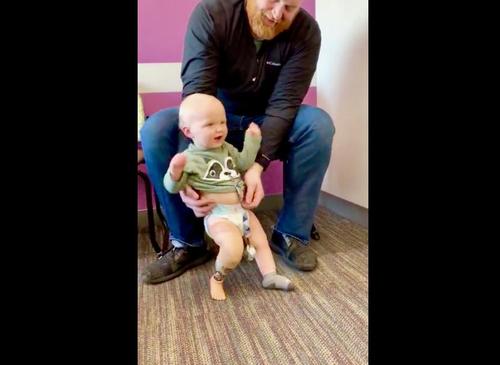 Once they had it on, Brooks' dad helped him stand on his own two feet for the first time in his little life. Prior to his prosthetic, Brooks wasn't entirely immobile. He was still able to crawl and move independently. Doctors simply feared that due to the nature of his condition, he would never be a good fit for a prosthetic and would be unable to walk.

You can see the absolute surprise and joy in Brooks' face when he realizes that he's standing — even if it is with the help of his dad for support. Once he got his balance and figured out exactly how the whole "having two legs" thing worked, Brooks did what most babies, and even adults, like to do when they're happy and excited, and he broke out in dance. 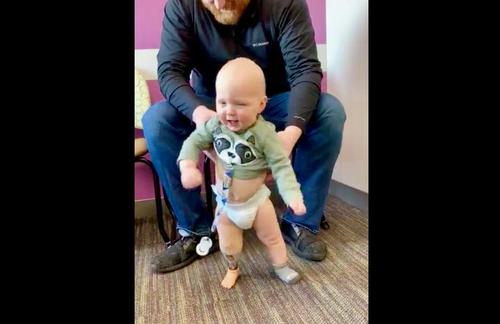 Brooks' mom, thankfully, thought to capture this wonderful moment when he tried on his new leg on video. Within moments of being placed on the ground, Brooks is waving his arms in the air, bouncing, and rocking back and forth. He has the biggest smile on his face. He's very obviously excited that he can do the one thing other kids could that he could simply never quite catch up on.

At one point, he gets down with it, crouching low to the ground in one of his awesome dance moves. A moment later, he bounces back up, the biggest smile on his face. You can also see his dad in the background, grinning right along with him. He's supporting Brooks because let's face it — learning to walk is difficult for any baby, especially those who only just got their land legs.

Let us know if you think that this video is as adorable as we do in the comments!