25 Signs that say You’re Wasting Time In a Relationship

By Ubongetimanthony (self media writer) | 16 days ago 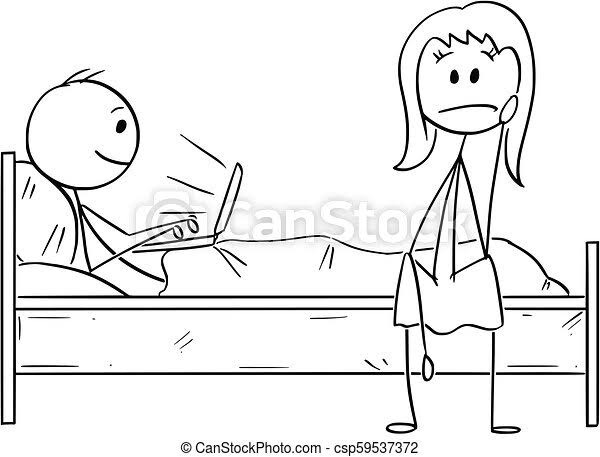 When you ask to change things up, like maybe go out to eat rather than stay in for the millionth time, they may grunt or protest. When you suggest something new in bed, they may take it personally. In essence, things tend to be the same on a daily basis with no room allotted for change.

2. The relationship is stale:

Not surprisingly, things get stale really quick. You might know what to expect, and even consider it a comfort zone at first, until things just…grow dull. If you want romance, you have to plan for it yourself, and even when you two do go out, your partner might not be as open during the occasion as you’d like.

This is another sign that many women mistakenly use an indicator of a guy who’s wasting their time.

It could be, but again, this also often more a reflection of his personality.

Some men are highly effusive in public while some others tend to keep the romance behind the curtains.

Some men show little public affection, but that doesn’t necessarily mean that there's no love.

4. Your Lover keeps you away from important people:

If they have friends or family members that they consider important, but keep you away from them, that’s a red flag. A loving partner will encourage you to meet these people, and spend time with them. They will rejoice at the thought of you befriending their friends. If this isn’t the case, and you’re kept away, something is wrong.

You have to ask for favors, or small things gestures. You have to ask for a drink of water, let alone flowers, or all of those small things that add up to a big picture. It can be hot cocoa, it can be a cup of coffee, or maybe even just car keys. Maybe a kiss before work, or a phone call saying they’re on their way home. These are things that are taken for granted until they go missing. Then we notice their absence. If you’ve noticed the absence, your partner isn’t doing the small things anymore, and you may have a problem.

6. Physical touch is a thing of the past:

simple touch, hand hold, a caress, a cuddle, and a peck on the lips all demonstrate affection. When these small gestures of love begin to fade, or seem to become mundane, and… lacking passion or love… you have your answer.

8. Your partner takes you for granted:

Do you come home with their favorite food, only to get a monotone "thanks"? Your gestures going unnoticed hurts a lot, even if they don’t understand it. When you bring it up, you feel like you’re nagging, and they either roll their eyes, or complain about all the small things you do that make you imperfect.

sometimes you find yourself telling your partner about almost everything, your day, pending projects, friend drama, family updates, and more. Maybe you’re open to talking about concerns, or issues in your relationship. But…does your partner do all of these same things.

10. Sexy and sweet compliments are rare:

"I Love You", is all you get every single time. This is actually easy to say, but sometimes that’s all it is: three simple words that you’ve grown accustomed to saying. If your partner isn’t actively being sweet, commenting on something attractive about you as a person, or anything of the sort, then you might be stuck.

11. Words rather than actions:

They say they will do one thing, but usually do the opposite. Honestly, can you expect the opposite of what they say at least a good 80% of the time.

Do you prepare for that outcome, just to be safe? A good example is this: does your partner constantly say they love spending time with you, but spend most of their free time with friends? Or say that they are in love with you, but treat you poorly and constantly scan the room for attractive would-be partners.

12. Bad habits with disregard for you:

It could be drugs, smoking, drinking, or actively spending money you don’t have. It can be anything that strains your relationship, and makes it hard to keep the peace. If your partner loves you, they will sacrifice these habits, and be inspired to improve themselves.

You should inspire each other, always. If this is not the case, and you realize they’re making poor choices, and hiding them from you so as to avoid the drama, then you’re not as important to them as you might think.

Again, a good couple inspires each other. Maybe the woman is creative and productive, and inspires the laid-back man to get off the couch. Maybe the man is intellectual and wise, and it makes the woman want to pick up a book or two. This is what a good couple does: encourage the other to improve, without demanding it.

You’re both into each other, you accept each other as you are, but you both improve for the other and for yourselves. If this isn’t the case at all, or seems too good to be true, then your partner isn’t motivated to change. You don’t inspire them enough, and it’s not your fault; it’s theirs, for being blind.

You both argue, yell, and annoy each other to no end. Perhaps one of you tries to calm down, or stay calm, but the arguing still occurs. Now, arguments are surprisingly healthy for a relationship, and encouraged, but there’s a rule: it’s how you argue.

A healthy couple will argue with the intention of having a discussion. Things might get tense for a minute, but eventually, both parties know to say sorry and sit down and figure things out. An unhealthy relationship, however, is marked by angry shouting matches with the sole intention of winning the argument, and not fixing the problem.

You want to live together, get married, and own a dog and a cat. Your partner wants to live in an apartment, with no pets, and doesn’t know about marriage. Two different playing fields. Two people in love will actively go out of their way to make sure they’re on the same page.

By now, the bad habits have been covered, as well as the common end goals. If things seem dire, it’s safe to assume there’s broken trust. You might feel like you can’t rely on your partner, and like there’s no reason to trust them, because when you do, you’re always let down. Broken trust is a major issue. You can fix it if you’re both keen on fixing it. Sadly, if only one of you actively tries to repair it, it will never work.

This is the biggest test of all. You could be with the perfect person, but it all boils down to you. Are you happy with yourself? Do you have self-love? Without that, there’s no way to love the other person. Now, if you do have self-love, but aren’t happy, and it’s due to your relationship, then you need to leave.

These signals include but not limited to these

-One day he’s all over you, another day he’s distant

-Today he talks about holiday together, then he’s not sure if he’ll have time

-Last week he texted 2 times a day, now it’s been 5 days and no single text

Anything that makes feel you like “it’s going somewhere” and then makes you unsure is the concrete sign of mixed signals.

22. He Talks About Other Women:

If he talks about other women, points to other women to ask your opinion, talks a lot about his exes, comments on other women’s attractiveness in your presence

Chances are he’s got more of a fuckbuddy/fuckboy mentality. Or he might be a chronic womanizer, or maybe even consciously willing to let you know he’s not serious.

In this case, it’s a strong sign that, if you want commitment then you need someone else.

23. No single act of jealousy:

Conversely, if he’s very open to talk about your ex or what you think of other men, that’s a sign that he’s not jealous at all.

Little jealousy could be a good thing… But no jealousy at all can also be a sign he doesn’t want anything serious.

Men who want their women for themselves should show at least a hint of protectiveness and jealousy. So no jealousy at all and him asking about other men is are big, big signs that he’s wasting your time.

Talking about his future without including you in it, can be a bad sign. Especially if you’ve been dating for a while.

If you just started dating, it’s not a big signal as it might simply be a guy who takes his time instead of rushing in.

These are the signs when he talks about:

-The places he wants to visit

-The cars he wants to buy

-The money he wants to make

To find out if he is wasting your time encourage him to talk about the future, and then see how he talks and related to the future.

Is it just him? Or is it both of you?

25. Low Level of Growth in the relationship:

Relationship that lead to committment often gets there following a path.

That path is not carved in stone, but there are a few common milestones that can provide you with good information.

It’s a bad sign if he avoids anything that would send the message that the two of you are growing closer, such as:

-Avoids doing anything on Valentine's day

-He has no idea where this is going

-The time you spend together stays the same eg.at his place Everytime

-Has some stupid rules about “no sleep overs”

Content created and supplied by: Ubongetimanthony (via Opera News )