On July 10th 2020, Reddit user Nadtacular decided it was the perfect day to do some landscaping around his house. After running down to his local Home Depot, he grabbed the biggest bags of mulch he could find and lugged them back to his home. Nadtacular was no stranger to sprucing up his property, so when he cut open the bags he expected the next few hours would involve some simple, good-old-fashioned mulch raking. What he got instead was the surprise of a lifetime.

As Nadtacular emptied the mulch, he discovered a baby squirrel curled up at the bottom of one of the bags. Tiny and hairless, this little squirrel was no more than a few days old — and in serious trouble. Without its mother, this pup wouldn’t survive long; not only was the baby squirrel unable to care for itself, but its lack of experience in the wild would make it easily susceptible to predators. Seeing no other choice, Nadtacular decided to care for the little guy himself. 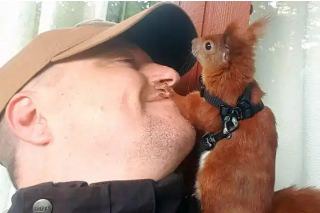 Nadtacular found detailed instructions on how to nurse the squirrel back to health online. With a special diet — and plenty of love and affection — he was confident that the little guy would recover. 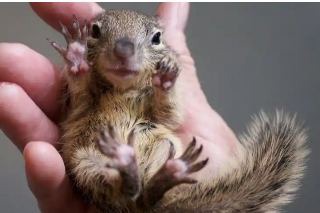 After only a few weeks the little guy was “eating like a champ,” according to Nadtacular. He’d even eat his food right out of his new owner’s hand! That’s a skill you could barely teach a cat, let alone a mulch squirrel. After four weeks, the young squirrel was finally strong enough to open his eyes and took in the world for the first time ever. What an incredible moment this must have been for Nadtacular to experience firsthand. 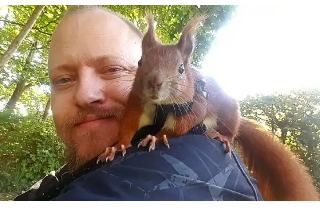 Just a week later, the squirrel had taken to his new environment so well that he even began to explore and play. Nadtacular loved how particularly zippy and full of life the squirrel was. He named him Zip. Not only was Zip energetic, but he loved a good cuddle, too. Even after he could run, eat, and play on his own, Zip was never far from Nadtacular’s side. The squirrel always welcomed hugs and belly rubs from the man who saved his life. . Without Nadtacular’s help, Zip likely wouldn’t have survived after falling out of that bag of mulch. Surprisingly, though, Zip wasn’t the only baby squirrel to have had a close call in a garden…