STRANGE BIRTH: Remember The Nigerian Couple That Gave Birth To A White Child. See What Happened

By Rachaeltiti (self media writer) | 2 years ago

Read this to the end and drop your opinion on the question asked. 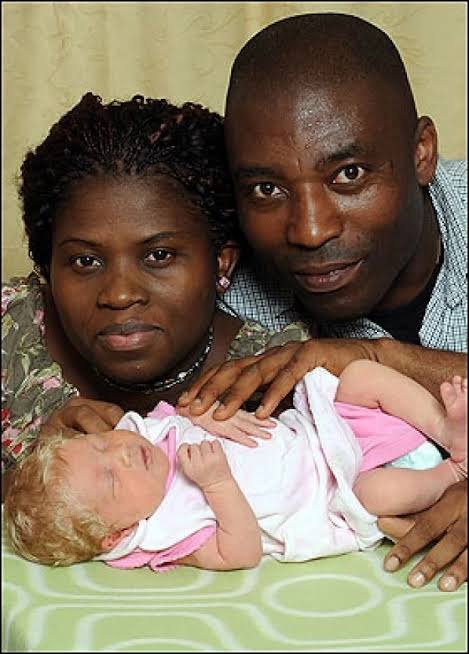 Firstly, I know the you will want to ask this question " Is this possible?"

Some time ago, A Nigerian Mother had given birth to a baby who was white. The babe had all the features of a white kid such as blonde hair and blue eyes. Shocking enough, the father was also a Nigerian black man.

Even though scientifically, it can be proven possible, this particular case offered many controversies because non of the parents had any white relative in their nearest family lineage. The parents were, Ben and Angela Ihegboro, and for many who heard the case, they had defied the principles of biology and science. They called the baby a miracle one and named her Nmachi (Beauty of God).

As usual there were many repeated talks of infidelity. Mr Ben, however believed the child was his, and he claimed that he was sure because according to him, his wife, Angela had always been true and faithful to him.

Although the parents accepted the situation, scientific and medical experts weren’t very satisfied on just calling it a “miracle” . Many Scientist tried their best to unravel the mystery that had presented itself. They tried to suggest Albinism but, it became clear and confirmed that she was not an Albino. Nmachi was definitely not an albino. Contrary to other reports, Doctors practicing at the London hospital where Nmachi was given birth to said that they have not rejected the possibility of this recessive disorder which affects skin pigmentation, the BBC report had stated.

A professor of the Oxford University, England said;

A lot of persons still hold that the woman had cheated since they were living I London. But her husband’s trust is out of this world. What do you think???

Photo credit: Google Images. All photos used were from Google images and are for illustration.

Content created and supplied by: Rachaeltiti (via Opera News )