What a Man want from a Woman

By Engineerchenny (self meida writer) | 29 days 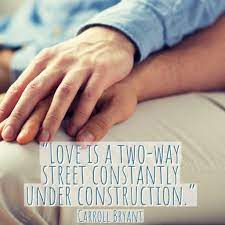 If you're married, I'm sure you know from experience that things don't always go smoothly

The primary emotion according to a modern psychologist is that of RESPECT. I can bring in Qur’an and Sunnah to demonstrate this reality. Allah says in Qur’an 4 vs 34 that Men are in charge of a woman. The one in charge is the person who is shown respect. Also, there is this famous hadith, Muad Ibn Jabal came back from Syria, he entered the masjid and fell down in prostration in front of the Prophet (SAW) and the prophet (SAW) said to him: Yah Muadz, What are u doing? Why are you prostrating to me? Muadz said: I just came back from Syria and I found the people prostrating to their priest out of respect and I felt you deserve the respect more than those priests. The Prophet (SAW) replied to Him saying: Verily Allah has forbidden any human to prostrate to another human but if I were to allow this, I would have told the wife to prostrate to their husband, out of respect and duty she owes to him. The prostration here is just a prostration of respect and it only shows that the wife gives respect to the husband. The question is what does it mean for a wife to respect her husband? I shall be given some specific points:

1.     RESPECT HIS KNOWLEDGE AND JUDGEMENT

It is expected of a wife to respect her husband’s knowledge and judgment, when your husband makes a decision don’t double guess, doubt and don’t try to make him feel he is not intelligent or qualified to do what he is doing. When a man feels his wife does not respect his knowledge, decision or he even feels that his wife is double guessing him then the man becomes irritating, argumentating just because his wife has doubted his sense of power, responsibility and sense of being in charge.

2.     TRUST IS CAPABILITY IN TAKING ON THE PROJETS HE EMBARKED ON

My advice is that wife should not be sarcastic or diminishing of any project her husband feels that he wants to do. As a person I noticed that men are created naturally to have EGOS and has a woman if u do anything to diminish that ego, you have hunt is pride. For you to always pin-point him or always finds his fault, honestly this is very problematic and painful for the delicate male ego.

Also, when you must bring up something negative choose your wording and the tone of your voice with great caution. I am not saying you should not point out mistakes, sometimes you have to but one of the main reason that man complain about their wives nagging is because they feel a woman’s nagging is equivalent to Disrespecting that is why you have to choose your word and manage your tone. When you keep on nagging a man, he feels hatred and it is not going to bring about a positive tone. A woman should know that the reason why her husband is not doing what she asked him to do is because he has other priorities and issues which you don’t know about so what you do is to remind him in a gentle manner with a positive attitude.

3.     LET YOUR HUSBAND MAKE MISTAKES AND LEARN FROM HIS MISTAKES

When a man makes a mistake he won’t be able to get angry at anybody else but when a woman makes a mistake and tells your husband to make such mistakes you are never going to hear the end of it and the wife will surely be blamed for the flaws.

Suppose he made a mistake, guess what? He is never going to make such a mistake ever again because he learned from his mistakes.

Let me quickly ship in something here, there this mistakes that most married couples do today; either the man calling his wife Mother (MOMMI) or the wife calling her husband Father (DADDI). As Muslims, we ought to know that Allah (SWT) has warned us against such acts. Allah Says “None can be their mothers except those who gave birth to them” Qur’an 58 verse 2.

Believe me no man wants to marry a motherly figure; he has his mother for that. He does not want his wife to start lecturing him or daunting him. Sincerely, only his mother is allowed to daunt him, mothers have privileges they don’t extend to their daughters-in-law. So wise up and stop daunting your husband.

5.     NEVER AND EVER IN ANY CIRCUMSTANCES CRACK A JOKE ABOUT YOUR HUSBAND HONOUR OR CAPABILITIES IN PUBLIC

The husband never wants to be made fun of by his wife; if u ridiculed something he attempted in public you are really hunting him. Rather do the opposite. Praise him to the face of his parent’s relatives and friends.

Content created and supplied by: Engineerchenny (via Opera News )

Anywhere You Are, Say This Prayer Against Untimely Death

Are You Confused About Life? Read These Bible Verses For A Solution

Warning: Avoid Cooking Beans With These Two Ingredients, They Destroy The Liver

“I Will Be Back Stronger” Aubameyang Says, As He Reveals The Cause of His Absence

Stop playing politics, I am a banker and I should be left to do my job - Emefiele blows hot

Mothers, Spice Up Your Weekend With Any Of These Delicious Nigerian Dishes