By Kombolo (self meida writer) | 9 days

A popular relationship counselor on Facebook published the story of a lady whose husband asked to leave home because she didn't want to quit her job.

Good day aunty, Please hide my ID and notify me when the news is posted. I'm 37 years old married with 4 kids. I will be celebrating my 16 years of marriage by July. 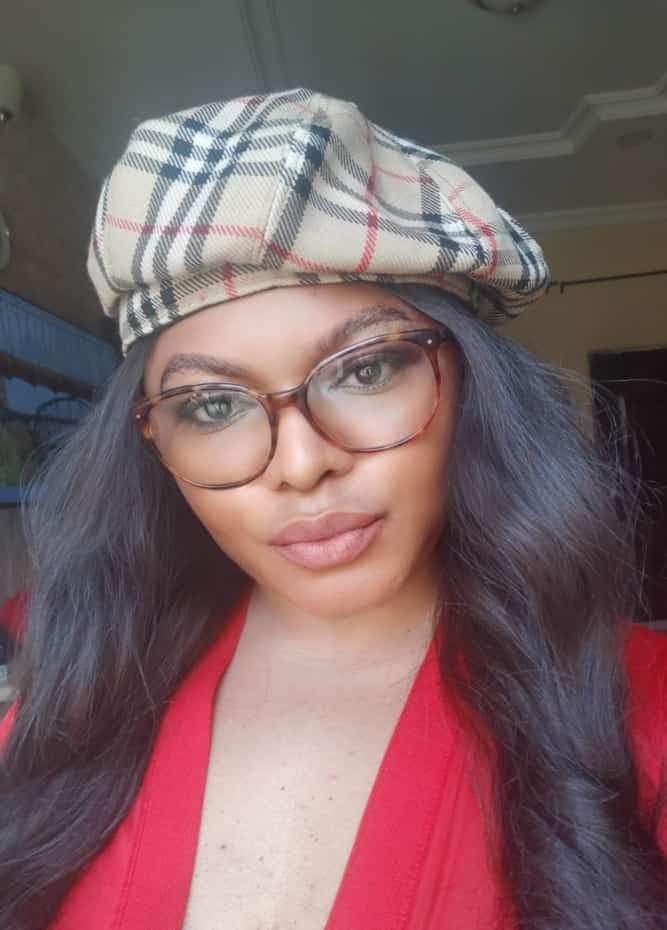 My first 12 years of marriage were so peaceful that people around admired us and talk good about our marriage. Although I tolerated and sacrifice a lot for that peace. My opinion never counted, infant he never carried me along in any of his plans. I complained earlier years of our marriage but with time I got used to that, perhaps it's the age gap between us he's14 years older than me and he always sees me as that little girl he married years back.

He sponsored me in school both College of education and University. Our problem started when I got a state government teaching job which I pleaded with him before he allowed me to apply. My salary was 32k when I started the job. After few months of working, I saved and told him I want to invest in selling something to have another means of income. He never said anything until he saw the beauty products I bought and told me he never approves them. He made me stop selling, ceased my phone and that was the first day he slapped me because I was struggling with him to get my phone back. My mom came, settled it, and told me to sacrifice it for peace to reign. 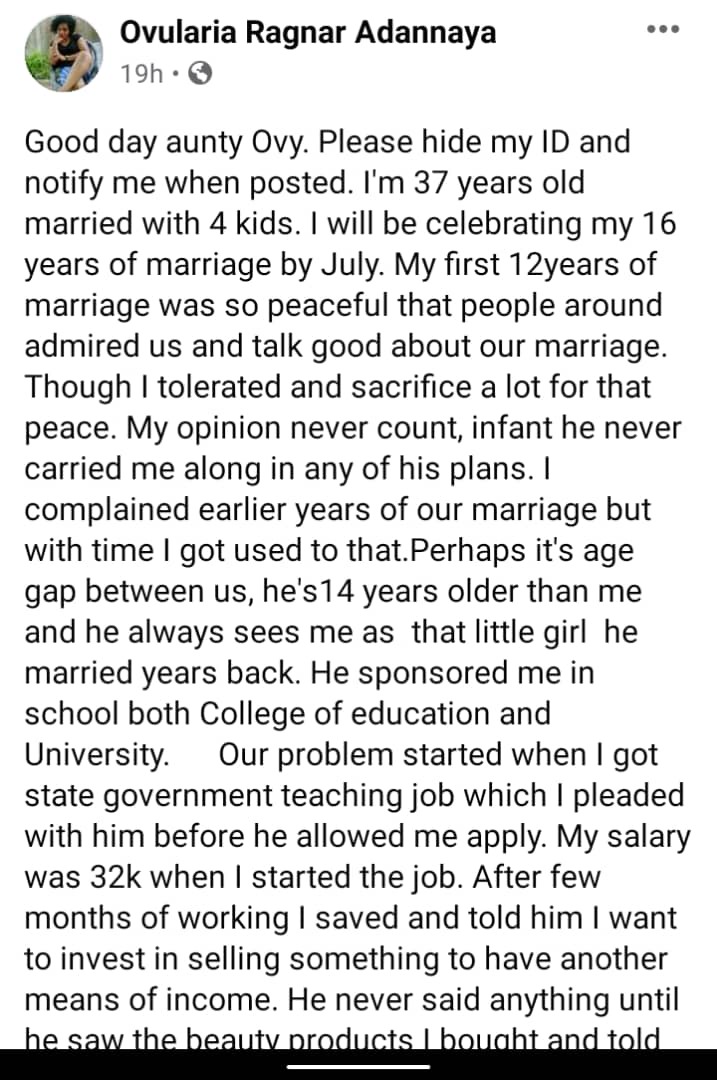 Last two years I seek his permission to learn organic cream since it's a women thing and only women will be patronizing me since he complained about the initial business that involves opposite sex that a man may call me to bring perfume for him in the hotel room and I may gladly go since money is involved. He permitted me to learn organic cream. I spent so much money on learning it and people like my handwork. I started getting referrals and made so many sales that I never expected as a beginner. 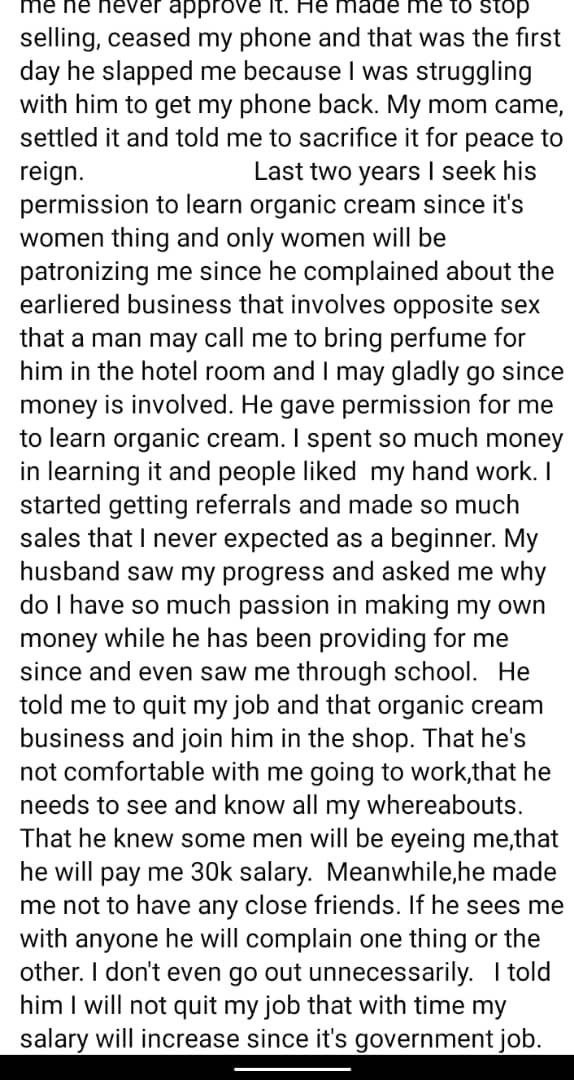 My husband saw my progress and asked me why I have so much passion for making my own money since he has been providing for me and even saw me through school. He told me to quit my job and that organic cream business and join him in the shop because he's not comfortable with me going to work because he needs to see and know all my whereabouts. he thinks some men will be looking at me and as such he will pay me a 30k salary. 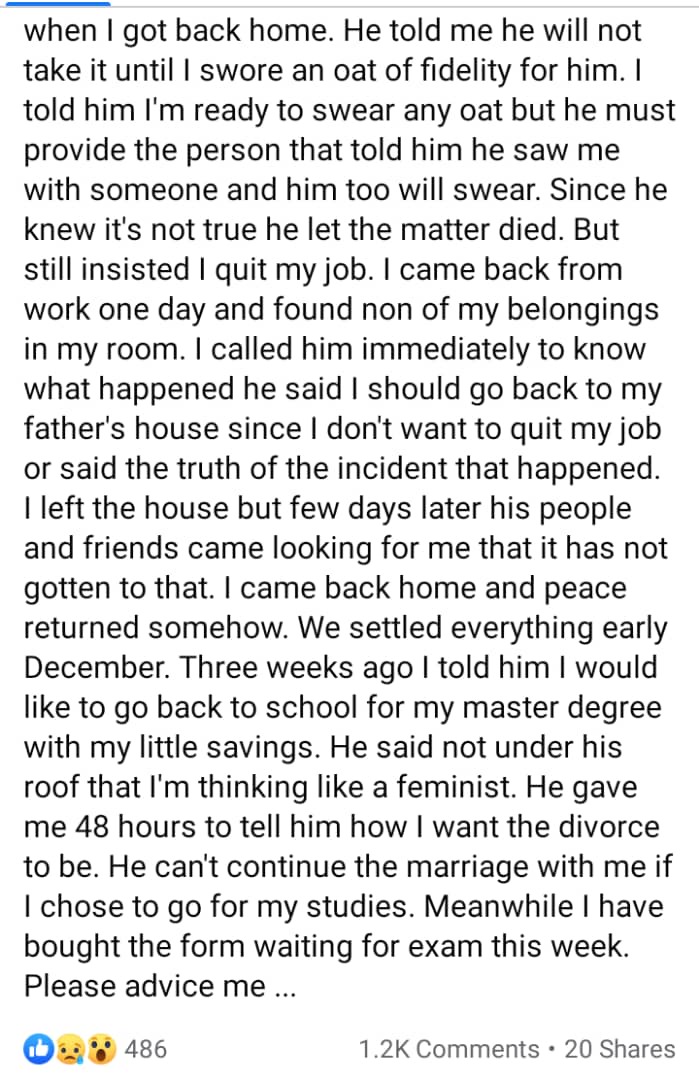 Meanwhile, he made me not have any close friends. If he sees me with anyone he will complain about one thing or the other. I don't even go out unnecessarily.  I told him I will not quit my job that with time my salary will increase since it's a government job. He refused and insisted I must quit my job.

I involved some prominent people like priests, local government chairman, and his relations in the case since I knew his decision is final. None of them supported him and he got angry that I have exposed him to the world even those that respect and valued him are seeing him differently. The chairman told him instead of me quitting the job let him transfer me to work at the local government, I will be less busy and spend some days in the shop. He still refused.

I later pleaded with the chairman to grant me the offer that I prefer that since it will give me more opportunity to further my studies. I started working at the local education authority but he was never happy and we lived like a stranger in the house.

October last year, we had a promotion interview which led me to leave the house around 9 am. He called my mom and lied against me that someone called him he saw me and one man somewhere and when he came to the place the man saw him and ran away. My mom then asked him how about your wife what did you do to her? he said I entered my car and left. My mom called me to confirm what he said but I was inside the office having an interview and my phone was on silent Luckily for me my mom called my aunt that worked the same place as me and she confirmed I was in the office having an interview. I was so mad at him when I got back home, He told me he will not take it until I swore an oath of fidelity for him. I told him I'm ready to swear any oat but he must provide the person that told him he saw me with someone and I will swear. he knew it's not true he allowed the matter slide But still insisted I quit my job. I came back from work one day and found non of my belongings in my room. I called him immediately to know what happened he said I should go back to my father's house since I don't want to quit my job or say the truth about the incident that happened. I left the house but t a few days later his people and friends came looking for me that it has not gotten to that. I came back home and peace returned somehow. We settled everything in early December. Three weeks ago I told him I would like to go back to school for a master's degree with my little savings. He said not under his roof that I'm thinking like a feminist. He gave me 48 hours to tell him how I want the divorce to be. He can't continue the marriage with me if I chose to go for my studies. Meanwhile, I have bought the form waiting for the exam this week. Please advice me

Never Feel You're Too Poor To Help Your Parents, Send Something To Them Even If It's A Biscuit- Reno

Here Are 30 Beautiful And Simple Khaftan Styles For Eid Celebration

Israeli Policemen Attacked The Holy Ground Of Muslims At Masjid Al-Aqsa In Jerusalem.