15 Things You Must Never Do in Public Human beings are very special. Most times the little things we do, turns out to be our habit and if we don't work on them, they may become part of our lives. As we interact daily with friends and family, we must ensure that we always seek to be within our best behaviour. Consciously or unconsciously, most of us are sometimes guilty of one or two of the things I will share with us in this article. The only best way to handle the situation, is to know your strength and area of weakness to enable make amendments.

Here are fifteen things you must never do in public:

1. Never Talk Loudly on the Phone

Either deliberately or not, we must always seek to maintain a low tune while on call in the public places. Some people while making calls in public shout and sometimes reveal top secrets to the public about their lives. It is good to get to a more private place before making that call you intend to make. 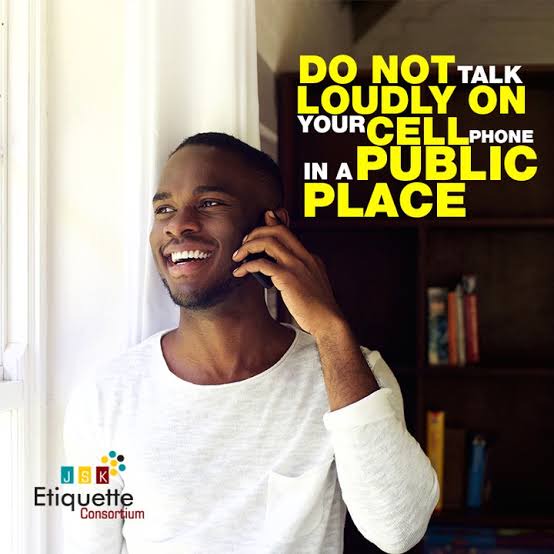 2. Never Groom Yourself in the Public

Some people feel that the public place is where to start adjusting or dressing themselves. It is in etiquette to start applying your make up, or pick your nose in the public. Some even cut their finger nails while in public, all of these should be done in a more private place.

3. Never Eat While Walking on the Road

Many guys are guilty of this. During this period of roasted corn, some persons will buy it and start eating it while walking, until they get to their destination. It is highly uncultured to do eat while walking on the road.

Sometimes we are choked with cough or cartarh, we must look for a more private place to cough out the phlegm rather than stay in a public place and start coughing out loudly. It highly disgusting and irritating to do so.

Some people buy either sachet water or gala, and after finishing the content, they drop it on the floor or throw over the window. The best thing to do is to drop it in a nearby waste bin, and if there is none close by, hold it till you get to a place you can find one.

6. Never Breast Feed your Baby in the Open

Most nursing mothers are guilty of this. Instead of exposing your breast for all to see, hold on a little bit till you get to a more private place before breast feeding your baby.

7. Never Fight on the street

The trend nowadays is to see young people exposing their sensitive parts in the name of fashion. We must avoid dressing naked in public, especially in social media such as Facebook, Twitter and the rest. Don't change your clothes in public, it should be done in private.

9. Never Sing while using your earpiece on

Most people because of the sweetness of the song they are listening to, start singing along despite the earpiece on their ear. The more they sing, the more of key they go and it makes you look awkward.

10. Never Talk to Yourself

As humans, we maybe bothered with one challenge or the other, the best thing to do is to internalize your thoughts while walking on the road rather than talking to yourself.

This one goes mostly to the guys. It is uncultured to start peeing in places that is crowded and expect people not to stare at you. You should have self control until you get to a more private place or a bathroom.

In as much as it is impossible not to fart, it is also impolite to fart in public. Instead you can excuse yourself and look for a more private place to pass out the gas. If it happens by mistake, you should apologize.

Some people make it a habit to stare at people in public. It is rude and uncultured to do so. Even if we stare, you must do so with utmost respect and maturity. 14. Never Spit While in public

It is a dirty and disgusting attitude to start spitting all over the place in public. Some people keep spitting uncontrollably which make it becomes bad and uncultured. It is amazing to see the way some people laugh in public. We must learn to be at our good behavior while interacting and laughing in public.