By Supertee (self meida writer) | 14 days 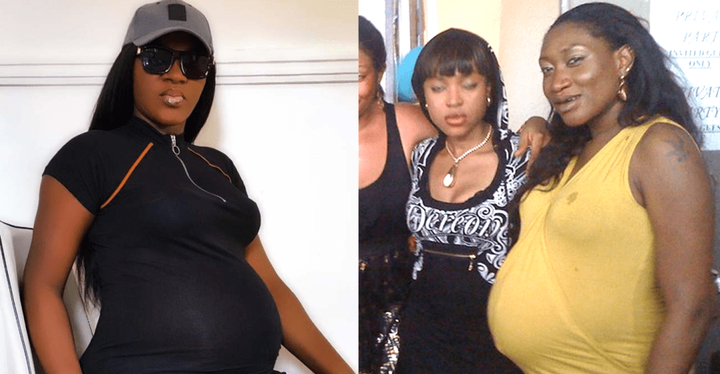 Still, as popular as celebrities are, there have been a couple of them who have been successfully able to hide pregnancies and eventually surprise their fans and viewers with the big news at the appropriate time.

Today we’ll be counting down 7 Nigerian Celebrities Who Had Very Surprising Pregnancy Announcements. Are you ready to see the list? Then let’s go!

Nigerian actress Chacha Eke is no stranger to the spotlight or to media coverage. She was again in the spotlight and across Nigerian forums when October of last year, she surprisingly announced that she was pregnant amidst a time when she was claiming to be having domestic issues at home. She blamed her pregnancy for her bipolar and left fans everywhere surprised with the news.

On Saturday, April 24, 2021, she once again surprised fans with the announcement that she has given birth to her fourth child, Diamond Kandilichukwu Faani.

Another person that surprised the entirety of Nigeria with her news was beloved actress, Adesua Etomi. After three years of marriage, she announced on her birthday this year that she had not only been pregnant, but had given birth to her baby boy, Zaiah.

The surprise announcement on her birthday came complete with a photoshoot and a music video days later to match.

Nobody does surprise pregnancies the way Di’Ja does. At this point, Di’Ja could even be pregnant again and nobody will know because she is renowned for being very private about her personal life and has been for not one, not two, but three children. The singer in December of 2019 announced that she had not only been pregnant but had given birth to a third child. A very big surprise to her fans.

Nigerian singer Emma Nyra surprised fans when news broke that she was pregnant. The news hit a lot of fans with even more surprise because at the time of Emma’s announcement, she was still unmarried. Still, Emma went ahead with the pregnancy and months later came back to announce that she had given birth to a set of beautiful twin children.

It was big news and big controversy in 2011 when news that singer Omawumi had become pregnant. At the time of the news, Omawumi was still single and as a result got an onslaught of insults and names thrown at her for having a baby out of wedlock. Still, the incredible singer persevered, had her baby, and later went on to marry the father of her baby years later – doing it all on her own timeline.

Nigerian singer Simi revealed her pregnancy in still by far one of the most epic ways in Nigerian history – through her music video. It was done so beautifully and so elegantly and the song Duduke became a love letter from mothers to children everywhere because of the announcement. It was very surprising and very beautiful.

Fans were left in shock when in 2010, a picture of a heavily pregnant Oge Okoye hit the internet. Prior to this, fans had not known the actress was pregnant and so the picture was met with incredible shock by everybody online. Months after the picture surfaced, she again resurfaced looking like she was never pregnant – but she was, and she had given birth. More surprisingly to many people who didn’t know – it was even the first time she had done this. The child in the picture above was actually her second, and she already had a 3 year old son at the time of her birth.

Wherever You Are This Sunday Afternoon, Declare These Prayers For Total Breakthrough And Testimonies

Reason why some ladies have hairs on their body

"If you have money, why can't you help your brother, stop living a fake life"- Oye blasts Bobrisky

If you really want to forget your sorrow, view this funny pictures

Checkout stylish ways you can rock your boots with skirts, dresses and Jeans