The Mother-Daughter Duo behind the World's most Famous Personality Test

By Olufhemyy (self meida writer) | 12 days

Isabel and her mother Kathrine weren't the first to dream up a personality test. The first was called the Army Alpha, which was created in 1917. Designed to make recruiting for the armed forces easier, the program was born from the idea that a simple assessment could determine what a person was like and what role in the workforce best suited them.

Katharine Cook Briggs and her daughter, Isabel Briggs Myers, couldn't resist the urge to categorize people. Assessing personalities, they thought, had so many useful applications, but no test quite accomplished the feat in a way they thought was most practical. That's what led them to create a metric that millions of people around the world would grow to use daily!

That metric would eventually be used to determine who a person was and what job they were best suited for. What influenced the test's creation is clear: Just consider the kind of family Katharine Cook Briggs comes from. Born on January 3, 1875, in Ingham County, Michigan. Her family was peculiar, especially for the times.

The Briggs's believed firmly in education. Katharine's father, Albert Cook (below) was a well-known entomologist and zoologist, and a professor at Michigan State University. Her mother had attended Oberlin College, but one big difference between mom and dad had a major influence on Katharine.

While Katharine's dad was a scientist, her mother was, by contrast, "an extraordinarily devout woman," according to professor Merve Emre at Oxford University. An expert on the Katharine Cook Briggs and Isabel Briggs Myers duo, Dr. Emre explained these equal parts of scientific and religious influence had a big effect on their eventual creation.

Dr. Emre believed that because of the stark difference between her parents' two livelihoods, Katharine "felt very torn between her father's scientific understanding of the species and her mother's commitment to saving people's souls." Katharine later tried to wrap it all up in her life's research.

Like her parents, Katharine graduated from college. She went to Michigan Agricultural College, now known as Michigan State University, starting her studies at age 14! It makes sense that someone so driven would start an international movement.

Katharine graduated and married an impressionable man called Lyman James Briggs (below). He was a physicist and the director of the Bureau of Standards, known today as the National Institute of Standards and Technology. The two badly wanted to have a daughter, but their many attempts resulted in miscarriages. Finally, they had Isabel in 1897.

For Katharine, the initial inspiration for the now-famous test actually came from raising her first and only daughter. Wanting to understand the best ways to raise Isabel, she and Lyman studied behaviors and parenting strategies. They homeschooled Isabel and stressed the importance of reading and writing. 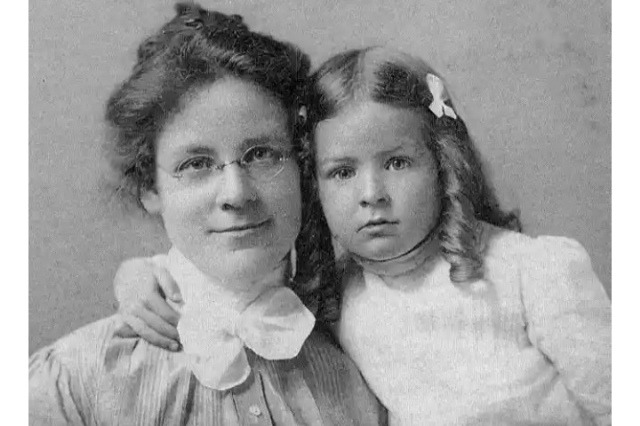 While Lyman Briggs worked, Katharine stayed at home, acting as a mother, housewife, and teacher. Without an active career, she grew restless and looked for something to apply her prodigious mind to. That's why she started studying politicians, which led her to examining personality types.

With a mental library of knowledge that covered political personas and parenting strategies, Katharine sought to advance her research. She wanted to know what made her daughter tick, but she needed to conduct more research to make any conclusions. She turned to theories of children's development that were popular at the time.

In her research, Katharine discovered Psychological Types, a book by psychologist Dr. Carl Jung, who was conducting studies of his own across the pond. She reached out with questions and began "to type everyone around her using Jung's categories of introversion and extroversion, sensing and intuition, thinking and feeling," according to Dr. Emre.

Katharine's research extended for years, and eventually, as an adult, Isabel joined her. They concluded that their theories had the potential to ensure a child's health and happiness in the long-term, and by 1917, after putting together all of their readings, insights, and figures, the personality test was done. They called it the Myers-Briggs Type Indicator (MBTI).

Meditative. Spontaneous. Executive. Sociable. These were the "types" of people Katharine concluded existed in the world. Later on, they developed into the official designations of Ixxx, ExxP, ExTJ, and ExFJ, where the X differentiates one variation from another. Below, you can see the specific types they alleged.

It wasn't until Isabel was about to get married in 1918 that her mother really applied her theories on personality types. Isabel fell in love with a man named Clarence “Chief” Myers, but Katharine didn't know him well. But through her own invention, she would soon try to "categorize" him.

Armed with various fields and focal points of knowledge, the mother-daughter duo tackled the upsurge of labor categories following the First World War. Institutions faced the big challenge of sorting out all the different personalities, and that's where Isabel and Katharine started their work.

What makes the MBTI so remarkable is that it doesn't care whether someone is right or wrong for the given career path they're trying for. Instead, according to Dr. Emre, the exam told people "that they weren't right for a particular type of job — that something else might fit them better."

According to Dr. Emre, Isabel found this model to be a more "compelling and persuasive way to convince people to do work for you because they believe they are made to do the work that you are asking them to do — so they will bind themselves to it freely and gladly."

It didn't take much shopping around for this power duo to take on their first client, Office of Strategic Services (OSS), which preceded the CIA. The intelligence organization bought the test to try it out on their own recruits. Since then, the test has taken on a life of its own in more contexts than one could count.

Beyond steering people into labor, there has been a great effort to cover up much of Katharine and Isabel's private life. When Dr. Emre dug in deeper to their history, she quickly realized why. Both mother and daughter had published several minimally successful novels all with the same themes: viciously racist plots and eugenics

Isabel's 1934 novel Give Me Death follows a mysterious chain suicides in one Southern family. Detectives soon realize the reason behind the deaths is because they believe "there is in [our] veins a strain of Negro blood." The detectives eventually agree that it is "better for [the family] to be dead" than for them to be alive and reproducing with white people.

But years of burying the mother-daughter duos beliefs paid off for their ultimate creation. Prior to understanding personalities, if you were, say, a middle-aged, white, married woman who had been suffering from severe abdominal pain and emotional distress, a doctor would likely have a simple diagnosis.

Hysteria. It’s slowly falling out of use nowadays, but in years past, having a uterus pretty much meant any illness you had could be chalked up to hysteria...whether that was the problem or not. However, as we started to better understand psychology, that diagnosis fell out of favor.

NLC declares warning strike after over 4,000 workers were sacked by El-Rufai

Covid-19 Variants in Nigeria: Here are two measures to employ to forestall a total lockdown

Checkout These Easy Ways To Style Your Hair