By 1stladyblog (self media writer) | 1 month ago

Relationships mean different things to different people and as such many individuals go into it for the material gain at that moment and not necessarily the fact that they're in love and when they're done then they practically leave for another. 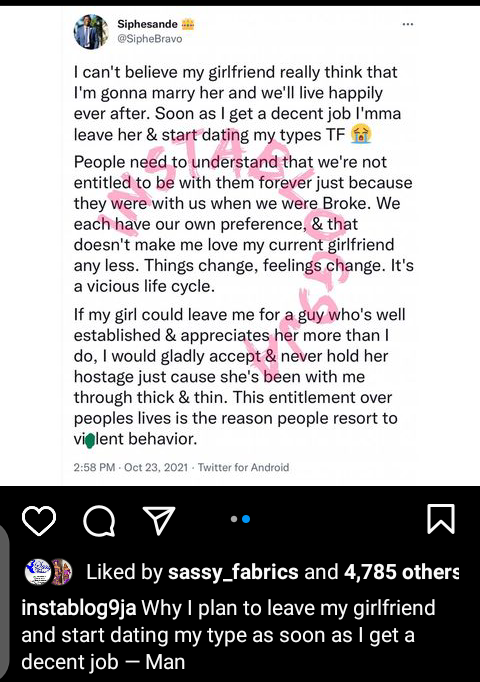 What I will be sharing with you in today's article is about what an unidentified Nigerian man revealed he is going to do to his girlfriend he is currently dating after he gets a decent job. According to him, he noted that he can't begin to imagine that the woman in his life now is expecting that he is going to settle with her in marriage and live forever after.

Furthermore, he stated that the moment he can grab a very well-paying job, he is going to dump her and then go for his kind of lady. Moreso, he said that people would have to understand the fact that they as men are not obligated to stick with the ladies forever because they stood by them (men) when the times were down.

In addition, he stated that they have their preferences of the type of woman they desire however that wouldn't make him cease from loving his girlfriend but he wants people to know that times change and likewise his feelings which notes it part of the circle of life.

Also, he said that if she should leave him and go for someone who already established and if the guy likes her more than the way he does, then he will be glad to accept her decision and will never hold back over the fact that she has been there for him when he had nothing.

In conclusion, he said that this kind of ownership over the lives of people in a relationship makes an individual have a violent attitude at the end of the day. 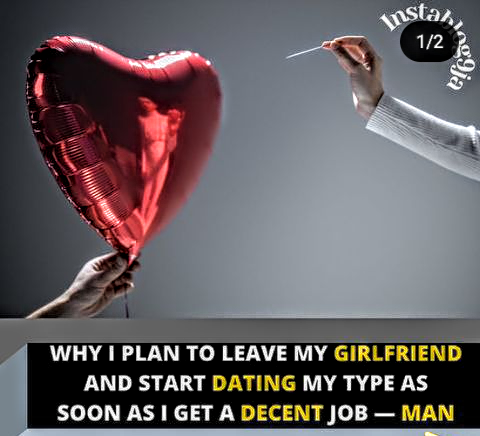 In my opinion, the man is saying it implying that the lady isn't the one he will love to spend the rest of his life with but he is with her for a reason best known to him after which he will

Guys, what is your opinion on this? Is this fair or not. Let's hear you below the comments section. Thanks for reading and following.