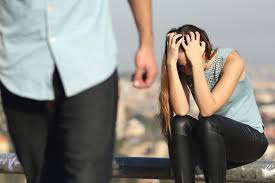 The title sounds a little harsh. By 'a fool' I mean a woman who sticks around too long in a relationship that is deteriorating progressively, a relationship which becomes increasingly unhappy most of the time. And I'd be the first to admit that I've been there, done that and sported the T-shirt for way too long, until said T-shirt was falling apart and I finally got it: banging your head against a brick wall is not a bright long-term strategy - or, indeed, a short-term one.

We become fixated on our partner's potential - and of course he has potential, whatever we mean by that word. If he hadn't had potential why on earth would we have bothered in the first place? Few of us have a robust enough sense of self, or are that crazy that we choose to have a relationship with someone we feel has less to recommend him than the average roach.

Still, despite the unhappiness, there are flashes of light, moments when you catch sight of the man you fell in love with. Those moments, of course, 'make up' for the neglect, the criticisms, the carelessness with your feelings, the abuse...

No, of course they don't. But once you start down the slippery path of hoping, excusing and believing, you lose sight of the simple truth that a relationship should bring you joy. If your relationship is generating misery, if the partner you are with leaves you feeling sad, desperate or rejected, then it is a bad relationship.

Nature, we are often told, abhors a vacuum. Hanging on by your teeth and nails to a bad relationship leaves no space for a good relationship to unfold elsewhere in your life.

None of this is news to me nor, probably, is it news to you. Still, it was brought home to me very poignantly this week in the course of a conversation with a young friend.

This friend is in a relationship with a man who is not abusive at this point; the relationship is still quite new. However, he is damaged, fragmented and inconsistent. He can be wonderful, and he can be absent so that, even when he is with her, he is simply not there.

How bad is this really? Suffice it to say that she has begun obsessing about him, his feelings for her, whether the relationship has a future. She can feel profoundly unhappy about him for days and then, when he changes again and shows his potential, her spirits rise.

How familiar does that sound?

There are days when she thinks the relationship is hardly worth the misery and days when she feels so intimately connected that she is not prepared to let go.

This week this friend reached the stage of deciding that she would end the relationship, albeit in a few weeks rather than days. Then she saw him again and he was at the top of his game; charming, communicative, fun, loving.

She decided to go on with it. She's not prepared to leave a relationship with so much potential yet.

I expressed my concern and she replied: "I've listened to so many other women who have been through it, I won't let it happen to me. If I have to get out, I will."

Little does she know how difficult it is to get out when you let yourself be sucked ever deeper into a relationship by the alternating joys and misery.

My reply, I'll admit, was less than gracious. What I heard was a young, naïve woman saying: "I'll tread water and keep treading water as I am swept further out to sea and if I need to, then I'll swim back to shore." What I said to her was this:

The women she had listened to were not born fools. They, we, were feisty, intelligent, loving, naively trusting women. We became fools inch by inch. We lost our vision, our sense of self, our clarity about what we would and would not tolerate inch by inch. That is how it goes.

Sure, there are some women who will settle for table scraps from Day 1, but that is simply not true of a great number of women who end up being abused. First we fall in love and then we honour that love by compromising.

Sometimes the compromises are small at the start. Sometimes they are not so small. Either way, when you put them in the balance and set love on the other scale, they seem small.

We are foolishly, perhaps insanely, drawn to the myth, or miracle of the happy ending. The worse the lead-up has been, the more miraculous, the more earned that happy ending would be. Yes, we would love our own personal miracle. Who wouldn't?

But here's the thing: there is room in everybody's life for a lot of miracles. The miracle of a bad relationship turning into a good one is probably the least likely one to materialize.

Persistence, it is often said, is a virtue. Persistence leads people to great results. I would not argue with that. But persistence means keeping a goal in mind and using as many different strategies as necessary to achieve that goal. It does not mean doing exactly the same thing every time in the hope of getting a different result. Yet that is what we do in bad relationships. We keep on hammering away with the same blunt tools and are amazed when we fail to create a thing of beauty and value.

That is when women become fools. We become fools when we progressively divest ourselves of the resources of our energy, our strength, our sense of self, our independence. We all know what happens then.