According to Akinwumi Ogundiran (2020), traditionally, ancient Yoruba people were said to be monogamous although polygamy was not forbidden – only wealthy men were said to be polygamous, otherwise having one wife was necessary. 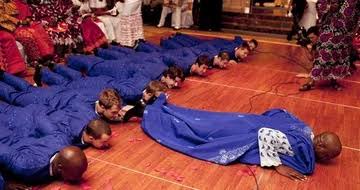 However, I believe that in recent times, the marriage laws and customs in Yoruba land have undergone many changes due to civilization and the widely accepted Christianity and Islam. But all things being equal and normal, there are three stages to be observed:

The first stage was for the elder female members of the family to look out for a wife for their male relative. It is said that young men get married as soon as they are of age to support the family, and girls are often marked out from childhood for a particular young man even with or without her knowledge.

They will first check the girl's family background (medical, financial and criminal history), if satisfied, they will then approach her parent, and then consent will be established. If the girl likes the young man in question, then stage 2 is unlocked, though it is rare for a girl to refuse her parents' choice.

The second stage is called "betrothal" where both families will make the consent formal, it is usually held at night but only after which the oracle had been consulted, the young man will present ogójì òbí (40 kola nuts), cowries and ẹmu (palm wine) for refreshment, the kola nuts will be split and everyone present must have a bite of it to signify that they are witness to the betrothal.

From that day on, the bride-to-be must not meet the groom-to-be or any of his family without covering her face. In addition to this, the groom-to-be family will also present some atairẹ (alligator pepper), orógbó (bitter kola) and more kola nuts to the bride-to-be family: this is said to signify the future relationship between both families. This was usually followed by "Ebo Ìyàwó" (Bride sacrifice), an offering of sacrifices to seek blessings from the gods (the couple-to-be will carry it themselves).

Lastly, is the Ìgbéyàwó, which is usually held anytime of the year except during the fast and the Egúngún festival; the bride will be clothed in her best attire, covered with a white veil, she will journey from her parents home to that of her fiancee in the company of her friends with bards behind her.

She will be met at the entrance gate of the bridegroom's compound by his female relatives who will wash her feet and literally lift her into the house (her feet will not touch the soil until she is inside) hence, the term "Gbé Ìyàwó" (lift or carry the bride), she is then taken to the bathroom where she is washed afresh, rubbed and perfumed and then dressed.

She now becomes the inmate member of that family, and the marriage is sealed.