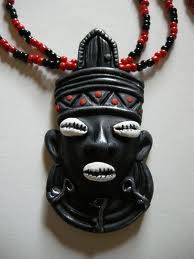 1.Ijaya (To Fear). A charm used to scare an opponent or an antagonist in a workplace, school, etc., or there's someone you want to take advantage of that you want him/her to remain silent while you're expressing your opinion and exploring all the good things for your benefit. Ijaya will do everything. It causes unreasonably overwhelming fear to both humans and animals.

2.Eru (Fear) When you put someone on "Eru," they'll be afraid of you for life while they're in your vicinity.

3.Afose (Speaking and coming to pass, or Speaking and happening) is a pretty advanced form of Ase. It is usually prepared with black soap and placed inside an animal's horn e.g. Cow's, Antelope's, Cow's e.t.c Whenever Afose is spoken to occurs immediately or later in the future depending on the charm potency or the nature of the issue that Afose addresses. Yoruba ancestors possessed some Afose to address elements of nature such as rain, fire, outbreak e.t.c and on the negative size to curse(Epe) I had one that I use to stop a car from starting also saw one that is used to dry up a very big tree in three days.With that Afose you may put a curse on somone or any Object be it animated or Non, the tree has been cursed.

4.Gbetugbetu This is something of a charm to hypnotize. The person under the spell just doesn't know what he's doing. It is used to persuade people to do almost impossible things. They wouldn't or would n't. There are also some simple formulas, but they vary however in strength as well. It is somewhat difficult to prepare. The powerful ones I know have the clothes that a man hanged himself with as part of its ingredients. I should define an incident that was treated by the use of Gbetugbetu to demonstrate its force. A friend once called him into his room with a pretty but stubborn woman. (She would usually have shunned him straight away.) When she got inside, he told her to strip, which she did immediately, but he didn't touch. The girl came to her senses 3 days later, questioned my friend and an argument broke out. It was resolved but the girl from then on evaded my friend after that incident. Story morality — You 're not playing such jokes because you have the power. Our forefathers used it when a group of robbers threatened them; they told them to fight (each other) or turn over their arms

5.Olugbohun: The "tone picker." It's believed to be a strong spirit picking up what's said and making it happen, if not very quickly immediately. (Even though you accidentally curse your kids out of frustration.) Now it's not a genius who would drop stuff in front of you, like food, wine, and a flying carpet. It will, therefore, establish a circumstance that will allow your request to be met. It is not held in the house but the bush far away and is only consulted once in a while.

7.Aluwo (Charm of making someone fall after the hit)