By Vhikto (self media writer) | 2 years ago

On January 1, The Cable named Stella Adadevoh as Nigerian of the decade. One may begin to wonder who Stella Adadevoh is and why she deserves the award. I’d just point it out first that Ebola was contained in Nigeria because of her efforts. She isn’t the only one who lost her life during the Ebola saga, but her efforts will forever be appreciated. 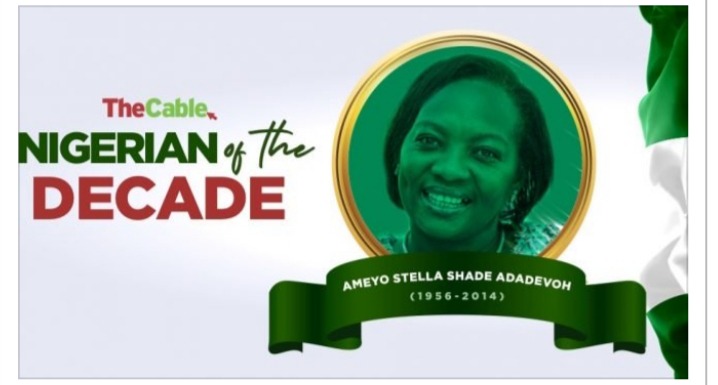 Adadevoh correctly diagnosed Patrick Sawyer as the first case of Ebola in Nigeria. Regardless of the fact that Sawyer insisted he had malaria and wanted to be discharged. Adadevoh ensured that he was at the hospital, so as to ensure that the virus doesn’t spread.

It is worthy of note that Sawyer attended a sister’s burial before coming to Nigeria. Sawyer’s sister was reported to have died from Ebola. There were speculations that Sawyer planned to travel to the US from Nigeria for further treatment as a flight to the US from Liberia was banned at the time.

Adadevoh’s insistence that Sawyer should stay in the hospital was opposed by some of her colleagues and of course by some top officials who insisted that Sawyer be released so that he could attend a diplomatic event in Calabar.

Considering how fast Ebola spreads, you can imagine how many lives would have been at risk if Adadevoh hadn’t insisted that Sawyer remained at the hospital. Her efforts helped to reduce the spread of Ebola in Nigeria and the world at large.

These are things you should know about Dr Stella Adadevoh.

1. Ameyo as she was fondly called Ameyo, was born Stella Ameyo Adadevoh to Babatunde Kwaku Adadevoh, a renowned physician, distinguished scientist, lecturer, author, and former vice-chancellor of the University of Lagos, on October 27, 1956.

3. Adadevoh got married to Afolabi Emmanuel Cardoso on April 26, 1986, and they both have a son, Bankole Cardoso.

4. Adadevoh had her primary education at Corona School, Yaba, Lagos, before going on to Queen’s School, Ibadan, for her secondary education. Then proceeded to the University of Lagos, where she studied medicine and surgery while her father was vice-chancellor.

5. She started her medical career at Lagos University Teaching Hospital (LUTH), where she served for two years.

6. She completed her fellowship in endocrinology at Hammersmith Hospital in the UK. But refused to stay back like most of her peers.

7. Adadevoh came back to Nigerian and helped build First Consultants Medical Center in Lagos, where she worked for 21 years.

8. In 2012, Adadevoh was the first to diagnose the deadly H1N1 (swine flu) spread in Lagos and alerted the ministry of health in time, thereby halting the spread of the disease in Nigeria.

9. Until her death, she served as lead consultant physician and endocrinologist at the First Consultants Medical Center, Lagos.

10. A non-profit, Dr Ameyo Adadevoh Health Trust (DRASA) was created in her honour. The movie, “93 Days” is dedicated to her.

11. On her 62nd post humourous birthday, a Google doodle was made to celebrate her.

Content created and supplied by: Vhikto (via Opera News )