Another Influential Man Dead In US Today

The 42nd vice president of the United States, Walter Mondale, has been confirmed dead. 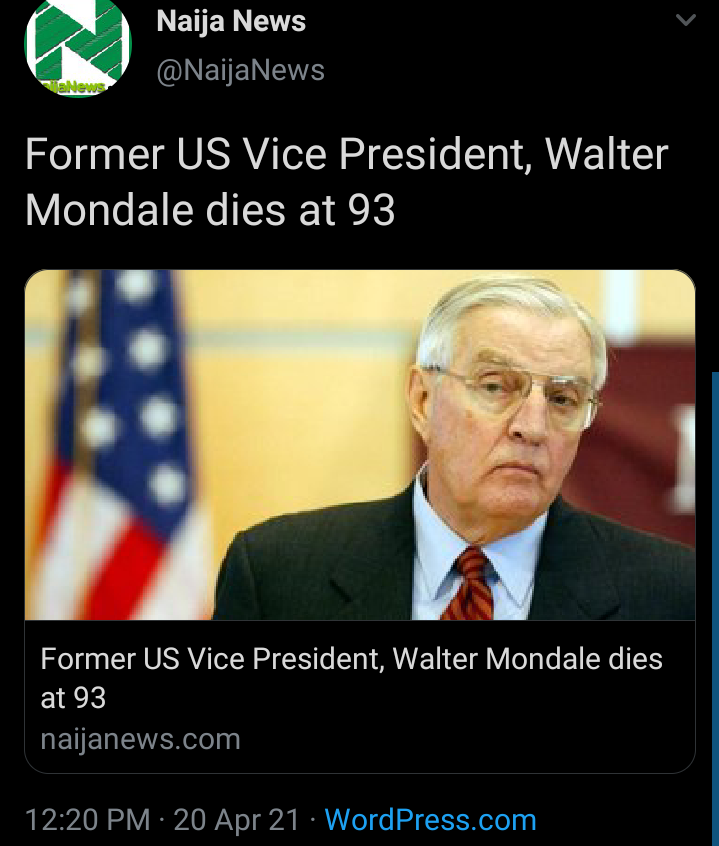 Naija News understands that the diplomat was confirmed dead in a statement released on Tuesday morning by his family.

However, till this time of filing the report, no cause has been revealed for the death of the former senator, ambassador and Minnesota attorney general. Naija News understands that Mondale died at the age of 93.

is with profound sadness that we share news that our beloved dad passed away today in Minneapolis, Minnesota," his family said in a statement on Monday, April 19," a statement from the deceased's family read.

Also confirming his death, US's 39th president, Jimmy Carter wrote; "Today I mourn the passing of my dear friend Walter Mondale, who I consider the best vice president in our country's history," Carter said in a statement, extending his condolences to his former number two's family.

"He was an invaluable partner and an able servant of the people of Minnesota, the United States and the world."

The President of Chad, Idris Derby is dead.

The statement read by the national army of Chad on national radio revealed that President Deby who was newly re-elected has died of wounds he received while commanding his army in battles against rebels in the north. 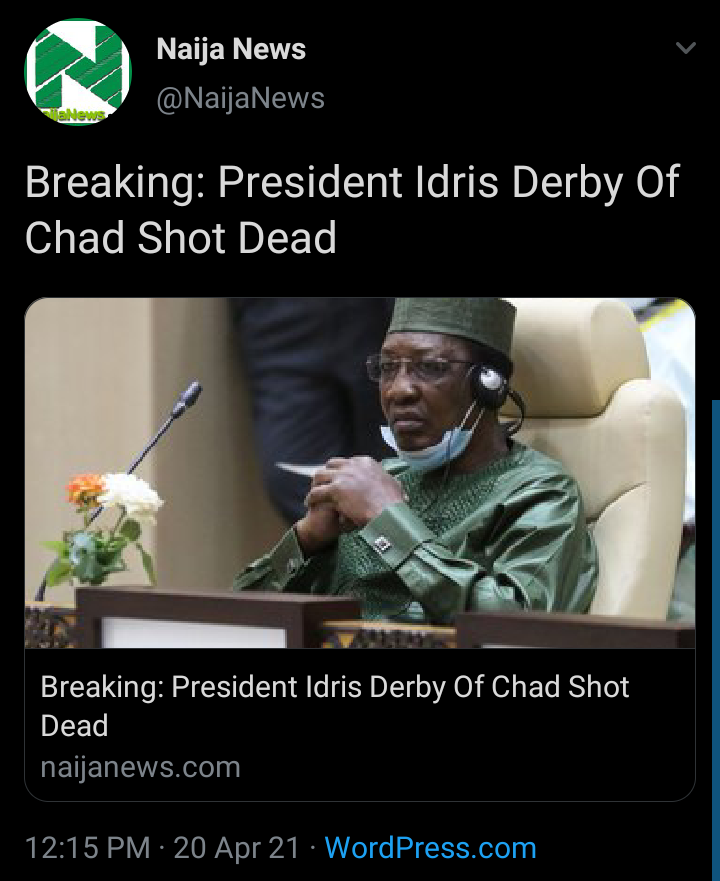 Recall that Chad President had earlier won his sixth term in office in the latest provisional results on Monday by 79.3%.

According to the army spokesperson, Général Azem Bemrandoua Agouna, the military had been pushed back by a column of insurgents who were advancing on the capital, N'Djamena.

Déby was expected to give a victory speech after receiving the provisional results, but opted instead to visit Chadian soldiers on the front lines, said his campaign director Mahamat Zen Bada.

According to one report, the soldiers were attacked by militants from the Front pour l'Alternance et la Concorde au Tchad (FACT) (Front for Change and Concord in Chad) who had arrived from their base in Libya and had entered Chadian soil on 11 April.

While residents are yet to recover from the tanker explosion that rocked Oshigbudu in Agatu Local Government of Benue State, another explosion has been reported on Tuesday morning. 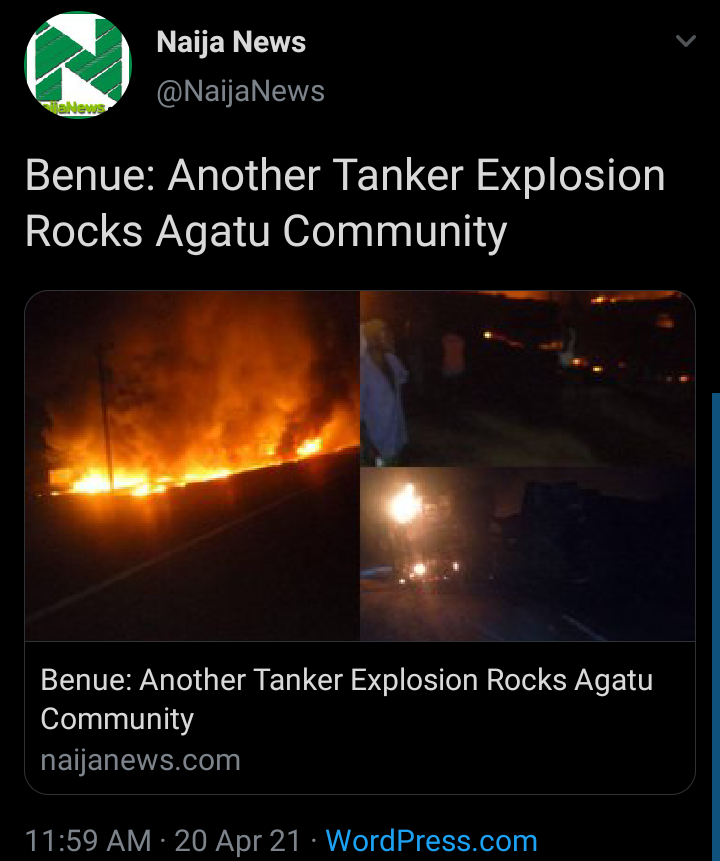 Reports reaching Naija News at this time confirmed that a reoccurrence of the explosion was recorded in the community at about 3 am on today.

Otache Gabriel, a resident of the community, confirmed the disturbing development a few hours ago on his Facebook page.

He wrote: "Another fire outbreak in my community again. After first tanker explosion on Sunday, another one today around 3am this morning; houses are burning.

"God have mercy on us oo. Benue state is turning to another thing. God, two tanker explosions in one community.

The Police Command in Delta says it has apprehended two suspected kidnappers and rescued four victims in two separate operations.

The acting Police Public Relations Officer (PPRO), of the Command, DSP Edafe Bright, made this known in a statement, on Tuesday in Warri.

Bright said two of the victims, Solomon Otomierewo and Rukewe Urhiephroune, were kidnapped on April 19, 2021.

The police spokesman said Otomoierewo and Urhiephroune, were returning home when they were abducted by four suspected kidnappers in Oghara, Ethiope West Local Government Area (LGA) of the state.

Governor of Kaduna State, Mallam Nasir El-Rufai, on Tuesday, said the only way to deal with bandits and make schools safe is to eliminate all the bandits. 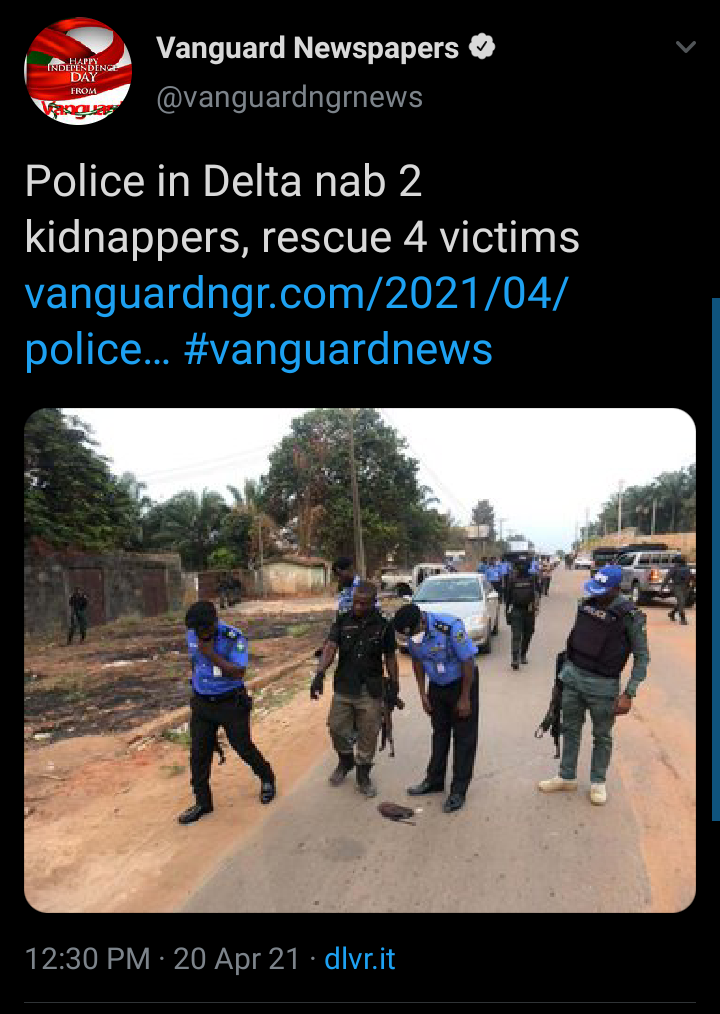 El-Rufai, in the early days of his governorship of Kaduna, was reported to have given monetary compensation to some Fulani in and out of Nigeria for their rustled cattle.

At a panel discussion at the ongoing Financing Safe Schools in Nigeria conference at the Transcorp Hilton Hotel, Abuja said the Air Force should just shell the forests where bandits are hiding. 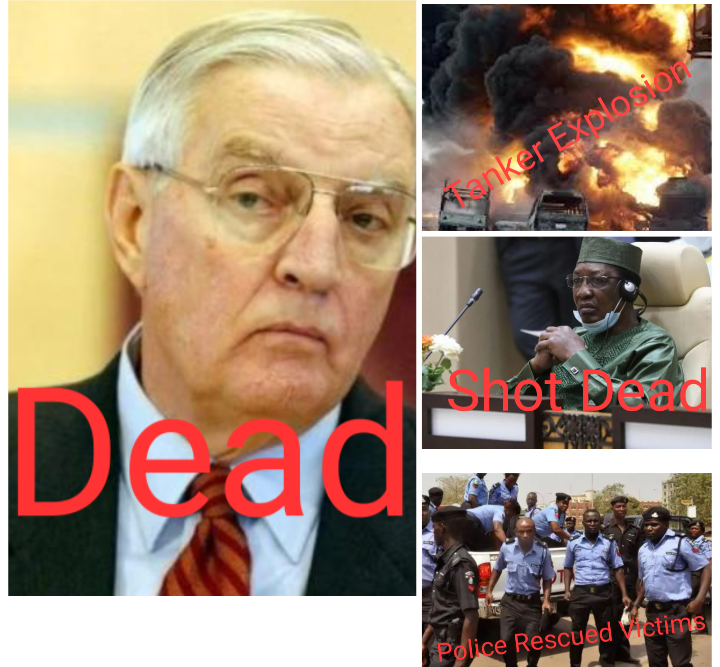 Ladies, Get Your Husbands Attention With These Ankara Outfits

Lady Reported Missing Finally Reunites With Her Family, Says She Went To Her Boyfriend To Cool Off