It seems the menace of cultism and increasing number of cultists will not end soon as seventeen members of the dreaded cult group, Black Axe, also known as Aiye Confraternity, have been arrested by operatives of the Delta State Police Command while they were holding initiation ceremony inside a bush in the state, the command announced on Tuesday, September 28.

The 17 young men were arrested late in the night around 1:45 a.m. by operatives of the Delta State Anti Cult Unit (SACU) while they were holding initiation ceremony in the bush at Onicha-Ugbo community in Aniocha North Local Government Area of the state.

It was gathered that when the operatives stormed the venue of the initiation late into the night, they were able to foil the initiation ceremony and also arrested 17 young men while others escaped into the bush.

It was also gathered that at the point of their arrest, one locally-made revolver pistol with four live and three expended 9mm bullets were recovered from two of the cultists. Also, some substances suspected to be Indian hemp, one Honda Accord car, five motorcycles and a bag containing clothes were recovered from the scene of the initiation.

A statement issued by the state police command through its Public Relations Officer, Bright Edafe, added that some of the young men had confessed to belonging to the cult group during interrogation while more investigations into their activities are ongoing.

The statement also added that a manhunt had been launched for the fleeing members of the cult group. 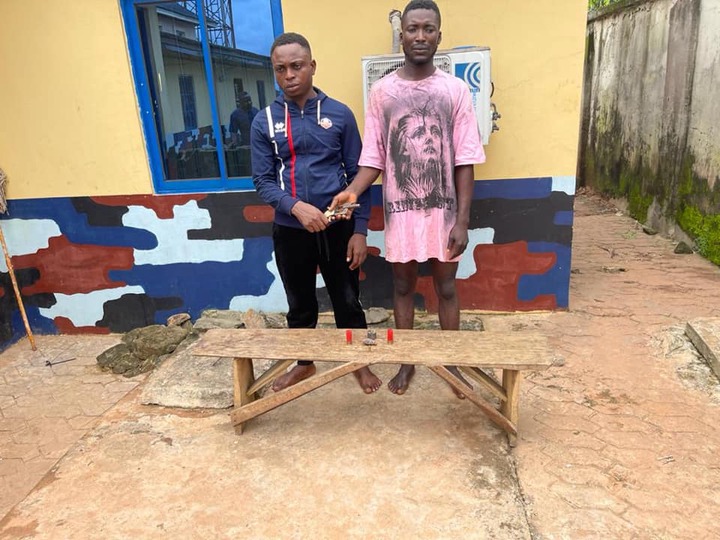 Two of the cultists found with a pistol and bullets

Part of the statement, posted on the Facebook wall of the command, read: "Policemen acted on intelligence gathered that members of Aiye confraternity, also known as Black Axe, were carrying out an initiation ceremony in the bush at Onicha-Ugbo community in Aniocha North Local Government Area.

"The Commander, Delta State Anti Cult Unit (SACU), detailed operatives who stormed the venue of the initiation late in the night and they were able to foil the initiation process and also arrested 17 young men while others escaped into the bush.