By SPORTLIVE (self media writer) | 11 months ago 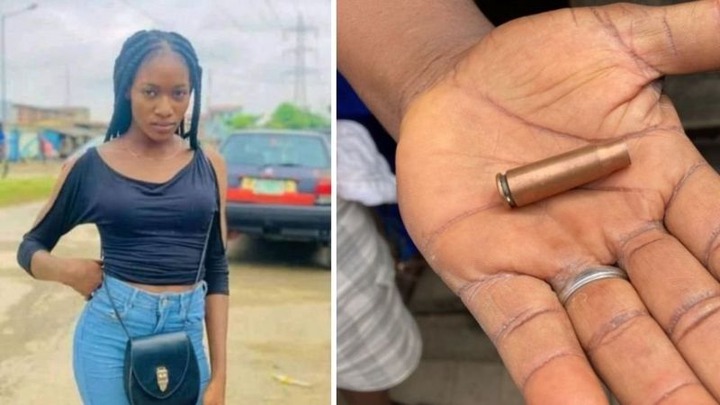 18-year-old Monsurat Ojuade was shot dead by police officers who were chasing suspected robbers in the Ijesha, Surulere area of Lagos, on the night of Friday, September 10, 2021. Monsurat was shot as she and her elder sister ran into the premises of their house on Mogaji street, Ijesha; with everyone running helter-skelter and scampering for safety around them.

However, Tosin Ojuade, one of deceased’s sisters, said Monsurat and her sister were about to close their mother’s provision shop, which is close to the house, when they saw people running helter-skelter. She said the sisters ran into the house, and while their mother who was washing clothes in the compound wanted to close the gate, a police officer force the gate open from outside. She said the mother heard a gunshot, and the bullet pierced through the deceased’s thighs. “Concerted efforts were made to save the life of the injured victim. She was immediately taken to the hospital for urgent medical attention but later gave up on the way to the hospital.

Tosin also disclosed that the deceased celebrated her 18th birthday on August 11, and was processing admission to a tertiary institution. After the accident, The Lagos State Police Command confirmed the admission seeker’s killing, saying that an officer has been arrested and detained in relation to the development. The police command made this known in a statement by its Public Relations Officer, Adekunle Ajisebutu, titled, ‘Shooting incident at Ijeshatedo: Erring police officer arrested, detained’.

According to Public Relations Officer, namely Adekunle Ajisebutu, The statement read, “It has come to the knowledge of the Lagos State Police Command that one Monsurat Ojuade (female) aged 18, was hit by a stray bullet at about 0100hrs of 11th September, 2021 when a team of detectives from the State Criminal Investigation Department, Panti, went on investigation activities to effect arrest of a robbery suspect in Ijeshatedo area of the State.

NOTE: should we call that a stray bullet according to Public Relations Officer, namely Adekunle Ajisebutu, in his statement? Which means a police officer can't differentiate a citizen to a criminal. A police that force himself into resident compound and pull a trigger.