By Samuelawoniyi (self media writer) | 7 months ago

In the history of crime in Nigeria , Ishola Oyenusi name also known as ' doctor Rob and kill ' can never be easily forgotten . He was a dreadful armed robber and experts at what he did . During the notorious days of Oyenusi ,one Abubakar Tsav ; a former commissioner of police in Lagos state told the punch newspaper of recent that Oyenusi was an expert armed robber and was ruthless.

According to Abubakar Tsav , he disclosed that during the terror reign of Oyenusi , he was so popular and notorious . He specialized in robbing banks and hijacking cars , always armed with native charms and dangerous weapons . In most cases , he wasted the lives of his victims after getting rid of their properties .

Some police officers were afraid of him, thinking that he could appear and attacked them at the mentioning of his name this was reported according to Tsav . After escaping different attempt to arrest him . He was eventually arrested or apprehended in the year 1971 .

When he was arrested , he kept boasting that he would escaped as usual , he believed his mystical powers could make him to disappear and if he was shut , the bullet will not penetrate , alas , the reverse is the case .

After he was arrested , he was charged to court and was tried before the military tribunal and was executed by firing squad on 8th September 1971 along with his gang members at the Lagos bar beach , Lagos state . Lagosians in their thousands gathered at the bar beach to watch the shameful end of this notorious armed robber identified as Oyenusi .

It was a sad end for this man called doctor Rob and killed ( Oyenusi ) , but the beginning of relief for the people of Lagos state and southwest putting end to a reighn of terror in Yoruba land . 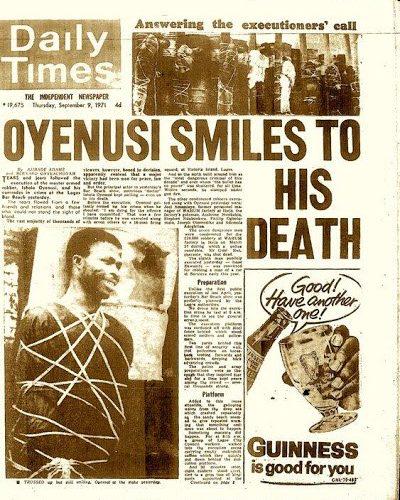