By FactsPlace (self media writer) | 11 months ago

No fewer than four persons died when an accident occurred between a truck and a tricycle in Kogi State. The accident was reported to have happened at Ajaokuta road, close to Lokoja the state capital. 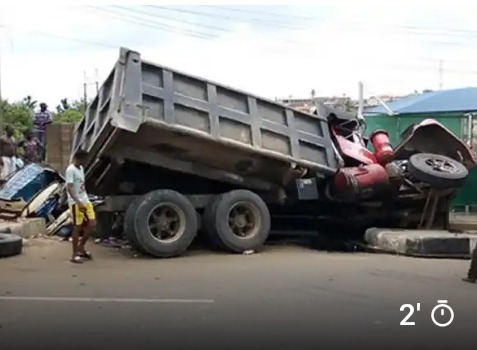 According to a report by the NIGERIAN TRIBUNE, the accident happened around 7 P.M on Thursday.

An eyewitness disclosed that the accident happened when the Truck tried to dodge a bad portion of the road that was under construction. It then lost control and ran over the tricycle.

The NIGERIAN TRIBUNE reported that for several hours, victims of the accident were trapped under the truck as they cried and called for help.

Motorists and passersby did all they could to help to no avail. They tried to get the victims from under the truck, but they could not.

Men of the Federal Roads Safety Corps later arrived at the scene of the accident but they were chased away by some youths of the area who believed that they arrived rather too late.

NIGERIAN TRIBUNE quoted one of the youths to have said: "We have been calling them since but no response. People have been under the trailer for more than three hours and they are just coming. What are they coming to do now when almost all of them are dead?" He asks.

The Gadumo-Lokoja-Ajaokuta road is very known for its potholes. For years now, the condition of the road has remained deplorable.

It is hoped that the ongoing construction works are finished early enough to forestall future accidents.