A nursing mother made an audacious move by concealing some substances suspected to be Indian hemp inside prepared cassava flour popularly known as Akpu which she took to her relation who was in the custody of the National Drug Law Enforcement Agency (NDLEA) in Edo State, the agency announced on Sunday, October 24.

The 35-year-old nursing mother, whose name was given as Marian Drissu, was arrested by operatives of the Edo State command of the agency while trying to smuggle the drug concealed in Akpu which she brought as food for her relation who was in custody of the command.

It was gathered that the woman arrived at the NDLEA cell with the food and on suspicion, officers on ground decided to check the food she brought for the relation. However, during the search, a type of Indian hemp called 'Loud' weighing 13 grammes was found inside the food.

She was promptly arrested for her action, according to a statement by the agency through its Director, Media and Advocacy, Femi Babafemi, while more investigations about her action are continuing. 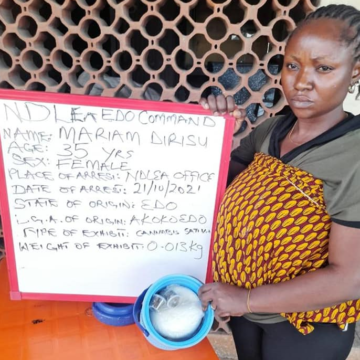 According to the statement: "In a most audacious move, a nursing mother, 35-year-old Mariam Drissu, was arrested at the Edo State command headquarters of the agency while trying to smuggle drugs into the cell for a suspect in custody.

"Officers on duty had, while checking the food brought by Mariam for her relation in custody, discovered 'Loud', a version of Indian hemp, weighing 13 grammes hidden inside the food (Akpu) meant for the suspect in custody.

"She is currently giving more useful information about her activities to officials of the command's headquarters after which she will be prosecuted in the court of law."