By B_Mercedes (self media writer) | 4 months ago

Mrs. Zazi David, a member of Christ Embassy Church located opposite Government House Umuahia, Abia State, is currently explaining herself to men from the state police command following allegations that she scaled hot water mixed with pepper on her househelp, in their apartment located at a housing estate behind Saclux Paint off Aba Road, in Umuahia.

According to ABN TV, the fatally injured Ifunanya had come to church with her injury a few weeks ago.

When questioned about the condition of her domestic servant, Mrs. David claimed that the victim had mistakenly poured herself hot water that she had previously prepared to take a bath with.

Despite her heinous wickedness, she was said to have raised her voice against the church's presiding pastor, who insisted on knowing the truth.

According to ABN TV, Mrs. David, a native of Aboh Mbaise, has meted out inhumane treatment on several occasions to the househelp, who is said to be an orphan, leaving visible marks of violence on her body.

The most recent incident, however, resulted in the victim's skin being peeled off, a development that has since been condemned.

Because of the severity of her injuries, the victim was unable to sit or lie down when she arrived at the police station. 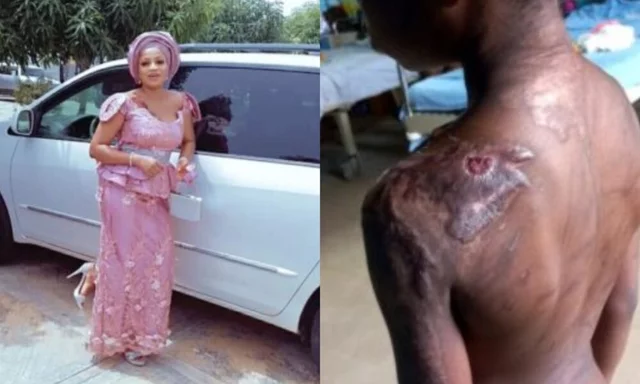 According to an online report; “The cat was let out of the bag last week Sunday when the suspect forced the little girl to drink boiling hot water with pepper. This time, the horrendous attack burnt the little girl’s lips, her mouth, throat, voice box as well as esophagi, thus making it difficult for the girl to even breathe

The victim, who is currently undergoing medical treatment, is said to require extensive surgery on her body in order to recover.

SP Geoffrey Ogbonna, the PPRO of the Abia State command, confirmed the incident and assured that the suspect would be prosecuted once the investigation was completed.﻿

Content created and supplied by: B_Mercedes (via Opera News )