By Latest_trending (self meida writer) | 29 days

A lagos based car wash worker was arrested with a Toyota venza giving to him to wash around festac in lagos.

He was arrested while trying to abscond with the car at the Benin Border by Operative of the Ogun state police command. 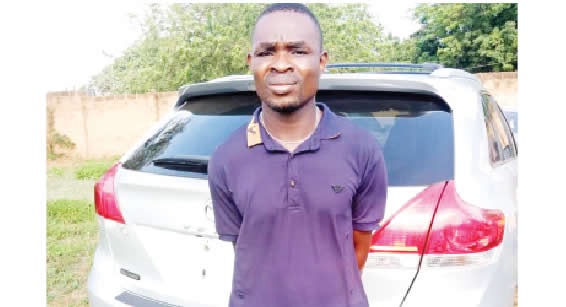 Mr Kazeem Olanrewaju is a car wash worker in festac town lagos, a Toyota venza car was giving to him to wash by one of his customers who later left his shop to have his haircut in a nearby barbers shop.

He was in the possession of the key and before the owner would return he took the car and was driving it to Republic of Benin.

The owner has reported the incidence to the police in festac town who are on the look out for the car.

The suspect was arrested when the DPO of Idiroko was on a routine patrol with his men sighted a Toyota venza without a number plate.

The way he drove brings the attention of the police to him they drove to him to stop him but he ran and that turns into a hot chase.

He was later apprehended and when the car was searched they found out that he has removed the number plate.

He later confesses to his crime of stealing the car taken and that he's taken it to Benin before he was arrested at Idiroko.

Investigation is ongoing by the police to know the number of such crime that have been perpetrated by the assailant.

Many people have been reacting towards this incidence, some of their comments and reactions are shared below.

Content created and supplied by: Latest_trending (via Opera News )

Ladies, Checkout 6 Different Types Of Abaya You Can Wear