Lessons to learn, as woman bravery led to the arrest of armed robber who wanted to rob them 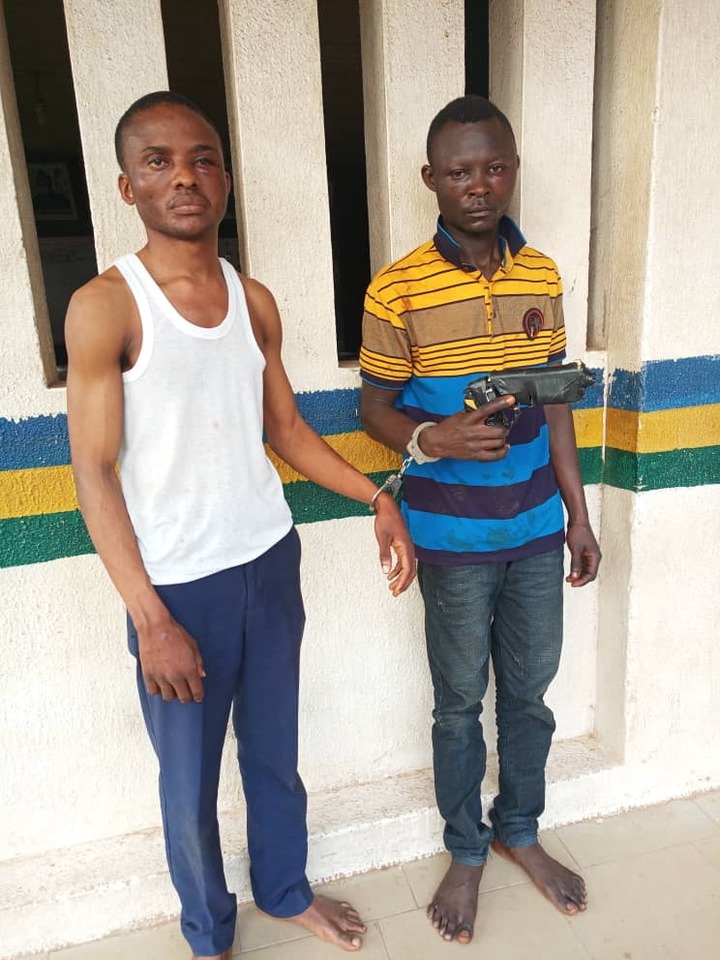 In a news that was published by Linda Ikeji Blog this afternoon, it has been alleged that the Ogun State Police Command, Ibara Police Division, has successfully arrested two suspects, who connived together to rob a microfinance bank of the sum of N3m inside a commercial bank, where the staff members of the microfinance bank went to withdraw the money.

Information that was given concerning the incident that happened made it known that, one of the staff members of the microfinance bank, Olagoke Dare already planned with the armed robber, whose name was given as Idowu Tunde on how the operation will be carried out and due to this, he made a fake gun and gave it to him to use for the operation.

However, after Olagoke and the other female staff of the microfinance bank, Agbejo Mary finished withdrawing money, they entered inside their car, as the robber, who had already been inside the car all along, came from the backseat and pointed his fake gun at them but, his plans failed, as Mary detected that it was a fake gun and dragged the gun from his hands and immediately raised an alarm to draw people's attention.

Two lessons to learn from the incident...

1. Had it been that Mary was afraid of been attacked or harmed, she would not have dragged the gun, neither would she have raised an alarm to call for people's attention but, due to the fact that she was brave, her bravery led to the arrest of Idowu Tunde, who wanted to rob her of her boss' money.

Aside this, if the suspect was not caught, Mary and Olagoke would have been the main suspects, as Mary will be accused of what she knows nothing about and might as well be told to be paying the stolen money gradually from her monthly salary.

2. Another lesson to be learnt from this is that, the public should always avoid lynching offenders or carrying out jungle justice, because, jungle justice doesn't give room for police or security operatives to go deeper while investigating a criminal case. Had it been that when Idowu Tunde was chased by the angry mob, he was lynched along the line, no one would have knew that it was the company's staff that connived with him.

However, instead of the mob lynching him, they called police operatives from Ibara Police Division and handed over the suspect to them and during investigation, Idowu implicated Olagoke, as the one who gave him the gun to rob them as soon as they leave the bank, where they went to withdraw.