Cocaine From Brazil: The story of audacious attempts to bring a record kilogram of the hard drug in

By NDLEA_Today (self media writer) | 1 month ago

From the land of Samba and Jogo Bonito (the beautiful game of football) came a series of cocaine consignments―by air and sea. But NDLEA agents foiled the attempts to traffick them into and across Nigeria by intercepting the consignments at the points of entry. The drug-from-Brazil episode, which has various strands, ended in a victory for the anti-narcotics agency. If anything, the string of events, once again, has reminded the public why the South American country is regarded as a High-Risk Destination per hard drug categorization.

The biggest of the seized consignments took place on January 27, 2021, when NDLEA officers at the Murtala Mohammed International Airport, Ikeja, Lagos, caught a trafficker with what is now a record single biggest seizure of cocaine from an individual in the past 15 years. The suspect, a Nigerian named Jennifer Onyejegbu Ifesinachi, flew into the country aboard the Ethiopian Airline from the Brazilian state of Sao Paulo, where she lived and worked as a hairstylist. And straightaway, she walked into the hands of NDLEA agents. Routine profiling of travellers arriving from countries listed as “high risk” is part of the standard operating procedure of anti-narcotics agencies. On this day, the 33-year-old, whose name was picked from the manifest, was asked to step into the NDLEA office for routine profiling. Lo and behold, a thorough search of her belongings produced the incriminating substance, concealed inside 16 duvets in her travel bags. It turned out the substance, weighing 26.85 kg, was cocaine, valued at N21 billion on the street.

During questioning, Jennifer Onyejegbu Ifesinachi confessed she took on the job of trafficking the substance, from Sao Paulo to Lagos for N2 million.

The arrest of Jennifer Onyejegbu Ifesinachi coincided with other arrests which was the climax of a chain of events that started two days earlier on January 25, at the same airport, when a piece of red luggage was declared leftover at the E Arrival Hall after the inward clearance of passengers on Ethiopian airline. The attention of NDLEA operatives was drawn to the unclaimed luggage, whose information tag indicated the origination was Sao Paulo, Brazil. The information set off an alarm bell because Brazil, by records and trends of arrest and seizures, is a destination classified as a high-risk country. Subsequently, the bag was transferred to the NDLEA administrative office at the passenger terminal of the airport, for detention. Thereafter, the drama began. It started with a tip-off to the NDLEA MMIA Command. In came an intelligence report of a purported plan to clear a consignment containing hard drugs through the Lagos airport. Coincidentally, the details sent matched the red bag earlier detained by the operatives at the Lagos airport. NDLEA set in motion a coordinated operation that led to the arrest of those behind the red luggage from Brazil on January 27, 2021.

Contact with the faceless group by an undercover agent of NDLEA brought into the open a certain Abubakar Aliyu. Guided by the Operation and Investigation Unit of the agency, the undercover agent successfully lured the suspect into the cargo terminal of the airport where he was arrested. The suspect revealed to NDLEA operatives that another person was on his way to receive the bag based on the instruction of a shadowy figure he identified as Ikechukwu Eze. The man who came to receive the bag, Emmanuel Iyke Aniebonam, also walked into the NDLEA net at NAHCO. During a preliminary interview by a team of investigators, Aniebonam confessed that he was instructed to receive the consignment. Again, his instruction came from the shadowy Ikechukwu Eze. A plan was set in motion to lure the mastermind into the open. For the second time, instead of appearing in person, Ikechukwu Eze sent another courier who was mandated to receive the consignment and take it to Ibis Royal Hotel, a few miles away from the airport. The follow-up operation at the hotel netted another member of the cartel, Onwurah Kelvin, who confessed that he was sent by Ikechukwu Eze to receive the consignment. The game of hide-and-seek over, the detained bag was opened in the presence of all three suspects. Found neatly concealed and sewn inside five children’s duvets, was a whitish powder that was proven to be cocaine after a test. The drug, weighing 8.4kg was estimated to be worth over N7 billion. 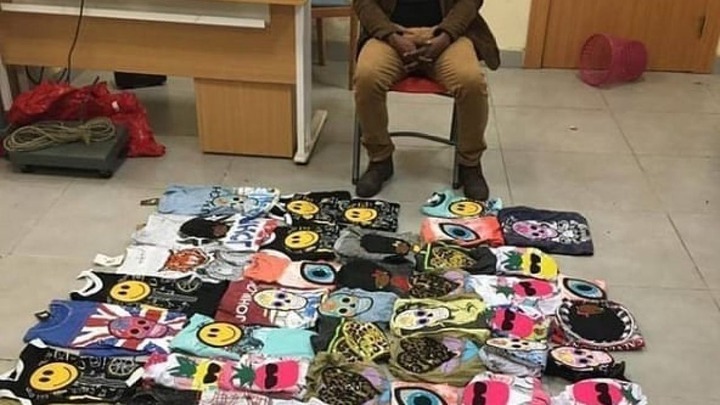 Just five days later, another trafficker, coming from Brazil, Ukaegbu Bright Onyekachi was nabbed with 3.30 kg of cocaine. Arrested on Monday, February 1, during the inward clearance of passengers on Ethiopian airline at the E Arrival Hall of the MMIA, Onyekachi, arriving onboard Ethiopian Airways from São Paulo, Brazil via Addis Ababa had cleverly concealed the drug in T-shirts stickers, but the ruse did not deceive the eagle-eyed NDLEA operatives.

That trilogy was not the end of the Drug-from-Brazil story. Away from the airport, another interception was made at the Lagos’ Tin Can Port where NDLEA agents intercepted 40 parcels of cocaine, weighing 43.11kg, with an estimated street value of over N32 billion. The consignment had arrived onboard a vessel marked MV SPAR SCORPIO at the port from Brazil. The vessel was immediately put under surveillance by operatives of the Tin Can Command of the NDLEA. The surveillance was maintained for days until two clearing agents showed up on February 8, to clear the vessel’s cargo. Promptly arrested, the clearing agents and NDLEA agents boarded MV SPAR SCORPIO for a thorough search that led to the discovery of 40 compressed parcels, which after laboratory investigations tested positive to cocaine.

Over two weeks, a total of at least 81.66 kg of cocaine worth N63b was recovered by NDLEA in Lagos. All from Brazil.

Yet it did not end there: on April 16, a suspect Ezekiel Chibuzo flew into Lagos aboard Qatar Airline from Brazil and was arrested for drug ingestion. In the end, he excreted 99 wraps of cocaine!

The Brazil cocaine chronicle provides a vignette about the outflow of illicit substances from a country listed as a High-Risk destination. Collectively, the saga was a litmus test that the NDLEA passed spectacularly, and in the process passed on the unmistakable message that the anti-drug war has entered into a new phase.