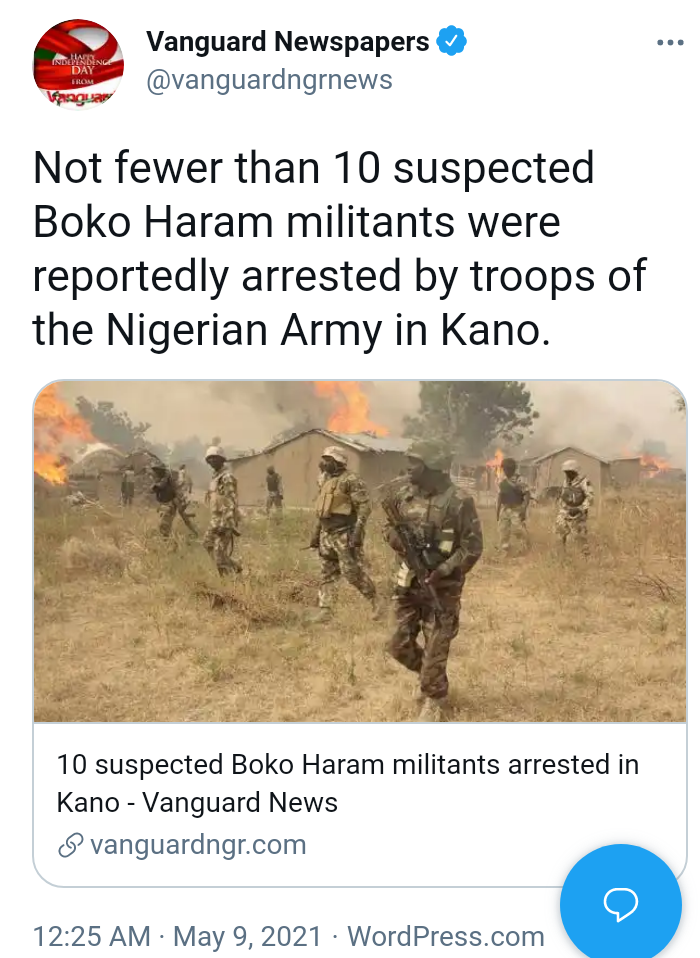 Not fewer than 10 suspected Boko Haram militants were reportedly arrested by troops of the Nigerian Army in Kano.

It was gathered that the troops arrested the persons when they stormed Filin Lazio in Hotoro area of Kano metropolis on Saturday evening and raided a mosque and some houses.

Sources in the area revealed that the raid exercise was carried out while the Muslim faithful were breaking their Ramadan fast and that which send fears down the spine of the residents. 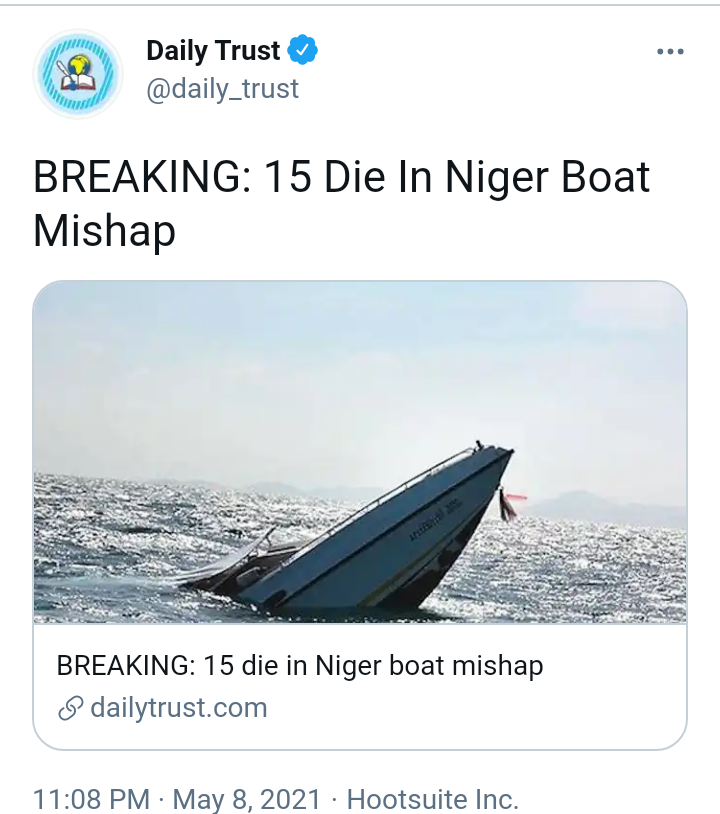 At least, 15 people have died in a boat mishap in Tijana, Munya Local Government Area of Niger State while several others are still missing.

The boat mishap occurred at about 6:00 pm on Saturday when the villagers were returning from a local market in Zumba, Shiroro Local Government Area of the state.

The Sarkin Kasuwan (Head of the Market) of Zumba, Mallam Adamu Ahmed, who confirmed the incident to Daily Trust, said the local boat was carrying over 60 people, including women and children when it capsized due to a heavy windstorm.

Among the victims were some returnees who had earlier fled their homes with their children due to bandits’ attacks.

Ahmed said 17 people have been rescued alive through the efforts of local divers who swung into action immediately after the incident was reported.

The local divers had defied the heavy downpour to continue their rescue operation as at the time of filing this reports as no help yet from the government. 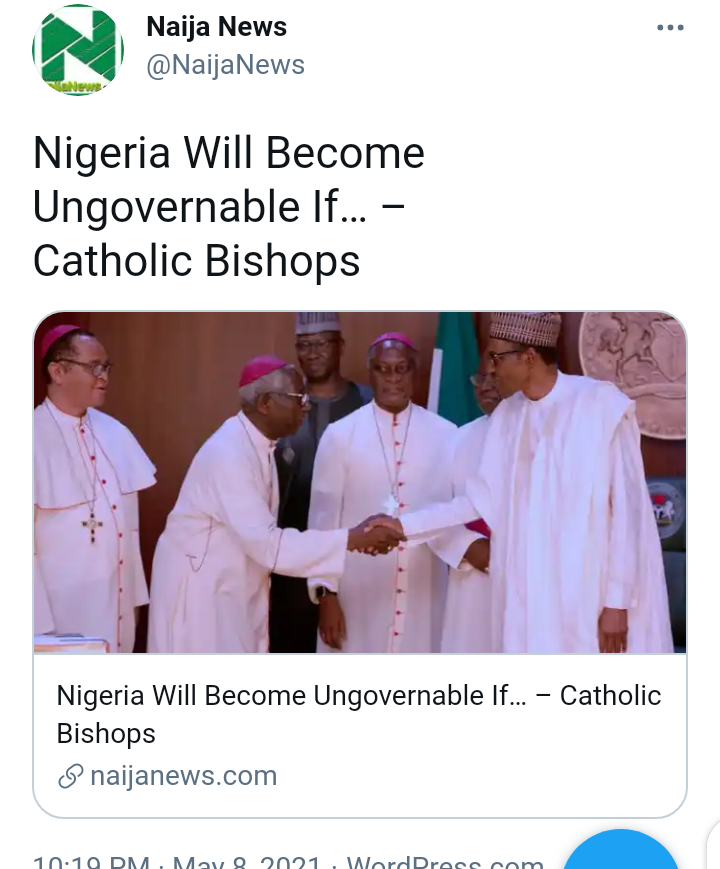 The Catholic Bishops’ Conference of Nigeria (CBCN) says Nigeria will “become ungovernable” if the federal government continues to ignore criticisms and recommendations.

In a statement issued on Friday and signed by the President of CBCN, Augustine Akubeze, the clergies also asked President Muhammadu Buhari to address the country on his effort in tackling insecurity.

The bishops, who also bemoaned the spate of abduction of students by bandits, said Nigerians want to “directly hear” from Buhari — and not presidential spokespersons.

The Catholic leaders urged the president to convene a national conference geared towards implementing restructuring and devolution of power. 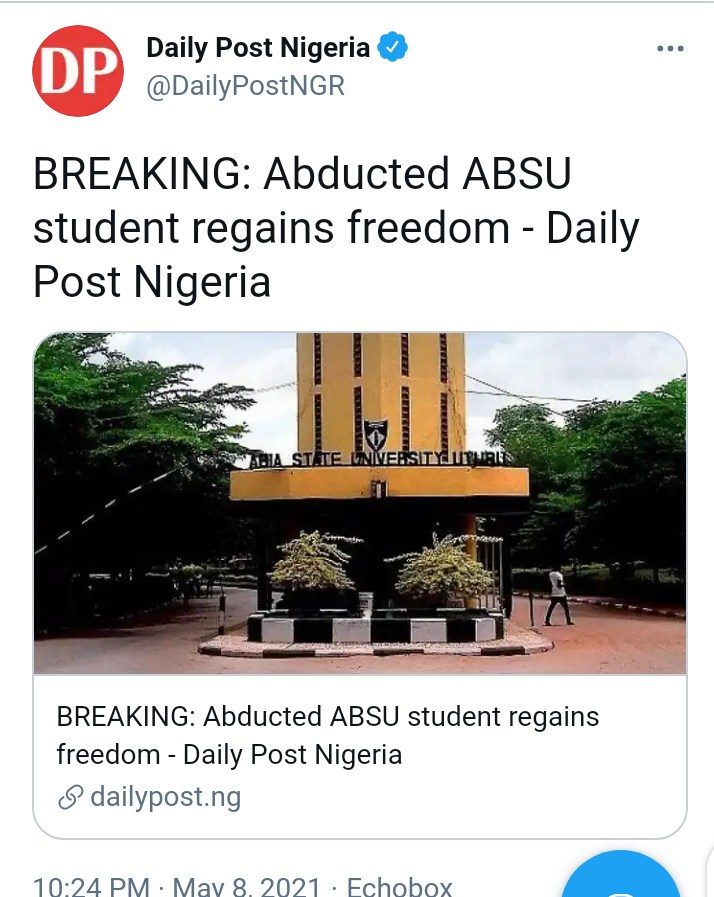 The only student of Abia State University (ABSU), Uturu, still left in the custody of a criminal gang, which abducted some persons while journeying along the Okigwe-Uturu Road, has been released.

Governor Ikpeazu,who thanked God, security agencies and the management of ABSU for the release of the abducted student, expressed joy at the development and vowed that he will surely take justice to those involved in the kidnap and will not share the State with criminal elements. 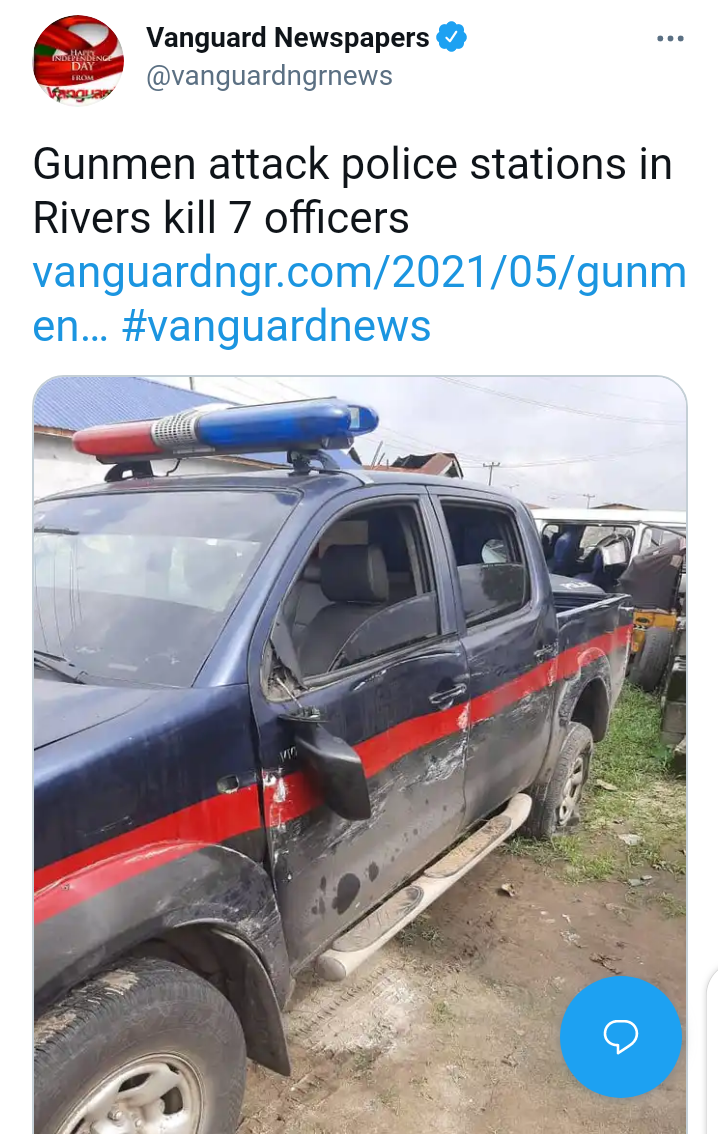 Gunmen attacked two police stations and checkpoints in Port Harcourt on Friday and killed seven police officers in the process.

In a statement issued in Port Harcourt on Saturday, a police spokesman in Rivers, SP Nnamdi Omoni, described the attacks as unprovoked and mindless.

Police and Customs officers manning various security checkpoints at the Ikwerre Local Government Area of the state were killed during the attacks.

Omoni stated that the attacks were carried out in the late hours of Friday at three different police posts. 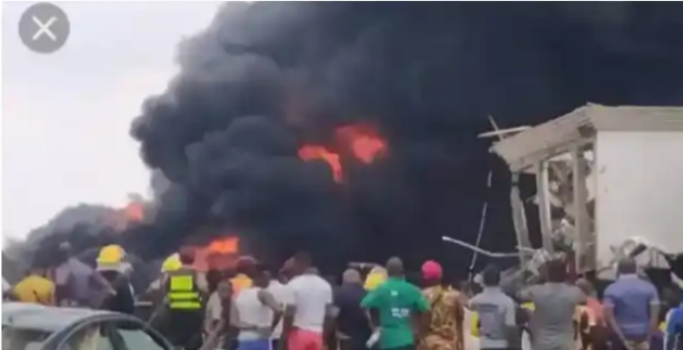 Today's Headlines: OAP Murdered By Unknown Gunmen In Ibadan, Tope Alabi Thanks Fans For Their Support