By Religionhubblog (self media writer) | 23 days ago

According to a report by Instablog9ja, a lady who was identified as Omowunmi has been arrested by men of the Nigerian Police Force after she caused the death her children by throwing them inside a well. The Suspect, Omowunmi revealed that it was the difficulty in feeding and catering for her kids after she was deported from abroad that pushed her into taking that drastic decision. 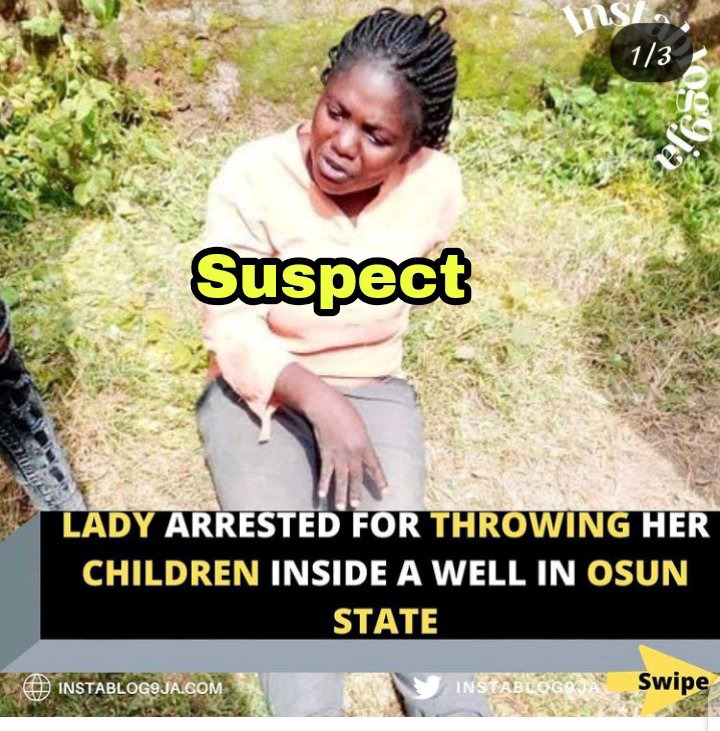 However, I think Omowunmi is wrong to have done what she did and that is why I will be sharing with you three things that she ought to have done instead of throwing those children inside a well and also wasting their lives.

1. Taking them to an Orphanage

As a matter of fact, any standard orphanage will be ready to help her since the children are still very young. The first daughter was 7 years old while the other one was 5 as at the time of the sad incident.

2. Seeking for help on social media

The world is evolving on daily basis and the introduction of social media has really helped a lot of people to meet their destiny helpers. If the Suspect, Omowunmi has decided to solicit for help on the internet, she might have encountered a helper. Although, the Internet is full of people who claimed to be poor or suffering in bid to get money from people but that doesn't change the fact that, some people really needs the help.

3. Informing the Church or mosque if she attends one

One of the places where she could easily get people to help her is a religious center. Although, it wasn't if Omowunmi is a Christian or not but if she has discussed with a church or mosque, they would definitely help her with either cash or even all necessary things she needs to live a good life.

On several occasions, I have seen people who get help by just stating their life issues before a religious setting and I think she would have enjoyed that benefit if she informed her pastor or cleric.