Three young men who were said to be members of a dreaded cult group, the Payton Confraternity, have been arrested by operatives of the Anambra State Police Command after they were found to be driving recklessly on a major road in the state, the command announced on Monday night, April 19.

The three men, whose names were given as Chinedu Aniegbunam, aged 23 years; Okoye Tochukwu, aged 17 years; and Okechukwu Chijioke, aged 23 years, were arrested by operatives attached to Anti-cultism unit of the command while driving recklessly along Nise road in Awka, the state capital. 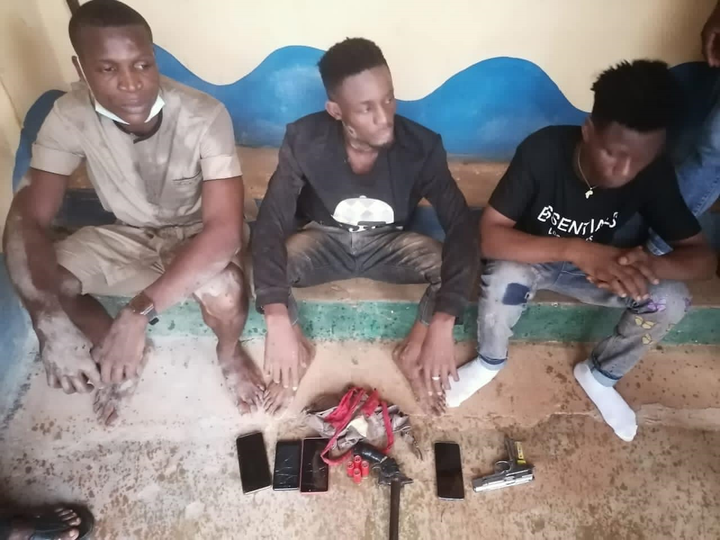 It was gathered that the operatives accosted them after seeing that they were inside a vehicle and were driving recklessly which made them to become suspicious. The policemen later stopped them and decided to search them.

According to a statement by the state police command through its Public Relations Officer, Ikenga Tochukwu, a Deputy Superintendent of Police, upon searching them, items found with them in the car included one English-made pistol, one locally- made pistol, five live bullets, phones, among others.

The statement added that upon interrogation, the three men confessed to be members of the Payton Confraternity, a cult group that is dreaded in the state by many people.

According to the statement posted on the Facebook wall of the command on Monday night: "Police operatives attached to Anti-cultism unit of the command have arrested three young members who are members of a dreaded cult group, the Payton Confraternity.

"They were arrested by police operatives on patrol who accosted the suspects when they drove in a reckless and suspicious manner along Nise road in Awka South. They all voluntarily confessed to be members of Payton Confraternity.

"Some of the exhibits recovered from them included one English-made pistol, one locally- made pistol, five live bullets, phones, among others.

"They will be charged to court on conclusion of investigations."

Ladies, here are 20+ short bob hairstyles you should try

12 Signs Someone Is Missing You