EndSARS Anniversary: Police in Lagos have arrested and arraigned 34 criminals.

By Ola_oluwadamilola (self media writer) | 1 month ago

Following the #EndSars anniversary demonstration on Wednesday, Oct. 20, the Lagos State Police Command said on Thursday that 34 individuals had been arrested.

The demonstration, which was held to mark the one-year anniversary of ENDSARS, was carried out by a motorcade carrying demonstrators past the Lekki toll gate, according to the Nigerian News Agency (NAN).

However, CSP Adekunle Ajisebutu, a spokeswoman for the Lagos police command, alleged that after the protest had concluded, some hoodlums took advantage of the jam to attack cars in a statement released to the media.

"At around 11:30 p.m., after the genuine demonstrators had departed quietly and without incident, hoodlums took advantage of the jam and began targeting law-abiding citizens."

"The hoodlums stabbed one Shina Edun of Man O' War Nigeria, who was affiliated to the Lekki Concession Company, in the stomach. The sufferer was taken to the hospital right away and is currently undergoing medical treatment.

"Following the hoodlums' violent conduct, the police reacted quickly and dispersed them with minimal force."

"As a result, 34 hoodlums were apprehended. They were found with two cutlasses, a hammer, a jack knife, and several charms," he claimed. The suspects were arraigned on the same day before Magistrate Israel Adelakunon at Oshodi Magistrates' Court 5, according to the PPRO, for behaviour likely to cause a breach of the peace.

"30 others pleaded not guilty and were granted bail in the sum of N20,000 with one surety in the same sum," while two of the accused pled guilty and were fined N10,000 apiece.

"One of them was released and acquitted, while the other, Chukwu Chika, who was apprehended with a sharp cutlass and several charms confessed that he came to cause violence and mayhem on purpose," he claimed.

According to Ajisebutu, the judge ordered the police to conduct a comprehensive investigation into his case and charge him appropriately in court. 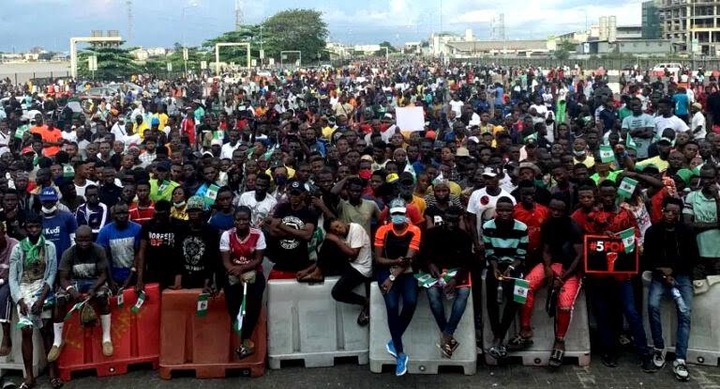 CP Hakeem Odumosu had conveyed the command's sincere thanks to members of the public for their enormous support before, during, and after the protests, according to the police spokesperson.

"The CP also expressed his regret to any members of the media whose rights may have been mistakenly infringed upon when security officers attempted to maintain law and order.

"In addition, the CP assures the public that, in accordance with IGP Alkali Baba Usman's strategy of making the police accountable to the people, training and retraining of officers and men would continue to be intensified."

"The Commissioner of Police wishes to take this opportunity to express his gratitude to Governor Babajide Sanwo-Olu and members of the State Executive Council for their unwavering support for security forces during the demonstration," he added.

Similarly, Ajisebutu said the CP praised the youths and other stakeholders for their understanding of the current peace and the state's secure environment, saying that their collaboration and support helped to prevent another mayhem like the 2020 protests.

"To accomplish all of this, the command has committed to redouble its efforts in providing watertight security and protection of the lives and property of all law-abiding individuals in the state," he stated.

Content created and supplied by: Ola_oluwadamilola (via Opera News )