A member of a three-man kidnapping gang who intercepted a trailer heading for Lagos State from Delta State with the driver and his lover inside has been arrested by operatives of the Delta State Police Command after they abducted the lover, the state police command announced on Friday, October 8.

The kidnapper, whose name was given as Emuesiri Umukoro, aged 27 years and said to be a member of the kidnapping gang, was arrested when operatives of the Oghara Division of the state police command launched a manhunt following a complaint lodged by the trailer driver.

According to reports, the driver of the trailer was heading to Lagos in company of his lover when they were intercepted along Koko Road junction by the three-man kidnapping gang who blocked the trailer on the road. 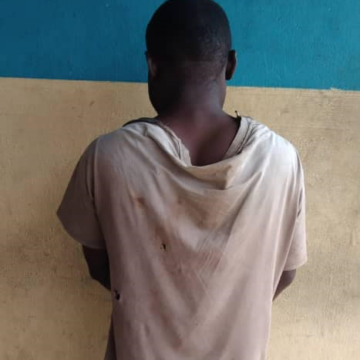 It was gathered that upon sighting the three men, the trailer driver jumped down from the vehicle and escaped. The kidnappers eventually abducted his lover and forcefully took her away into the forest.

According to information provided by the state police command through its Public Relations Officer, Bright Edafe, on Friday, following the abduction of his lover, the driver eventually reported the matter at the Oghara Division, causing the policemen to launch a manhunt.

The policemen however pursued them and while two other members of the gang escaped into the forest, Umukoro was not lucky as he was caught up with and arrested by the policemen. The abandoned lady was also rescued.

At the police station, he was said to have confessed to be a member of the gang that abducted the lady while the lady was also said to have identified him as one of those who abducted her from inside her lover's trailer.

The police in the state said more investigations are ongoing while a manhunt has been launched for the fleeing members of the gang.