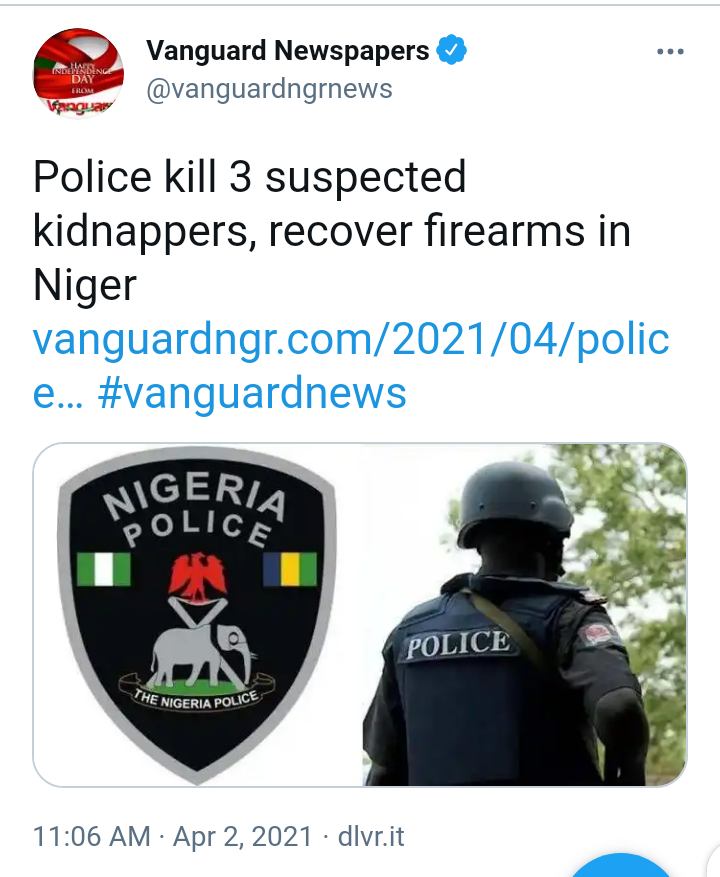 The Police Command in Niger have shot and killed three suspected kidnappers and recovered firearms at Fapo village of Lapai Local Government Area of the state.

The command’s Public Relations Officer, ASP Wasiu Abiodun, disclosed this in a statement in Minna on Saturday.

Abiodun said on March 14 at about 1500 hours, credible information was received that gunmen had kidnapped three persons at different locations and took them to an unknown destination.

Based on the information, he said, Police Operatives attached to Lapai Division and local vigilantes, mobilised and trailed the hoodlums to a place near Fapo village via Lapai local government area where they were engaged in a fierce gun battle.

He said three suspected kidnappers were killed, two AK 47 rifles and one locally fabricated AK 47 rifle were recovered during the encounter.

The police spokesman said other members of the syndicate escaped with gunshot wounds, and that the three victims were rescued unhurt.

He said that the command would continue the onslaught against the hoodlums and urged residents to report anyone seen with bullet wounds or suspicious behaviour to the nearest Police division. 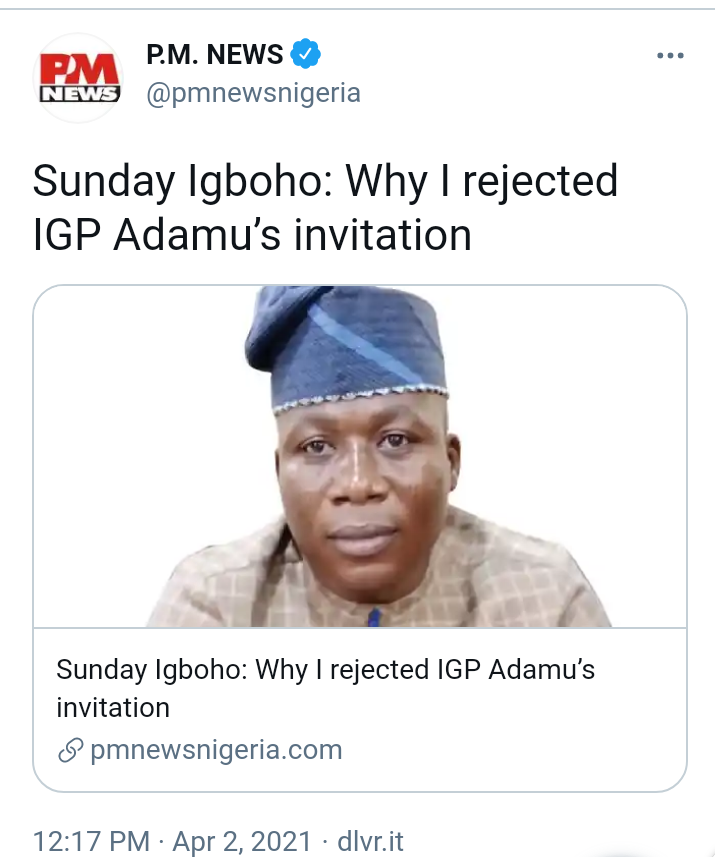 Sunday Adeyemo, a self-acclaimed Yoruba freedom fighter, popularly known as Sunday Igboho has explained why he turned down the invitation from the Inspector-General of Police, Mohammed Adamu.

The letter was sent to the activist on Thursday via DHL and another with about 15 police officers – but both were rejected due to security reasons according to Igboho’s media aide Olayomi Koiki.

Olayomi explained that both were not received by Igboho’s security operatives due to safety reasons as such a letter had purportedly led to the death of Nigerian journalist, Dele Giwa. 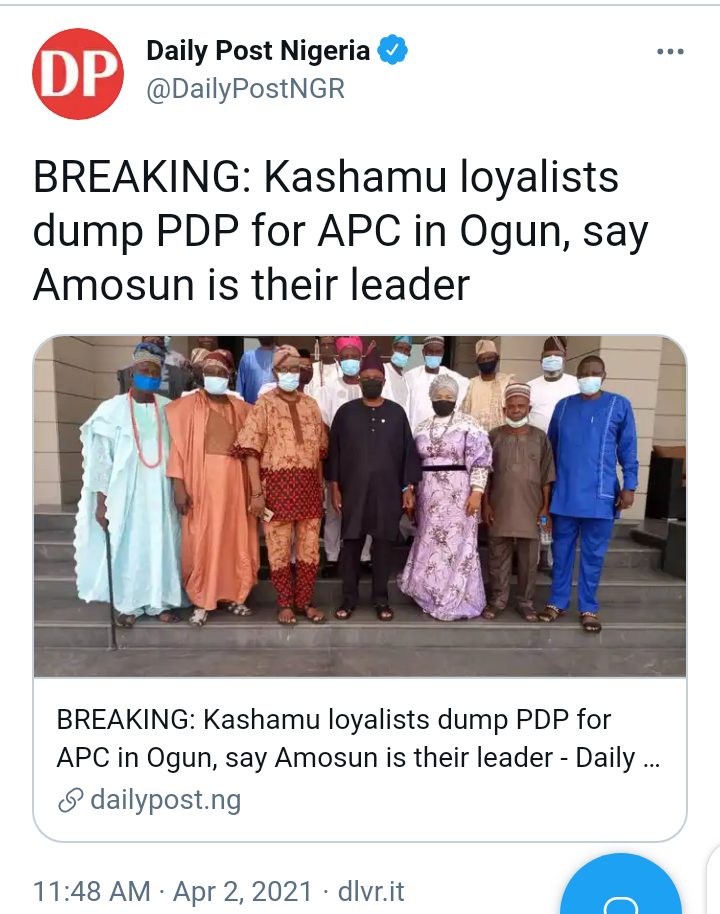 Some loyalists of Late Senator Buruji Kashamu have dumped the Peoples Democratic Party (PDP) for the All Progressives Congress (APC) in Ogun State, saying they want former Governor, Ibikunle Amosun to be their leader.

DAILY POST reports that the PDP defectors were received into the APC by Amosun at his Ibara, Abeokuta residence on Thursday.

Speaking on behalf of other decampees, Chief Olu Azeez from Ijebu North, told our correspondent in an interview that they chose to join the APC under Amosun’s leadership because it is the best option.

Chief Azeez said he and other defectors were with Kashamu until his death, stressing that they have all decided to work with the former Governor as their leader. 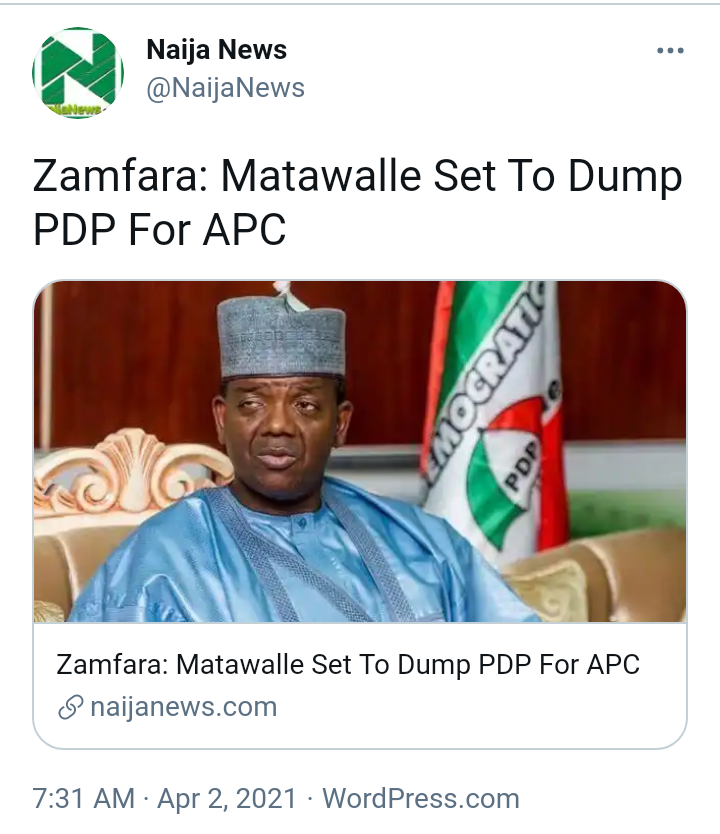 Fresh indications have emerged of a plot by Governor Bello Matawalle of Zamfara State to dump the Peoples Democratic Party (PDP) for the All Progressives Congress (APC).

Recall that the ruling APC had on Thursday extended its membership registration and revalidation exercise for another two weeks.

There have been talks about the planned defection of Matawalle following the judgment of the Supreme Court on the crisis that trailed the primaries of APC in Zamfara.

A former governor of Zamfara State, Senator Ahmed Sani Yarima, had stated last year that plans are on for Matawalle to join the ruling party.

A source told Daily Trust that one of the factors that delayed the defection of the governor was the crisis rocking the APC in the North-west state. 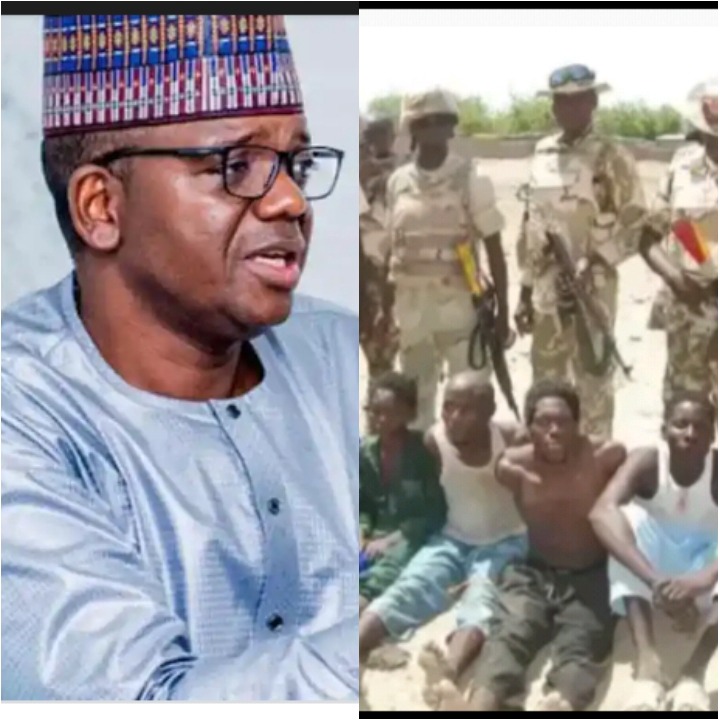 Opinion: Why 'Ka Yi Na Yi' May Be The Best Kannywood Film Of All Time

Video : See Israel and Palestine shooting at each other as they go into full scale war