In Pre-Colonial Igbo society, the type of burial given to a dead individual is usually determined by birth, social rank, wealth and cause of death. When a wealthy person dies, the corpse is buried with an enormous amount of wealth and also instruments depicting the type of work the person did when he or she was alive. 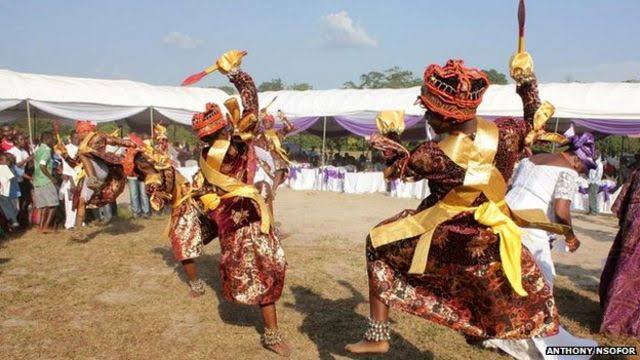 According to Ebo Socrates, a fellow at the Institute of Foundation Studies, he opined that their status in the land of the dead, which by the way is not far removed from the community depends on how well they had lived and how well their progeny had discharged their duties towards them, especially by according them a befitting burial.

Therefore, a slave in ancient Igbo society hardly received any recognition after death; as their graves are usually shallow with little or no burial ceremonies.

Most Igbo societies believe that when a slave dies, he or she passes on as a slave from this world to a slave in the next world. Therefore, freeborn are the only ones that receive full respect and burial rites when being buried.

In Igbo Land, people who died of unnatural causes (onwu ekwensu) such as home accidents, during childbirths, abnormal diseases, lunatics, suicide and those murdered or drowned, hardly get any recognition in Igbo land, unless they died in war.

A vivid example of this illustration is the death of Okonkwo in Chinua Achebe’s “things fall apart”. In the book, Okonkwo committed suicide after killing a white missionary, he wasn’t buried in the community and was thrown into the evil forest.

Basden (1971:25) observes that among the Igbo people, it was customary to put to death one or more slaves to accompany a chief or a leading social figure to the grave. One of the victims is made to carry a bag which the personal treasures of the deceased we placed such as his cup, snuff box and kolanuts.

The practice of burying wealthy people or chiefs with their treasury and ornaments is an ancient Igbo practice following archeological excavations at various places in Igbo land dating about 900AD (Igbo Ukwu / Nri), where Eze Nri was buried with bronze pendants and beads.