See what a woman did, after LASTMA officials tried to confiscate her car.

A woman made a scene along a bustling street in Lagos after she and her male buddy were halted by LASTMA authorities who attempted to hold onto their vehicle.

The woman did not permit the LASTMA official who had slid into the driver's seat to zoom off with the vehicle. She climbed onto the vehicle's rooftop and disregarded pleads from bystanders requesting that she get down. 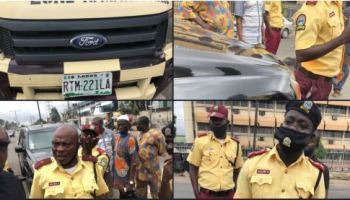 Voices in the foundation are heard saying "they followed one way".

The male counterpart is heard clarifying what occurred. He said that when they arrived at a point along the street, they were approached by a LASTMA officials to make a turn and when they did, the associates of similar LASTMA official who requested that they turn came and halted them and held onto their vehicle.

The man is before long heard calling the lady "Madam V" while requesting that she descend from the vehicle yet she won't and moved from the hood to the top of the vehicle.

She is subsequently seen inside the vehicle, battling for the vehicle keys with the formally dressed LASTMA official to keep him from driving off with their vehicle.

Do you think, she is right for doing such a thing? Drop your reply in the comments section.

Content created and supplied by: 360Xclusive (via Opera News )