Three young men who were said to be fraudsters and who specialised in producing and spending fake naira notes to members of the public have been arrested by operatives of the Katsina State Police Command after they were found with fake N1,000 notes in six bundles, totalling N600,000, the command announced on September 30.

The three men, whose names were given as Anas Lawal, Abdulaziz Wada and Tasi'u Nura, who belonged to a fake naira note syndicate, were said to have been arrested at different times by the operatives of the command.

It was gathered that Lawal was the first member of the syndicate to be arrested by a team of policemen on patrol along Funtua-Katsina Road and during a search on him, he was found in possession of N600,000 fake notes. This made the policemen to promptly arrest him.

At the police station and in the course of investigation, he was said to have told policemen that he received the sum of N1 million fake notes from Abdulaziz Wada. He thereafter led the police operatives to the residence of the said Wada who was equally arrested by the policemen. 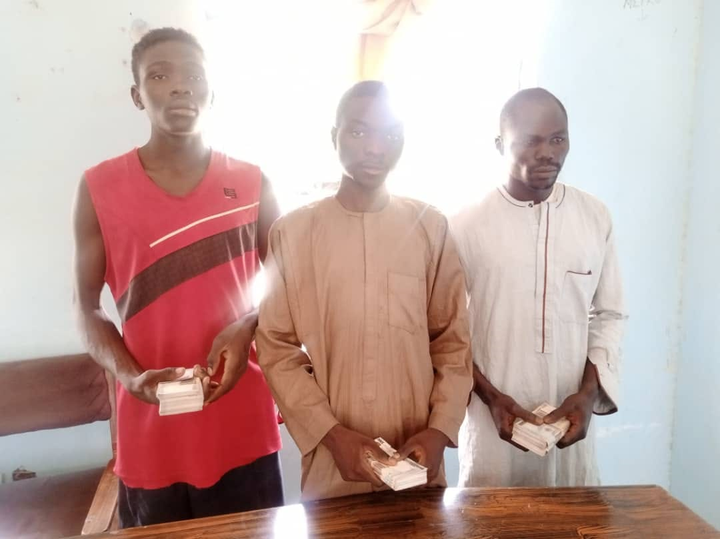 Lawal was also said to have told the policemen during interrogation that he sold a bundle of the fake N1,000 notes to one Tasi'u Nura at the cost of N20,000 so that Nura would also spend the money to purchase goods from members of the public. A bundle of N1,000 is N100,000.

He also led policemen to the residence of Nura where he was also arrested and brought to the command's headquarters in Katsina.

Their nefarious activities were brought to the fore through a statement by the state police command shortly after they were paraded by the police. The statement was issued by the Public Relations Officer of the police command, Isa Gambo, on Thursday evening.

The statement further added that the three men are currently giving policemen useful information about their fraudulent activities while also giving details about other members of the fraud syndicate. They will also be prosecuted at the conclusion of the investigation.

Parts of the statement read: "The command succeeded in arresting one Anas Lawal of Nasarawa village, Dandume Local Government Area of Katsina State, a notorious fraudster and member of a syndicate that specialises in circulating and spending fake naira notes.

"Nemesis caught up with him when he was arrested by a team of policemen on patrol along the Funtua-Katsina Road and he was found in possession of N600,000 fake notes of six bundles of N1,000 each.

"In the course of investigation, he confessed to be a member of the fraud syndicate and admitted that he received N1 million fake naira notes from Abdulaziz Wada. He led policemen to Wada's residence where he was promptly arrested.

"He further confessed to have sold a bundle of the fake naira notes to another syndicate member, Tasi'u Nura, at the cost of N20,000 with a view to using the money to buy goods and services from members of the public. He too was traced to his residence and was arrested.

"They are giving useful information to the policemen and investigation is ongoing with a view to arresting the fleeing members of the syndicate."