By 1stladyblog (self meida writer) | 1 months

The Bible says there is dignity in labor, which means whatever good thing your hands find to do, no matter how low it may appear, get on it with all your heart, and in no distance time, you will be glad that you didn't ignore it. But these days young people don't want to involve themselves in doing legit business or jobs to earn a good living that will bring honor to their names if it not bringing money fast.

Instead, they're rather interested in the fast lane to make wealth. Like seriously people need to think twice about the consequences that come when involving themselves in a job or business that is not legit and try not to be desperate over life on how to get rich and richest. 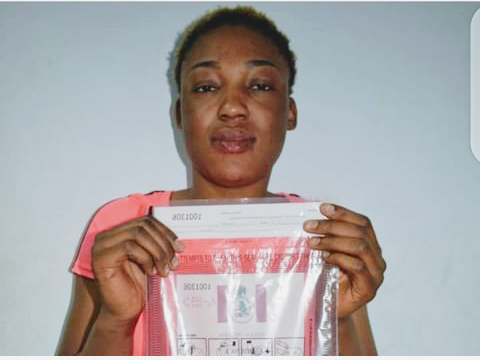 This gist I am about to share with you is a sad and unfortunate situation, it is concerning this Chadian lady identified as Tarmaji who said to have been apprehended by the authority after they found some drug called Heroin on her. According to Punch News Paper, this lady who is Chadian said to have been caught with Heroin in her private part.

Findings had it that she was trying to travel to Ethiopia, so she was at the Nnamdi Azikiwe International airport Abuja to board the Ethiopian flight 911, when she was caught red-handed and arrested by the NDLEA, which they found in her234.35 grams of hard drug called Heroin under her private part. According to the report, the base in Italy since 2016, which means she came to the borders of Libya. How she was caught with the hated drug has to with when agents on narcotics were carrying out an outward when she was caught. 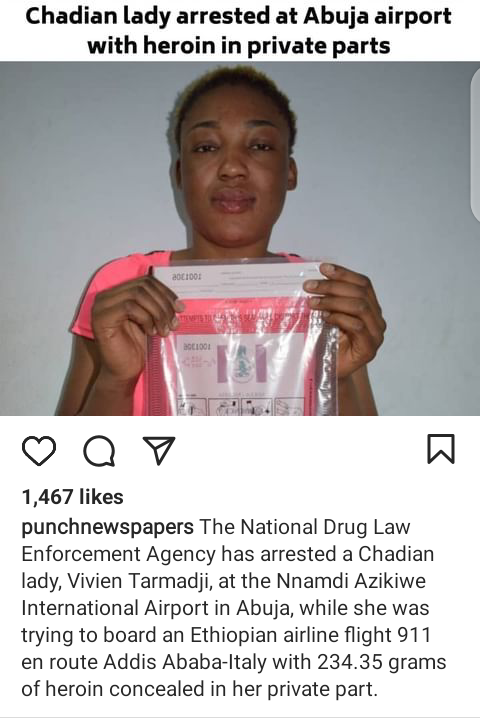 According to her, she was contacted by one main Italy to help him and collect the drug from a man whose name is not mentioned and it was delivered to her when was in a hotel. She further alleged that the said man had brought to her 50 wraps to swallow but she said it not possible for her, so she had the one she can carry and return the rest to on the fact that, she can not contain everything. However, she mentioned the fact that her reasons for coming to Nigeria were to sought for money to foot her house bill, because of the difficulty due to the Covid-19 crisis, She Revealed that the owner of the had promised to pay her the sum of £10,000.

What an unfortunate situation indeed, she should have declined to carry it no matter the amount involves, and now she has been caught. Dear readers, what do you think will be her fate? LIKE, SHARE, and FOLLOW for more updates. Thanks for your contribution.

Checkout 17 Beautiful Chelsea Wallpapers That You Can Use on Your Phone or Laptop.

Elderly Man Who Had No Food And Place To Live Met A Helper On The Road, Read What Later Happened

Video: When He Was Asked "Are You Coming Back To Nigeria Soon?" See What Reno Omokri Said

Opinion: Is Mbaka Indirectly Seeking Independence From the Catholic Church?