By KaptainWendy (self media writer) | 7 months ago 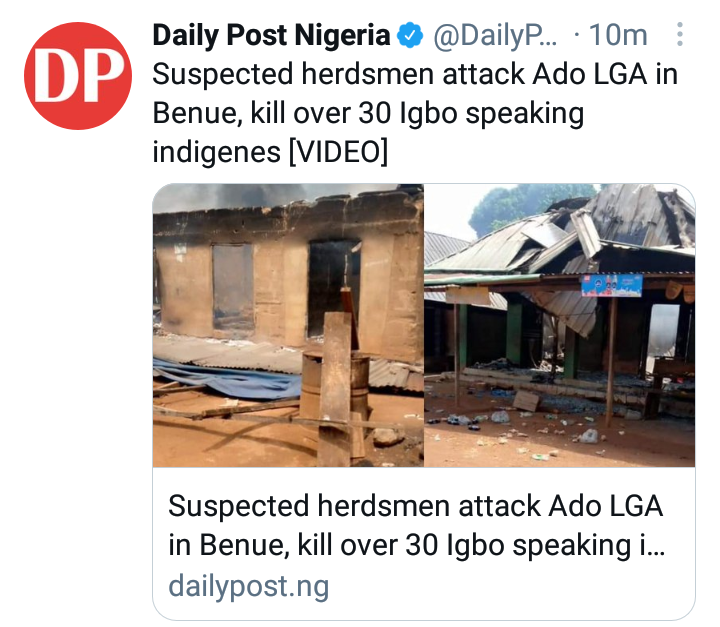 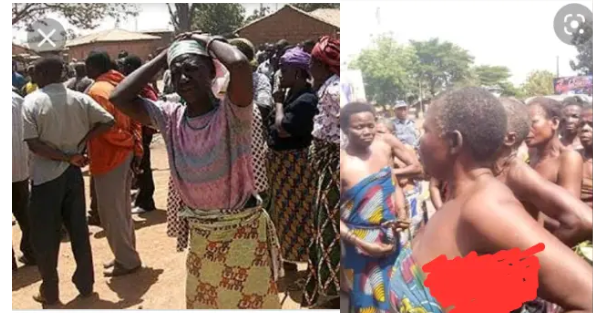 He called on the people of the area to defend themselves, adding that the era of arms folding is over. (Click on this link to watch the video: https://youtu.be/ptzqBc0rdF8 .) 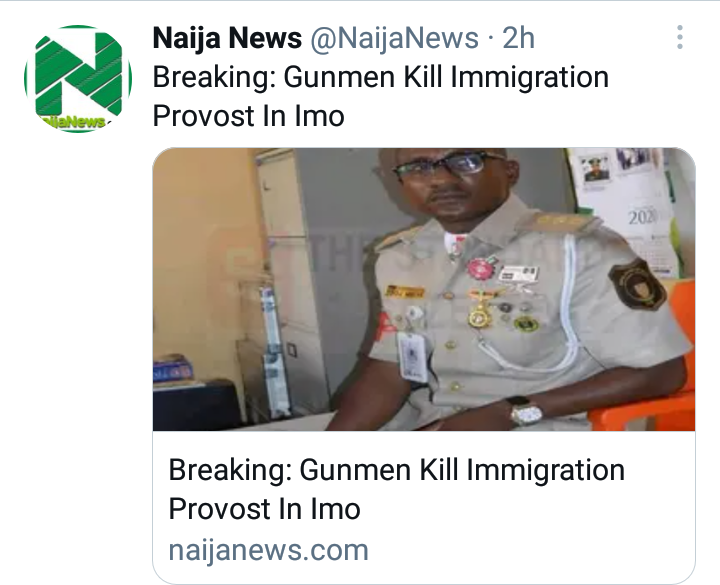 Unknown gunmen have killed a chief provost of the Nigerian Immigration Service in Imo, Okiemute Mrere.

It was gathered that Mrere was killed on Saturday night on Owerri- Port Harcourt Road in Owerri, while remains were discovered in a bush on Sunday morning.

The immigration officer was riding an Immigration Hilux van when he was attacked by the gunmen and shot at close range.

A further report disclosed that the assailant did not take any value from the van and his service pistol was found on him when his body was discovered the next day. The Immigration Hilux van when discovered was riddled with bullets. 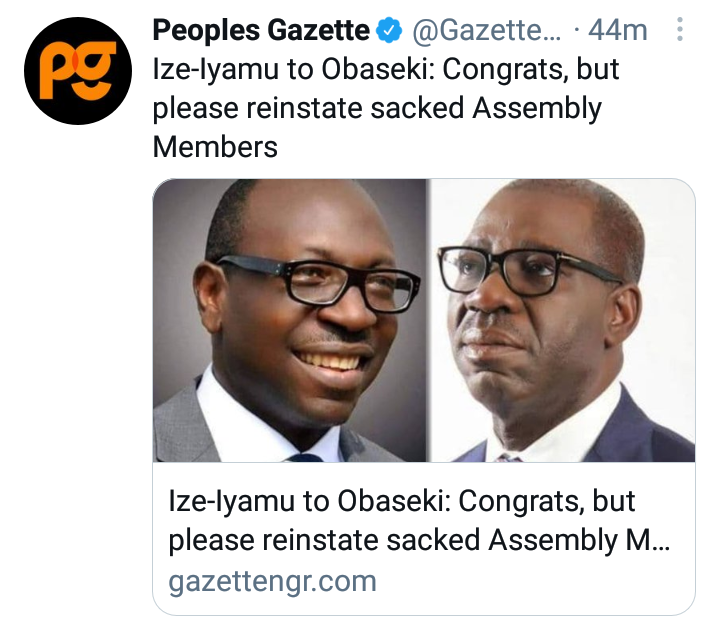 Osagie Ize-Iyamu, the All Progressives Congress (APC) candidate for the 2020 Governorship Election in Edo on Monday congratulated Governor Godwin Obaseki on his victory at the Supreme Court.

Mr Ize-Iyamu in a letter to the governor said that the Friday’s judgment of the apex court has put an end to the series of litigations on the governorship poll that returned Obaseki for a second term.

The APC candidate asked Obaseki to accept his congratulatory message since all the cases were over.

The APC gubernatorial flag bearer, however, appealed to the governor to consider the issue of 14 constituencies, which are without representation at the state House of Assembly since 2019.

Ultimatum To Buhari: Militants Back Tompolo, Threaten Total Blackout In Lagos, Abuja, Others. 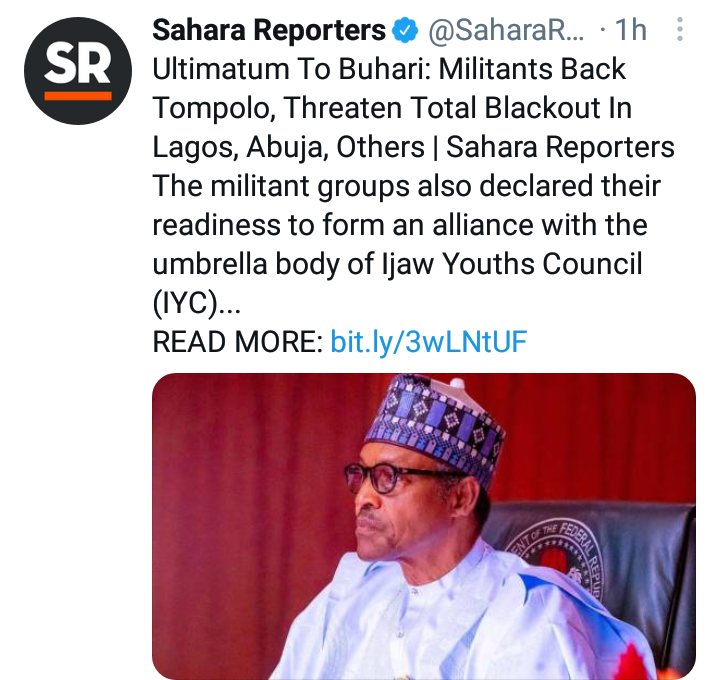 Some militant groups in the nine states of the Niger Delta led by the Supreme Egbesu Freedom Fighters have backed ex-militant, Government Ekpomupolo, also known as Tompolo over the seven-day ultimatum given to President Muhammadu Buhari to immediately constitute a substantive board for the Niger Delta Development Commission (NDDC).

The militant groups also declared their readiness to form an alliance with the umbrella body of Ijaw Youths Council (IYC), while threatening to shut down major oil exploration flow stations and oil wells in the area. 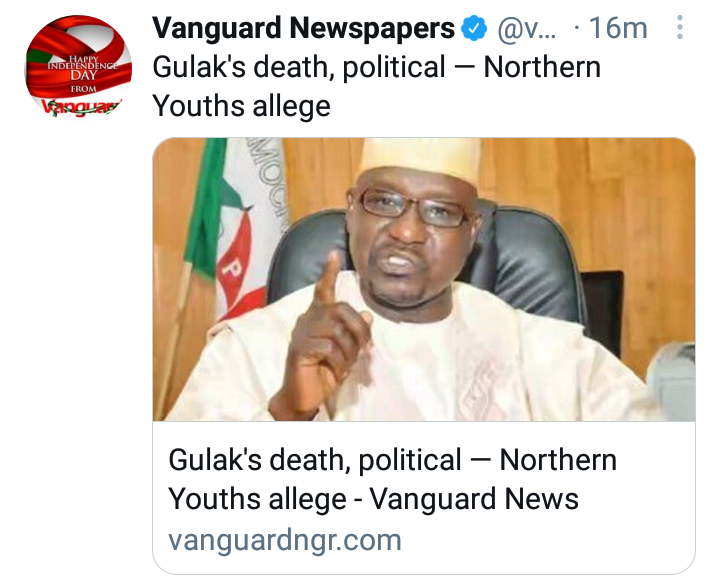 Arewa Youth for Peace and Security (AYPS) has alluded that the killing of Barrister Ahmed Gulak, former Political Adviser to former President Goodluck Jonathan and a chieftain of the All Progressives Congress (APC) was political.

National President of the group, Salisu Magaji cautioned Nigerians against giving Gulak’s murder ethnic colouration, noting that northern elders and leaders have been going to the Southeast on daily basis without any problem and Igbos have also been going about their legitimate businesses in the North without any hitch.

Speaking with journalists in Bauchi on Monday, he advised Nigerians not to allow the assassination of Gulak to be used to further cause division and disunity among Nigerians.

He urged the police to investigate the killing with a view to unraveling the motive and chided some groups in the North for insinuating that Gulak was killed by Igbos because he was a northerner.