It was sheer divine grace that saved all the passengers inside a commercial minibus in the afternoon of Thursday, October 14, when the driver of the minibus lost control and collided with a high capacity bus, causing the minibus to tumble in the process.

The incident, which occurred around 12:15 p.m. at the descent of Stadium Bridge inward Barracks en route Ojuelelgba, was said to have occurred as a result of the recklessness of the minibus driver who was on top speed and was unable to control the situation.

It was gathered that the driver of the minibus, full of passengers, was coming from the Stadium end of the ever-busy highway and after losing control of the vehicle, he collided with the oncoming red high-capacity bus. 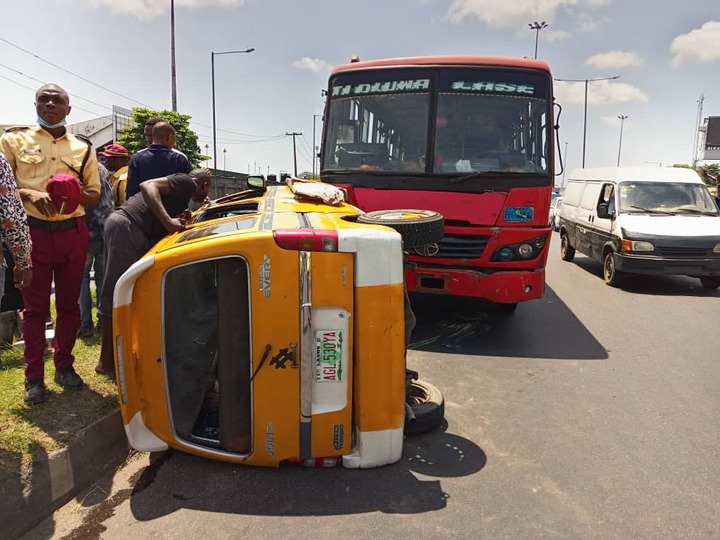 The effect of the high speed of the driver made the minibus to tumble after colliding with the red bus, causing the passengers inside to sustain various degrees of injuries in the process.

It was gathered that following the accident and the distress calls received, emergency officials raced to the scene to give the passengers First Aid treatment before they were moved to the hospital while traffic management officials were also on ground to handle the traffic gridlock that followed the incident.

As of the time of this report, officials of the Lagos State Traffic Management Authority (LASTMA) were on ground to get the minibus involved off the road while other officials of the agency made efforts to ensure better traffic flow on the stretch of the road.

The incident was announced by both LASTMA and the Lagos Traffic Radio 96.1 FM on their Facebook walls while adding that motorists coming towards the area should exercise caution when approaching.