By Kolapopson (self meida writer) | 12 days

The road to success is often carved out with a healthy amount of sincerity in the face of challenges, but if you feel overpowered by insecurities, you may have trouble getting anywhere. 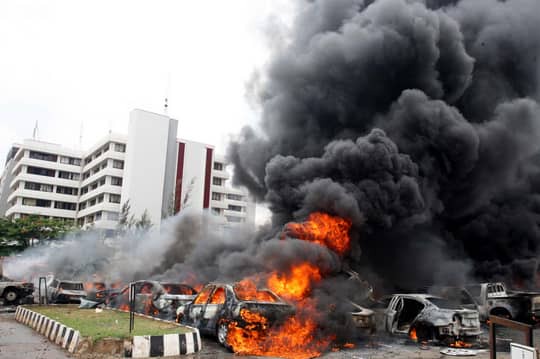 In reality, everyone has something they are insecure about. But the ones who still move forward, despite their insecurities, are the ones who always shine the brightest.

Today the entire systems in Nigeria is at the verge of perdition. The ship of the nation is severely threatened, veering dangerously and heading towards jagged rocks of destruction due to insecurity.

It is so painful that after her 50th Independence, Nigeria , the so called giant of Africa does not maintain any status quo but retrogressing on the verge of a catastrophic calamity of greater magnitude than the conflict of 1967 to 1970 or brazen disenfranchisement of 1993.

It all started like a play when the armed bandits, including foreigners started taking over our forests and apparently setting up temporary camps where they intermittently storm the highways and kidnap travelers who they hold and release in exchange for ransoms. They terrorize, defile and sometimes kill their victims.

Today, the wave of insecurity has assumed an unimaginable dimension that even our armed security apparatus is not safe, let alone innocent citizens. There is virtually no place across the 6 political blocs that is safe, as unpleasant events are unfolding simultaneously.

I am not surprised that the world powers do not sympathize with us, nor our big brother nations, apart from the fact that they have their own peculiar issues. They are waiting for a Nigeria that is broken into pieces. As they did to the soviet Union, due to our population strength, our resources and what the future holds for us, when we eventually get things right. These are threats to them.

Our government should not misconstrue the fact that military rule is no more fashionable, thereby getting it twisted in steping up their efforts. It must be realized that the recent development whereby Boko Haram sect has taken over some part of Niger state, which is the closest state to the seat of power (FCT) is a pointer to the possibility of hijacking the governmental power by the terrorists.

Albert Einstein once arrived at a great philosophy of life "That answers to life questions and challenges change more rapidly than ever before" its therefore necessary to change our approach in addressing the security challenges in Nigeria thus:

-The Federal Government should note that our level of insecurity has advanced beyond what we can manage internally, and the need to seek international assistance as suggested by some concerned citizen is morally inevitable, bearing in mind that the sect also has international connections which can only be conquered by additional forces. Iron sharpens iron.

Besides, they should be funded by the States from the various but unconstitutional security votes. The outfits should man their respective state borders and boundaries for the purpose of securing the people of such state.

-Redirection of the money expended in combating insecurity. Over 4.7trillion expended in the purchase of arms and ammunition in 11years without desired results should be added to the security votes meant for State Governments and the rest blame would be left on the neck of each state.

-There is need for operational control in the Local authorities: intelligence, enforcement, adjudication and correction to foster shared responsibility.

On a final note, we are great together as a nation but there is urgent need for a political solution. There is need for the Presidency to summon a restructuring summit. The aforementioned points are just temporary, Restructuring remains the only solution, we do not need underground war, each region knows what it's agitation is, and our wants may be different, hence, each federating entity can just be allowed to choose its own path.

Together we shall build Nigeria of our dreams.

Content created and supplied by: Kolapopson (via Opera News )

Reactions as The Deputy Governor of Kogi preaches