On sunday morning, as Worshippers made their way along Akwa road Onitsha, they were greeted with an unusual Sight.

A Truck had lost control and fallen down by the side of the Road spilling its Contents in the Gutter. On closer inspection, the Contents of the Truck were revealed to be live Bullets; Cartons of live Bullets.

The Truck had beed fully loaded with live Ammo and was transporting it to an unknown Location when it had apparently lost control and fallen by the side of the Road spilling its Contents all over the Road and into the nearby Gutter. 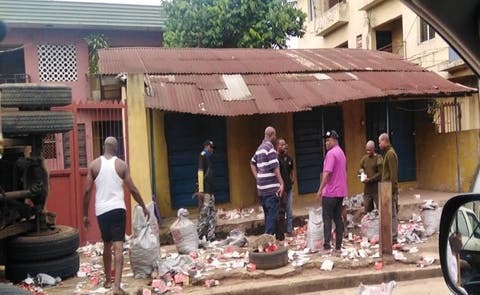 Security Operatives had immediately been alerted and arrived at the scene but not before according to a source, some Boys had made away with some of the Bullets scooping them in their Hands.

“The Truck fell, and the entire Street was full of Bullets. Some Boys even scooped some with their Hands and ran away, before Security People arrived the Scene.”

The Police and Security Forces were reported to have tightened security around there and cordoned up the Area.

“The incident attracted heavy security presence to the Awka Road area and Shoprite axis of the city this morning. The Police first arrived the Area before Soldiers came. They later brought a Tipper, and used payloader to scoop Bullets into the Tipper.

“The Tipper had to make three trips to carry all the Bullets to unknown destination before the Truck was finally towed out of the Ditch,"

When DSP Tochukwu Ikenga, the state Police Public Relations Officer was asked about the Incident by Daily Post, he claimed he was unaware of the Incident and promised to find out and get back to the Reporter.