By Ola_oluwadamilola (self media writer) | 1 month ago

Shehu Sani, the senator who represented Kaduna Central in the eighth Senate, said they spotted the bandits who assaulted them on Wednesday evening looking at the train after the explosion in an interview with Voice of America (VOA) Hausa.

"We spotted them (bandits) from our windows," Sani claimed. I believe they were monitoring to see if our train would derail, allowing them to attack the passengers or kidnap a few of us."

"There were bullets," he claimed, "and they were intended at the driver and his crew." The goal of the (bandits) was to separate the train's head from the remainder of the body. In fact, we were fortunate that no one was hurt."

The explosion, according to the former senator, hit the train, damaging the rail track as well as the driver's cabin.

"Even the driver stated that he didn't know how he managed to get us to safety," he said, maintaining that the driver was bold and gutsy. Later, he admitted that two possibilities were running through his mind. The first option was to stop the train, while the second was to keep going regardless of the consequences.

"However, he went with the second choice. Even with the damaged train tracks, he said he was surprised at how he got us out of danger."

The interview came after the Nigerian Railway Corporation (NRC) said there was no gunfire despite the explosion caused by the set explosives.

"I don't understand why the Nigerian Railway Corporation is trying to hide the fact that there was a bomb blast and gunshots," Sani continued.

"I believe it is not in our best interests to change the narrative at this important time as if it were a minor incident."

He had already announced the event of Wednesday night on his Facebook page, writing, "Yesternight (Wednesday), bandits assaulted the Kaduna-Abuja train." They detonated an explosion that smashed the train engine's windshield and damaged the rail track.

“They began fire as well, aiming for the driver and the tank. It happened between the stations of Dutse and Rijana. The motorist tried to get to the Rigasa station in Kaduna.

"I was on board this morning (Thursday) when our train passed over another explosive-damaged track. We narrowly escaped after the train nearly went off the track.

"Until this issue is resolved, all Kaduna/Abuja train operations must be suspended for today (Thursday)." He said.

The NRC commented on the situation, saying that measures were already underway to restore train service along the route.

Mr Fidet Okhiria, the NRC's Managing Director, told the Nigerian Tribune that the bombs damaged the rail rails halfway between Dutse and Rijana. "Yes, there was an explosion on our train route somewhere between Rijana and Dutse last night (Wednesday)," the NRC boss confirmed. 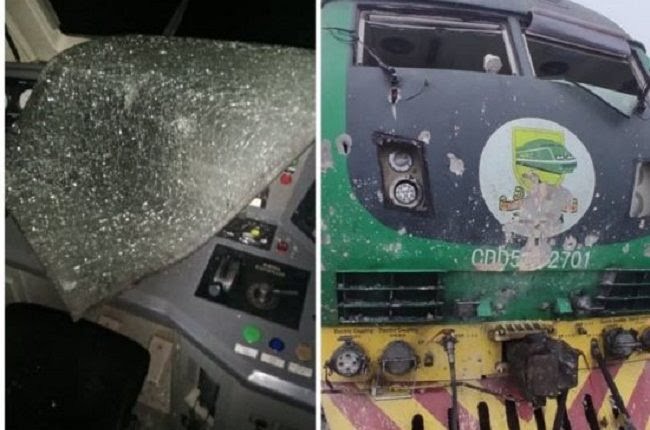 "Efforts are currently underway to fully restore train services along the Kaduna-Abuja route."

"There was nothing like that; only an explosive that went up on the track," the NRC MD stated when asked if firearms were fired at the train driver and the train's tank.

"Did you know we had a rail service this morning (Thursday)?" Nothing compared to bandits shooting at the train. Efforts are presently underway to guarantee that full train service along that route is restored."

The NRC issued an official statement on the incident, apologizing to passengers for the explosion.

According to a statement issued by NRC management, there were no casualties or injuries onboard the train.

"The Nigerian Railway Corporation (NRC) Board and Management hereby inform the general public, particularly our valued passengers on the Abuja-Kaduna train service, that an explosion on the rail track on the Abuja to Kaduna last train (AK10) of 20th October 2021 caused damage to the locomotive's fuel tank."

"However, the situation was brought under control by a relief locomotive that rescued the train in Kaduna State's Rigasa Station."

"After proper procedures, checks, and maintenance have been completed, the NRC aims to resume train services as soon as possible."

"We are also delighted to notify the public that neither the passengers nor the train crew have suffered any injuries."

"The locomotive in question has been sent to the workshop for inspection and maintenance.

"The NRC management apologizes for the inconveniences that occurred yesterday night and for the present non-operations of train services while we try to restore normal service," he said.

Earlier, a Nigerian Railway crew member in Rigasa, who requested anonymity, informed the Nigerian Tribune that on Wednesday, some unidentified men detonated an explosive near Rijana station, damaging the rail track.

Content created and supplied by: Ola_oluwadamilola (via Opera News )