By OmoobaAlekuwodo (self media writer) | 23 days ago

Security of lives and properties of the citizens of the Federal Republic of Nigeria is, undoubtedly, the primary objective of the government of the Federation. However, it is disheartening, the rate at which some of the security officers are being reported to be going off the course of their responsibilities, whereas, some of those entrusted with the sustainability of security of lives and properties are being found wanted for endangering the security they ought to be upholding. 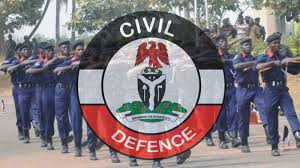 According to a report that was contained in one of the stories that was printed by the Nation Newspaper on November 11, 2021 it was stated that a yet to be identified officer of the Nigerian Security and Civil Defense Corps (NSCDC) shot a 32 years old man, who was simply identified as Nwa-Aba, twice for urinating near the state office of the corps at Calabar, Cross Rivers State.

Unfortunately, the young man who was said to be a labourer at the Petroleum Tanker Driver's Park in Calabar was not alleged to have committed any offense and he was, certainly, not having any case with the corps. He was shot twice just because he was urinating near the state office of NSCDC.

This is quietly frustrating because it could be hard to defend the condemnable act at which the officer shot a man who was only responding to natural call.

Regrettably, one may have wondered if the action of the NSCDC officer was a mistake or discharge error from his arm, but the fact that the victim, Nwa-Aba, was shot twice could be enough reason to further the demand for the punishment of the erring officer.

Surely, if the NSCDC officer is accordingly, prosecuted, he will definitely serve as lesson to other officers and they will up and doing, in the course of ensuring security of lives and properties of the citizens of Federal Republic of Nigeria.