A Woman Takes Off Panties Inside Store, Covers Her Face With It After Being Asked To Put On Mask[VIDEO]

By footballmaster (self meida writer) | 1 months

A South African woman took off her panties and turned it into a makeshift mask after she was told by security guards at a store asked her to put one inside the store. The woman wasn't carrying a mask so she decided to take off her underwear in front of other customers and put it on her face.

The video of the incident shot by another customer Sabrina Chiloane, which has since gone viral. Incidents of anti-maskers putting up fights and engaging in baseless arguments have been time and again reported across the world but this incident has left many shocked. 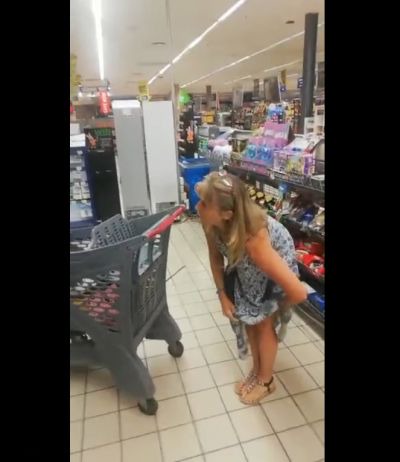 Last week a video started trending on social media of a woman in a supermarket in Cape Town without a mask. The video shows the woman confronting the security guards and other employees, when she is asked to put on a mask. She first says that she doesn't have a mask. "I don't have one," she is heard saying and then continues to stand in the line to enter the store with her face uncovered.

However, the guards can be seen and heard insisting that she needed to wear a mask to be inside the store or they would be completed to escort her out. The guards seem to be extremely polite but the woman isn't. Instead she starts arguing with them and demands that the staff remove their PPE.

Following that when the guards come forward and try to stop her, she does the most unimaginable things. The unnamed woman simply bends to reach under the dress, pulls her panties and to everyone's utter dismay puts it on her face as a makeshift mask.

And she does it all in front of the security guards and other customers present inside the store. "Are you happy now?" she asks the security and starts shopping.

While the woman took off her underwear, one of the customers, Sabrina Chiloane, took her video and posted it on Facebook. At least one bystander who watched the incident unfold appeared disgusted by her actions.

"The bacteria on a mask is less than her knickers!" she commented. "Hey, well done! Brilliance, woman!" The video has since gone viral with many slamming her, while some are laughing at the innovative idea she found to turn her panties into a makeshift mask.

"I will rather wear a mask and be safe than sorry. I'm not a scientist or doctor. So what do I know? I know people are dying of a virus. So I will wear my mask and protect my family as much as I can," wrote one user slamming her.

"This makes me sick. She is aware of the law world wide. We sit with a serious virus and a g-string will save her. Come on grow up. What must your family think?" commented another user.

"Creativity under pressure 6/10 Class 0/10 We're all adults. Rules are rules. Just get on with it. No one wants to baby an adult," wrote another. The video has so far been viewed by more than 31,000 people and is widely being circulated.

View Celebrity Edited Photos That Are Getting People's Attention