Video: Dozens of worshippers falling to the ground as Israeli synagogue collapses

By Optimallove (self meida writer) | 1 months

This is a breaking news coming from Jerusalem in Israel as a Synagogue bleachers collapse under worshipper. A video broadcast on Israeli TV shows dozens of worshippers falling to the ground when crowded bleachers were collapsed in what emergency services are describing as a "mass casualty event."

According to Ben Wedeman, a seasoned CNN's correspondent who was reporting live from the scene at the orthodox synagogue in the West Bank settlement of Giv'at Ze'ev, to the northwest of Jerusalem, said it was such a horrible incidence ever happened in history! 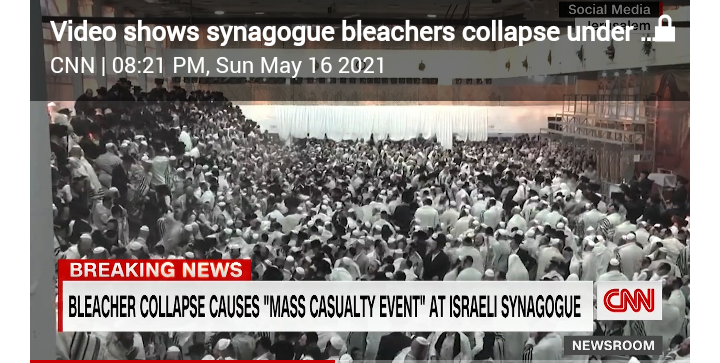 Recall that in the past few days, both Palestine and Israel have been at the loggerheads with one another. Though the fight has been on for century but the recent one happend 2 days to the end of Ramadan when Muslim Palestinians were attacked in the Aqsa Mosque ( 3rd holiest Mosque on Earth to Muslims) by armed Israelites!

It has generated mixed reactions through out the world as countries are divided along religious or political lines. Dangerous and mass destructive weapons are being launched as hundreds of lives and properties have been lost within a week!

Euro2020: Check Out The Latest Standings In All Groups As Germany Bounces Back

Opinion: Olamide's New Album Is Not Getting Enough Attention Because It Doesn't Sound Like Him

Before You Sleep This Saturday Night, Commit Your Life Into The Hands Of The Almighty God

“He’s Still The Greatest Player Of All Time” Football Fans React After Ronaldo Shines For Portugal.